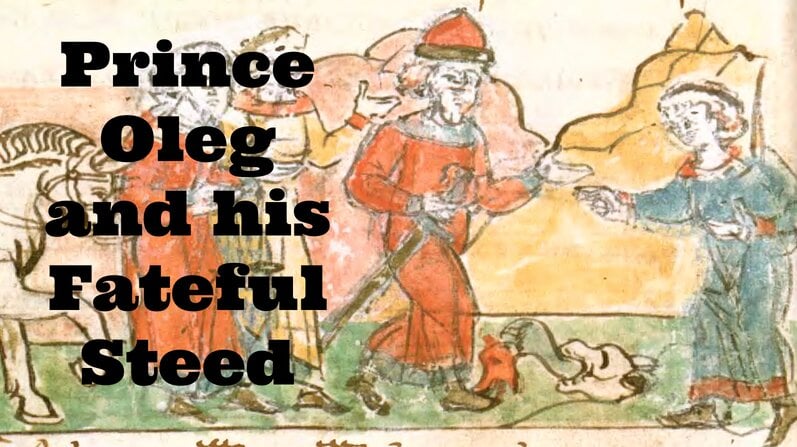 Horses were means of transport, source of agricultural labor, and the status symbol of the military elites. We know this much about the relationship between the horse and the rider or handler in the Middle Ages from archeological evidence, visual sources, literature and documents. Assessing the emotional and affectionate aspect of the relationship between humans and equids in medieval society is much more difficult.

The Primary Chronicle, reporting the history of medieval Rus’ up to the twelfth century is a good example of a historiographical text that blends fact and fiction, education and entertainment, reporting supposed historical events in a lively manner, supplying them with subtle, and sometimes not so subtle, value judgements. The death of Prince Oleg of Novgorod and the involvement of his horse in this tragic event provides the historian with an opportunity to glimpse the ideal relationship between the princely warrior and his horse through the chronicler’s denunciation of its opposite, the betrayal of the faithful horse by the selfish and superstitious owner. Among the sources of the Primary Chronicle are earlier chronicles of Rus’, Byzantine annals, byliny (oral epic narrative poems), and, significantly, Norse sagas, as the early rulers of Kievan Rus’ were of Scandinavian descent.

According to the Primary Chronicle, Prince Oleg ruled between 879 and 887. The date and cause of his death are uncertain, with some sources relating it to a snake’s bite. The Primary Chronicle, however, gives a more vivid account of the circumstances in which the snake bite occurred and the events that led up to it, narrated in the spaces of two folios, 8r-8v in the Laurentian codex and illustrated with a single miniature that compresses the events of five years into one strip in the Radziwill codex.

According to the chronicle, one day, pagan priests (volhvs) tell Oleg of how he will die: “Prince! You will die of your beloved horse whom you ride.” Oleg decides to send his faithful mount away, but instructs his servants that the horse should be well-cared for and fed, even though the prince himself is determined never to see the steed again, saying “Never again will I mount him nor see him.”

Subsequently, he goes on a campaign against Byzantium, and, in five years, when he is back, he remembers his horse and asks about him: “Where is my horse, which I have ordered to feed and to take care of?” He learns that the horse has died and, with feelings that may include a mixture of relief and remorse, says: “Everything that priests say is a lie: my horse has died, and I am alive.” Everyone familiar with classical literature, as the chronicler apparently is, would know that it is at this exact point that Oleg should be most careful, because the prophecy may be fulfilled in a most unexpected manner. And it is.

Oleg orders that he be taken to the place where the horse has died and, in an uncanny way, sees its bare bones lying on the ground. To complete his triumph against pagan priests – and against death, Oleg places his foot on the horse’s skull, only to be bitten by a snake that has been lurking inside the skull. He dies from its poisonous bite.

This hair-lifting story has metaphorical and didactic significance, and it can be deciphered on several levels. The poisonous snake can be equated with the devil and pagan religion, represented by the false pagan priests who prophesy to Oleg about his death. In turn, this bite could be viewed as punishment for Oleg’s sins: the sin of pride in trying to outwit fate and God’s will, and also his presumption and cruelty in attacking Byzantium, a Christian state from which Christianity would come to Rus’.

It could also be punishment for Oleg’s treason of the single creature that had been loyal to him and that has never betrayed him, his warhorse, which, as the chronicler says, Oleg had loved well. We know from medieval bestiaries, which drew on such ancient authors as Plutarch for their material and which were also known in medieval Rus’ in translation into Rusonian that horses were considered among the most loyal creatures. Bestiary authors even claimed that a warhorse would shed tears when its master died and would not tolerate a different rider on its back, confirming this with examples from ancient history. If horses were believed to have this level of intelligence, loyalty and affection, Oleg’s alienation of his steed is nothing other than betrayal. Although the chronicler does not say it directly, the horse may be understood as having died from sorrow of being deprived of its master, and the joy of riding into battle together.

However, context is also important, and this episode can be considered from two different perspectives. First, we can look at other material in the chronicle and in other textual sources of medieval Rus’, many of which were copied together with the chronicle in later manuscripts. Second, we can look for similar episodes and practices in sources outside medieval Rus’. In the Primary Chronicle, immediately after completing the story of Oleg’s death, the author attacks pagan customs and superstitions, starting with the words:

“It is not surprising that pagan practices result in witchcraft.”

This diatribe against paganism, which is about to be ousted by the light of Christianity brought into Rus’ by Princess Olga, and later established firmly by Prince Vladimir Monomakh, is no doubt strengthened by association with Oleg’s unheroic death. Had Oleg not listened to pagan priests, had he submitted himself to God’s will, he may have died on the battlefield in a more honorable, and possibly less painful manner. The account of Oleg’s death concludes with the statement that he had ruled for thirty three years – the term of Christ’s life on earth, – which invites comparison between Christ’s meaningful death on the cross and Oleg’s meaningless death from the snake, an animal personifying the devil in the Bible.

On the other hand, although the chronicler does not make a description of particular pagan rituals here, the entire episode echoes the Indo-European horse sacrifice, which was practiced in Scandinavia, as attested in archaeological records. Indeed, the military elite of early Rus’  were not Slav but Scandinavian, and their different culture and mentality are highlighted in the Chronicle. Thus, Olga’s cruelty against her enemies after her husband’s death and her cunning deceit of the Byzantine Emperor who wants to marry her is not typical of a female Christian saint, despite the fact Olga is revered as a saint in the Eastern Christian Church for her apostolic mission. Instead, these actions are typical of a Scandinavian konung in the sagas: Olga, a descendant of Scandinavian warriors, acts as a female konung in avenging her husband and deceiving her enemies.

A close look at Norse literature reveals at least one similar episode, in the thirteenth-century Orvar Oddr saga, whose eponymous hero likewise dies because of his horse. In the saga, Oddr is prophesied to have a life of 300 years and to die from his horse’s skull. To escape death, Oddr kills the horse and buries it. He experiences various adventures, overcomes many opponents, and witnesses the death of his companions of old age. After 300 years pass, Oddr goes back to his home island, where he buried the horse. In the meantime, the soil over the horse’s skull has eroded, exposing the skull. Unwarily, Oddr takes the skull up, and the snake that has been hiding inside crawls out and bites him, causing his death.

There are similarities and differences between the two texts. The prophecy, the fact that both heroes are successful warriors and military leaders, their desire to outwit fate, the snake bite, and the presence of the hero’s horse, which is sacrificed by the selfish hero are common points. There are differences, too. The Norse hero kills his horse; Oleg orders that good care should be taken of his horse. There is the implication that Oleg still cares for his horse, whom he loved well, and that this parting makes him, as well as his horse, upset. Oddr lives an unnaturally long life, whereas Oleg’s lifespan is normal, even though the number of years of his rule given by the chronicler, thirty-three, are symbolic and constitute an allusion to Christ’s years on earth.

These stories show the relationship between an elite horse and its owner broken by the man’s treason. The horse is faithful, the man is false. There is an implication of the horse being a victim, a sacrifice in the man’s bid for eternity. There is also a moral message to it: each man believes that the horse would kill him, but in reality he acts so as to bring nearer his own death while sacrificing his loyal companion. In the long run, the stories teach us trust and humility in the face of destiny. While riding horses can be dangerous, and deadly falls from horseback are described in both hagiographies and chronicles, it is the fear that is most likely to kill a man. Some redactions of the Primary Chronicle include the Instruction of Vladimir Monomakh. In this long epistle to his heirs, he describes his own adventures on and off horseback, while hunting and on campaign, where he was wounded, fell dangerously off his horse and run other types of perils, concluding:

Children, fear neither death, nor war, nor wild beast, but perform your man’s duty, as God will send you. Because, if I was saved from the war, from the wild beast, from water, and from falling off horseback, none of you can be harmed or be killed until this is ordained by God. And if death happens to you by God’s will, neither your father, nor your mother, nor your brothers will save you from it, and, if taking care of yourself is good, God’s care is better than human one.

Anastasija Ropa is a Guest Lecturer at the Latvian Academy of Sport Education. To find out more about Anastasija’s work, you can visit her Academia.edu page. She was recently a guest on The Medieval Podcast: Medieval Horses with Anastasija Ropa and Timothy Dawson