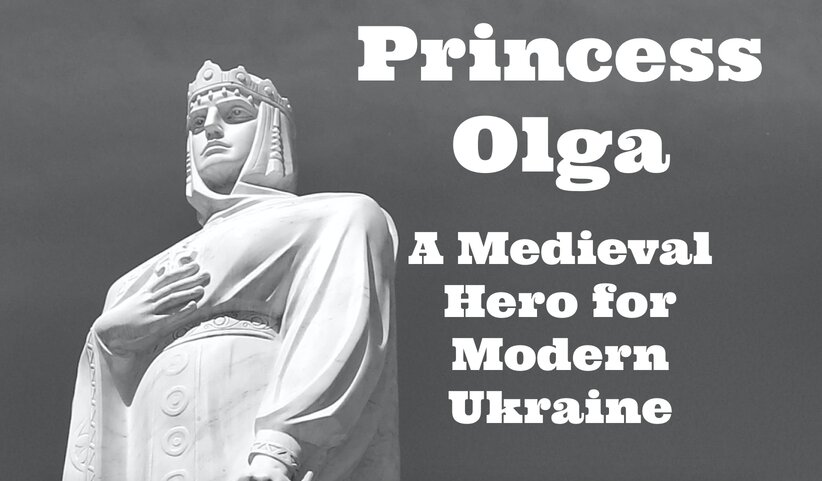 During her late April visit to Kyiv, the Speaker of the U.S. House of Representatives Nancy Pelosi was awarded the Order of Princess Olga by Ukrainian President Volodymyr Zelensky. Princess Olga, the tenth-century ruler of Kyiv and all Rus, is a fitting figure to represent the current Ukrainian challenge given her wit, wisdom, and fighting spirit.

The stories about Olga, whose name in its original Scandinavian form was Helga, are divided into two main themes, her revenge on the killers of her husband and her Christianization. Let’s examine both of those stories.

Olga was married to Igor, the ruler of Kyiv and all Rus who, though ostensibly the son of the mythical Riurik, lived most of a century later. Igor enters into this story only for his demise which came about because of the greed of his retainers who wanted tribute equal to what other lords gave their men. This led Igor to raid the Derevlians, a group subordinate to Rusian control, a second time in the year, causing them to fight back and kill Igor.

Igor and Olga had a son, Sviatoslav, but he was a minor and could not take power right away, thus Olga ruled as regent on his behalf. Sensing a vacuum of power, the Derevlian leader, Mal (the name resonates with evil intent in the original language) proposed marriage to Olga so that he could take over Kyivan Rus. The story of her rebuttal to that proposal, and her revenge on Mal and the Derevlians is broken into multiple stories; stories which are largely folkloric models and have been found elsewhere in medieval western Eurasia as well.

In the first story, the Derevlians arrived in Kyiv to propose marriage and Olga seemed interested, counselling them that they should act haughty with her people and demand to be carried from the river to her palace in their boat, rather than walking or on horseback. They followed her advice the next day, and the people of Kyiv lamented as they were forced to carry the Derevlian emissaries in their boat. However, upon reaching Olga, the people dropped the boat into a ditch that had been prepared overnight and Olga ordered the emissaries buried alive. This sets the tenor for the four total stories of Olga’s revenge.

The second story of revenge also occurs in Kyiv when Olga summons the great men of the Derevlians to pay her court. They arrive, surprisingly unsuspicious about the fate of the first group of emissaries, and Olga orders them to bathe appropriately before presenting themselves to her. Thus, a steam room (banya) is prepared for them, and after they enter, the doors are barred from the outside and the room is set ablaze, killing the great men of the Derevlians.

The third and fourth stories of revenge involve the slaughter of the Derevlian army by Olga’s, assumedly female, followers, and finally with the burning of the Derevlian town through a ruse in which birds are collected from throughout the town and given to Olga as tribute. She, in turn, has her forces tie burning brands to the legs of the birds who are released to fly home to the eaves of the houses in which they roost, setting the town ablaze. This story is perhaps the most folkloric of all as it occurs in multiple other places, including being used by Harald Hardrada, later king of Norway and husband of a Rusian princess, while he was working for the Byzantines in the Balkans.

In sum, through these ruses and revenge, Olga makes her name as a wise woman, as well as a clever and ruthless one. But this is only half of her story.

The Christianization of Olga

Olga was also the first Rusian ruler to be Christianized, but that story as well is one that evokes her wisdom and cleverness. It begins in the Tale of Bygone Years, the earliest Rusian chronicle source, which tells how she goes to Constantinople to meet with the emperor and to receive baptism. When she arrives in Constantinople, the emperor seeing her beauty and appreciating her wisdom falls in love with her. This might have been awkward given the emperor’s own wife, but luckily she is absent from the Rusian version of the story. Olga acknowledges the emperor’s devotion as her due, but points out that she is still a pagan, and cannot marry him unless she is a Christian; and because of her rank she would prefer for him to stand as godfather directly for her baptism. The emperor agrees and Olga is baptized.

Once the baptism is complete, the emperor proposes marriage and Olga’s cleverness rears its head once more. The scene is worth quoting:

‘How can you marry me, after yourself baptizing me and calling me your daughter?’ Then the emperor said, ‘Olga, you have outwitted me.’ He gave her many gifts of gold, silver, silks, and various vases, and dismissed her, still calling her his daughter.

The finale to the story comes when Olga returns to Kyiv and the emperor sends to her asking for presents in return, “slaves, wax, and furs” as well as soldiers. Olga though rebuffed him, telling him that he would only receive such presents if he spent as much time in Kyiv as she had in Constantinople; something seen as impossible given the sedentary nature of the Byzantine emperor.

Accepting that the source is immensely biased in favor of Olga, we need to take it with a grain of salt, if not a tablespoon, but there is interesting information here to use. Olga did go to Constantinople, we know, and she did meet with the Byzantine emperor, and his wife, as the Byzantine sources tell us. Though they mention nothing of a baptism, they do detail a long list of gifts given to Olga and to her entourage, most of whom were merchants, though she had her own priest with her as well.

This is not the end of the story of Olga’s baptism however, as Latin sources from the German Empire record that immediately after visiting Constantinople, she sent to Emperor Otto I asking for a bishop and priests to convert her people to Christianity. Otto complied and had a bishop ordained for the purpose and sent off. We know nothing of his time in Rus, and his visit is not recorded in the Rusian sources at all, but we are told that he returned to the German Empire a couple of years later, frustrated at the lack of progress he made in the Christianization of the population. Some have suggested that this was because of the rise of Sviatoslav, the son of Olga, who was a confirmed pagan, and who told his mother in no uncertain terms that his soldiers would laugh at him if he became a Christian.

All in all, the story of Olga’s Christianization and efforts to reach out to both the Byzantine and German empires are important as they showcase her position between two empires. She understands that both would like to try to exert their influence over her and control her, and her kingdom’s, actions. Thus, she needed to work with both of them, to play them off against each other, to maintain her own independence and to get what she needed. Coupled with the stories of Olga’s revenge, her cleverness and her cruelty; she seems an appropriate hero for modern Ukraine.

Inés García de la Puenta, “The Revenge of the Princess: Some considerations about Heroines in the PVL* and in other Indo-European Literatures,” Medieval Slavonic Studies (2009): 193-202.