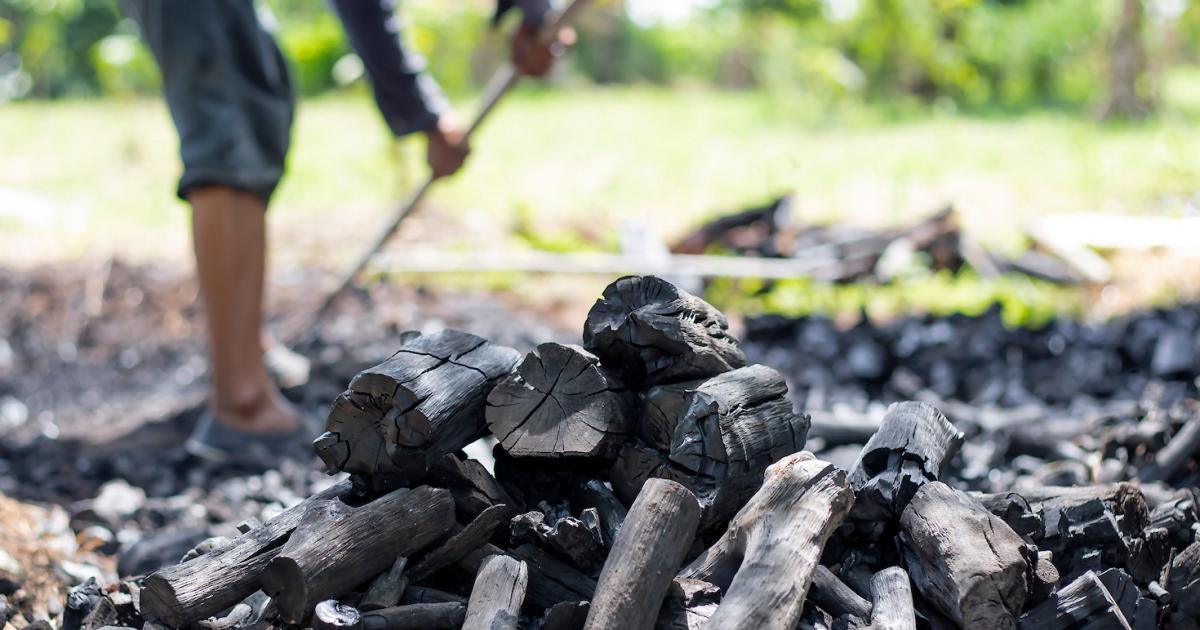 It is not well-known that wood charcoal, the energy source popularly used for barbecues, is also one of the most complex commodities traded internationally today.

Its supply chain is vastly obscure, with the result that most consumers and regulators have difficulty tracking where the charcoal is sourced and how it is made. There is very limited documentation about the charcoal trade due to the informal practices applied. Indeed, some traders still vaguely value and classify charcoal as a “wood product” or an “article of wood,” further distorting its true identity and purpose as a source of energy.

Because charcoal is made from trees, its increasing global production — 30 million metric tons (Mt) in 1993 vs. 54 Mt in 2019 — and its ubiquity in markets should steer the environmental community’s focus on the adverse impact of its rudimentary manufacturing practices on biodiversity, especially in tropical regions but also in semiarid areas.

In a recent report on the state of the world’s forests, the Food and Agriculture Organization (FAO) of the United Nations shows that more than 20,000 tree species were listed by the International Union for Conservation of Nature (IUCN) as endangered and vulnerable. The pursuit of charcoal and firewood in sub-Saharan Africa and logging in sub-tropical Asia and Latin America are the major drivers of forest degradation.

Forest-based fuels have been a substantial part of the global energy supply for centuries, and in sub-Saharan Africa, their demand and consumption exceed modern energy alternatives, because they are used concurrently with electricity and gas, depending on factors such as the erratic electricity supply.

Firewood and charcoal are typically inexpensive, and the technologies that support their consumption, such as traditional charcoal stoves, are highly accessible; indeed, firewood can be consumed without stoves, because rudimentary materials such as bricks and/or stones are sufficient to balance the cooking utensils, especially in rural areas. Furthermore, the favorable link between charcoal and the taste of food has sustained its popularity in homes, such as for barbecues, and in restaurants around the world.

Even though most tree species can be used for its production, charcoal does not have to be made from trees. Recent innovation is making it easier to use household and agricultural waste for its production, thus rendering the traditional pyrolysis of freshly felled trees in single-use earth-mound kilns expendable. This development could decouple charcoal production from forest loss and degradation as well as eventually eliminate the practice of lighting logs in open forests, which carries risks of wild bush fires.

In Uganda, for example, Green Bio Energy (GBE) produces charcoal briquettes from waste materials only, specifically from charcoal waste particles and carbonized organic waste. (Disclosure: One of this article’s co-authors, Ziwa Hillington, is working on various projects at this company.)

All waste is collected from households and community markets to make the briquettes, which are consumed on the same locally made traditional charcoal stoves that are financially accessible to consumers. As a fully integrated social enterprise, Green Bio Energy sells over 720 tons of such briquettes made from waste every month.

Agricultural waste materials are viable raw materials for charcoal production that provide great potential to ease pressure on tropical rainforests. In Germany, Kenya, Tanzania and Ghana, for example, other enterprises such as Nero GmbH, BrightGreen, ARTI Energy and Zaacoal are producing energy from available waste streams, such as olive pits and coconut shells, to fulfill the persistent demand for firewood and charcoal.

Compared to wood charcoal, using charcoal briquettes made from waste materials exhibits substantial environmental advantages (see the table below). In addition, taking into account their quality and the duration of heating, the briquettes are cheaper than traditional charcoal.

Just like wood charcoal, briquettes made from agricultural waste have a long shelf life, do not decompose and do not require sophisticated handling. They are lightweight and can be packaged in various quantities (1-50 kilograms), which caters well to consumers with less disposable incomes who typically buy and use at least 1 kg per day. Additionally, product packaging creates an opportunity to add labels that alert the consumer of the potential health hazards associated with the use of charcoal (carbon monoxide poisoning).

Around the world, agricultural waste is highly valuable for charcoal production. In addition to its energy potential, the charcoal it produces is viable for other purposes such as ironing, battery recycling and metallurgy. Moreover, portable technology is available to turn waste materials — such as coconut shells and rice husks — into briquettes, which would be a more efficient competitor and sustainable substitute for the rudimentary earth-mound kilns that are still common in sub-Saharan Africa.

Briquette quality and efficiency, which can be determined by the heating value and the length of time the fuel burns, is a critical factor for consumers on this market. In contrast to wood charcoal, where a specified stove load burns for an average of 1.5 hours, depending on its original tree species, the equivalent load of briquettes can burn for as long as three hours, which requires less refills of the stoves during cooking. Additionally, the use of briquettes made from agricultural waste can release less smoke compared to wood charcoal and firewood, which have highly random quality in the market, depending on the nature of tree species burnt.

Because global charcoal demand and production are still trending upwards for leisure and industrial purposes, it is very important to develop more portable technology that can transform biodegradable waste to energy.

Because briquettes made from waste materials are produced in more controlled carbonization processes compared to traditional wood charcoal, they can offer a reliable product quality, which provides a consistent cooking experience. Furthermore, unlike wood charcoal, briquettes are pressed into uniform sizes. Consumers can count briquettes, thus offering more opportunities to minimize energy waste per combustion cycle by managing the energy load depending on their needs.

Cutting trees to produce charcoal and firewood imparts tremendous pressure on rural agricultural communities, because they forego some important uses for their vegetation, such as food and medicinal applications, and risk leaving their land bare and less productive. Developing technology to use existing waste streams to produce charcoal briquettes provides important socioeconomic and environmental advantages to communities still heavily dependent on charcoal and firewood for their livelihood. Moreover, some briquettes from waste are viable as a potential replacement for fossil fuels, such as coal, in metallurgical processes depending on their fixed carbon content and heating value.

Because global charcoal demand and production are still trending upwards for leisure and industrial purposes, it is very important to develop more portable technology that can transform biodegradable waste to energy. Furthermore, it would be crucial for these companies to go beyond the regular informal practices by including the original raw material of charcoal on packaging and labels for consumers to choose products that minimize environmental pressure on tropical forests.