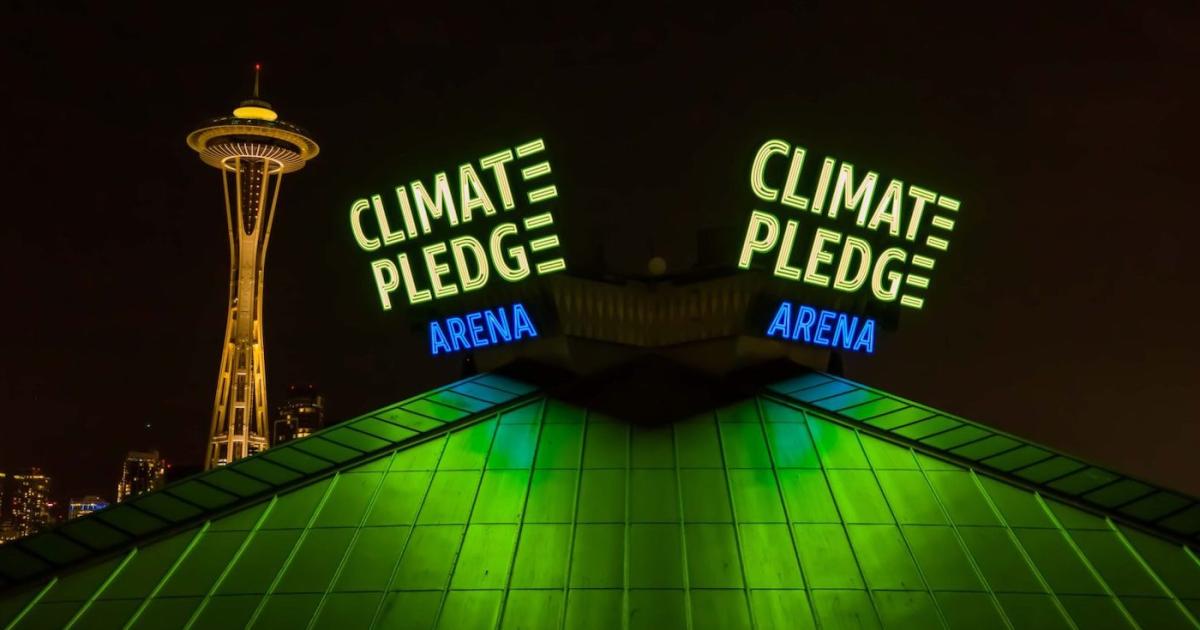 When the renovated home of the brand-new Seattle Kraken of the National Hockey League opened in October, it did so as the first sports venue to earn “net zero carbon” certification from the International Living Future Institute.

How did this come to pass? Will this just be a one-off or will Climate Pledge Arena become the vanguard of a spate of climate-forward arenas and stadiums? GreenSportsBlog spoke with Tim Leiweke of the Oak View Group, the project’s developer, and Jason McLennan, the project’s lead sustainability consultant, to answer these questions and more.

“We’re not going to solve climate change, but Climate Pledge Arena will inspire fans to make positive behavior changes. And, by going net zero carbon from Day One, we will inspire others who build arenas after us to follow suit.”

So stated Tim Leiweke, the energetic (that’s an understatement) president of Oak View Group, the company hired by Amazon to build an arena for the Kraken. We spoke a few days before the arena’s Opening Day in October.

Leiweke’s discussions with Amazon founder and CEO Jeff Bezos about what would become a $1.2 billion project to completely renovate 59-year-old Key Arena began more than two years ago. The company was planning to buy the naming rights for the arena that would, after a gut renovation, be home to the Kraken. But instead of calling it Amazon Arena, Bezos decided to name it after the Climate Pledge, a commitment the company made in September 2019 to become carbon neutral by 2040, 10 years ahead of the Paris Climate Agreement’s timetable. Given its massive carbon footprint — if Amazon were a country, the 60-plus million metric tons of CO2 it emitted in 2020 would rank it 53rd, roughly on par with the emissions of Morocco and its 35 million inhabitants — that would be a big deal if the mission is accomplished. And given the long-term skepticism with which Amazon is viewed by many in the environmental community, you can be sure there will be real pressure for the company to get to carbon neutrality even sooner.

Not surprisingly, Bezos had an aggressive environmental performance timeline for Climate Pledge Arena.

“Jeff Bezos brought me in and asked me if I’d like to renovate an arena to be ‘net zero carbon’ from Day 1,” Leiwecke recalled. “No one had ever done that before. I swallowed hard, said ‘yes’ and then brought in Jason McLennan to show us how to do it.”

McLennan, who played hockey while growing up in Canada, leads the architecture firm McLennan Design. He is the creator of the Living Building Challenge, one of the most progressive green building programs in the world, and is known for pushing green building standards to be more stringent. Designing sports facilities was not a big part of his portfolio but he had done some work for Tim’s younger brother Tod about eight years ago when the latter was CEO of the NHL’s Tampa Bay Lightning.

“I stayed in touch with Tod when he went to Seattle to become the Kraken’s president and CEO in 2018,” shared McLennan. “He told me, ‘We’re going to do big things here, designing a world class building that could become the new standard for the industry from an environmental perspective and you should be involved.’ I didn’t think they would be able to do it all, but they did.”

“Doing it all” meant that Oak View and McLennan, along with architectural firm Populous and general contractor Mortenson, made good on their pledge to make Climate Pledge Arena the first sports venue to earn “net zero carbon” certification from the International Living Future Institute. To pass the ILFI’s net zero carbon muster, a venue must:

In some respects, the Oak View team has gone beyond the ILFI standard, opting to reduce or eliminate as much fossil fuel use as possible rather than relying mainly on offsets.

“No. 1, we committed to using zero fossil fuels anywhere in the building and in the supply chain,” McLennan noted. “Natural gas was not an option at all.”

That means that all of the power used for heating and air conditioning (HVAC), cooking and dehumidification, as well as making and maintaining the ice, would come from electricity generated by renewables off- and on-site, as well as hydro. Per Tim Leiweke, the old building’s gas infrastructure was yanked out.

More McLennan: “No. 2, the building is zero-waste. No. 3, when Climate Pledge Arena opened, it did so without single use plastics.”

More green features: A holding tank that collects rainwater (there is a lot of that in Seattle, but you probably knew that already) was installed. The head chef procures 80 percent of the arena’s food from local vendors. Fan and team travel-related carbon emissions are being measured and offset.

But the most-high profile aspect of the renovation project also helped Oak View deliver on its net zero carbon commitment, and that was retaining Key Bank’s historic, iconic roof.

“Reusing the roof represents our greatest commitment to the planet,” Leiweke marveled. “We had to put it on support beams for two years and then dropped the roof on to the new building. This was a true marvel of design.”

Fans visiting the 18,100-seat building cannot miss its zero carbon story thanks to two giant sustainability walls. One tells the story of the Climate Pledge; the other is a green, living wall.

“Every broadcaster will see the walls; some will tell their stories, which means fans across the U.S. and Canada will learn about them,” asserted Leiweke. “The green wall boasts the largest collection of LED boards in the arena; they tell the climate history of the Pacific Northwest. Fans will see and hear about both walls on Kraken broadcasts and read about them.”

Instead of calling it Amazon Arena, Bezos decided to name it after the Climate Pledge, a commitment the company made in 2019 to become carbon neutral by 2040.

Even though Climate Pledge Arena has set the bar Mount Rainier-level high, both Leiweke and McLennan believe that the venue design and construction industry will continue to push the net zero carbon envelope.

“Climate Pledge Arena offers a ‘net zero carbon’ roadmap for all other venues to follow, both for new builds and importantly now for existing buildings,” McLennan declared. “Every venue should have a ‘decarbonization plan’ which includes ways to get to net zero. Outdoor venues should be easier since they need little to no air conditioning. I have to say I’ve never been involved in a project with more sustainability programming than the two walls in the concourse. This needs to become the rule rather than the exception in green arena and stadium design.”

Leiweke and Oak View are not resting on their net zero carbon laurels. A month after the ribbon cutting at Climate Pledge Arena, Leiweke was at another 3,000 miles away at UBS Arena, the new Elmont, Long Island home of the NHL’s New York Islanders.

“UBS Arena will be carbon neutral within two years,” claimed Leiweke. “Coachella Valley Arena in Palm Springs, California, which is slated to open in late 2022, is tougher in terms net zero carbon because we currently can’t control where the building’s energy is coming from. But we are working on it. In fact, we’re building out an enormous amount of onsite solar there; right now, we expect that 10-20 percent of the arena’s energy will be generated onsite. Over in England, the Co-op Live Arena project in Manchester will be net zero carbon when it opens in 2023.”