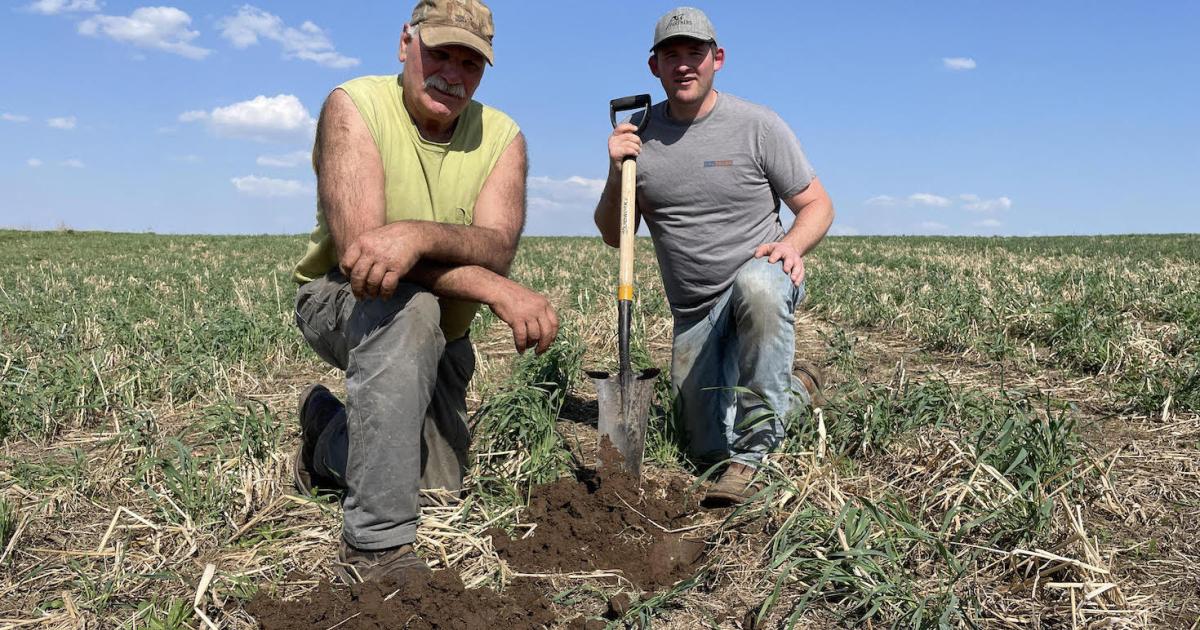 Regenerative agriculture is all the rage for large food companies. Their sustainability teams love telling me about ambitious goals of transforming hundreds of thousands of acres to regenerative stewardship and storing significant amounts of carbon in the soil. But I don’t often get a chance to hear from farmers about how they view the transition they’re expected to implement.

So last week, I went out to get a reality check of what’s happening in the fields. Over four days, I visited five farmers and various conservation projects in Minnesota. I also talked to folks from The Nature Conservancy and Truterra working on the ground to scale regenerative practices. Minnesota is the fifth-largest state in terms of agricultural production in the United States. Land O’Lakes, Cargill and General Mills are just some large food companies headquartered there.

I also drove hundreds of miles through the heart of Minnesota’s croplands in the center and south of the state. I learned more than I could process in the short amount of time I had before heading on to GreenBiz’s Circularity 22 conference in Atlanta this week, but I wanted to share my impressions while fresh. I’ll provide a deeper analysis of takeaways in a future edition.

Regenerative agriculture is more complicated than it sounds

First of all, I have a tremendous amount of respect for the farmers daring to do things differently. People like me — who spend their time working on sustainable food at an abstract level and are more familiar with IPCC reports than tractors — often have a hard time understanding why change is so slow. But for growers in conventional farming communities, the transition is an obstacle course.

For example, let’s look at the dozens of questions a farmer needs to answer if they simply want to start growing cover crops. They include: Which type of cover crop makes sense for your soil type, weather and crop rotation? When is the best time to plant it? What equipment do you need? Can you rent the equipment, or do you need to buy it? Where can you purchase seeds? How can you still apply manure over the winter without disturbing the cover crop? When and how do you get rid of it — spray it with pesticides, till it or let it grow out and harvest it? Knowing that the cover crop will absorb some of it, how do you need to adjust fertilizer application for your main crop? Will they affect yields? Whose advice can you trust?

It gets complicated fast, and that’s just one regenerative practice. Then, when you figure it all out and get cover crops growing, your neighbors call you crazy. Peer pressure is real. But premium payments seem to be more of a myth. It takes a special kind of person to go through such troubles and take on extra risk when there’s no imminent need or incentive to do so. And at the moment, business as usual without conservation practices still seems to be working out just fine for most farmers.

Islands of progress in Minnesota

These special people exist in small numbers. Ben Mergen is one of them. He’s running a 500-acre fifth-generation farm near Albany, Minnesota. Mergen mainly grows soy, raises cattle and experiments with strip-tilling, a conservation practice that only digs thin planting strips in a field rather than turning all the topsoil. He also grows cover crops and diversifies crop rotations, which has been working out well for him so far. “It makes good business and environmental sense,” he told me.

Mergen received support from the USDA’s Natural Resources Conservation Service and The Nature Conservancy and he participates in Ecosystem Market Consortium’s pilot program. He initially was inspired by another farmer in the county who has implemented conservation practices since the 1990s. Other neighbors haven’t gotten motivated yet. Mergen now offers strip-tilling contracting services for nearby farmers and hopes this might provide an easier entry point, alleviating some of the knowledge and equipment hurdles.

Tom Pyfferoen shared a similar story. He’s been farming for five decades in Pine Island and currently manages about 1,200 acres. He also got inspired by a conservation farmer nearby and thinks that a neighbor is in the best position to advise and convince surrounding farmers. He sometimes hosts field days to share insights that bring about 60 to 70 curious growers to his home.

Pyfferoen plants cover crops on as much of his land as possible and reduced tillage to about 5 percent of fields. He said he’s not getting paid by any crop buyers to implement these practices but sees a clear value add: “I used to run about 166 pounds of nitrogen per acre. This year, I only needed 107 pounds. Yields continue to come up,” he said. He was also able to cut his phosphorous and potassium usage by a third.

Farmers such as Pyfferoen and Mergen, and the organizations supporting their work, are important islands of progress within their communities. But organic peer-to-peer learning won’t get us fast enough where the climate crisis demands we go.

Despite talking to these passionate farmers, I felt profound sadness on my trip. The overall landscape I observed during many hours behind the wheel is desolate. Infinitely straight roads lead through endless, barren, extensively tilled fields. In an hour or more of driving, I could count the number of fields using cover crops, low-till or other conservation practices on one hand. In a few weeks, when crops will start to sprout, most acres will host conventional corn or soy, which have defined the local economy for decades.

If, as a society, we reduced our reliance on ethanol and meat that need corn and soy as feedstocks, we could restore much of this land to the rich prairie it once was. Restoring native grasslands would bring back home the bountiful plants and animals that provide invaluable ecosystem services. We could transform remaining farmland to grow more diverse foods that would invigorate the soil and feed local communities. But today, this feels unimaginable for even the most progressive environmental advocates I came across.

Instead of regenerating nature, conventional row-crop agriculture continues to dominate in Minnesota, causing severe pollution and environmental degradation. My visit coincided with a tremendous storm that brought 5.5 inches of rain the night before I hit the road, more than last summer’s entire rainfall combined. It led to severe flooding at a time when farmers were supposed to plant this year’s seeds.

When I went to Minneopa State Park three days after the storm to see a small patch of conserved grassland and its bison herd, I witnessed a moody brown waterfall full of soil that had washed from fields into local waterways. As the signs explaining different forms of agricultural pollution scattered across the park told me, this wasn’t a one-off incident. Practices such as cover crops and reduced tillage could help minimize soil erosion and fertilizer runoff.

The conversations I had with regenerative farmers and the practices I saw aren’t representative of what’s happening in the state, region, let alone country. But if the current rate and scale of change I observed in Minnesota are any indication of how the regenerative transition is advancing, then things aren’t going well.

[Continue the dialogue about decarbonizing, decentralizing and digitizing energy systems to be more resilient, affordable and accessible at the VERGE 22 Energy Program, taking place in San Jose, CA, Oct. 25-27.]