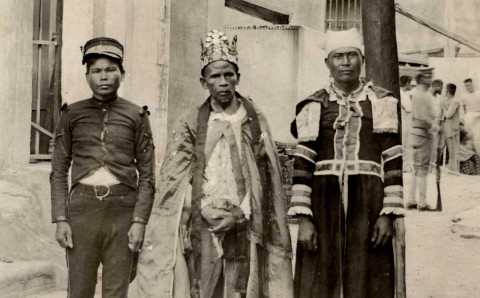 The Philippines is one of the least understood countries in Asia. It became infamous for the brutal ‘kleptocratic dictatorship’ (in Philip Bowring’s words) of Ferdinand Marcos and the multiple convictions for corruption of his wife, Imelda, whose extravagant collection of shoes attracted notoriety. Thousands of Filipinos, but especially Filipinas, emigrated to escape poverty by serving wealthy households throughout Asia, notably in Hong Kong, their remittances contributing greatly to the economy of their homeland. Rodrigo Duterte, president from 2016 to 2022, was even more notorious, having boasted that he authorised, or participated in, extra judicial killings of drug dealers and users. After a landslide election victory in May this year Duterte was succeeded by the son of Ferdinand and Imelda, Ferdinand Romualdez Marcos Jr, known universally as Bongbong.

The Philippines is a ‘jigsaw state’ of over 7,000 Pacific islands. Philip Bowring’s reliable and lucid new book draws on his long experience as a journalist in the region, beginning in 1973 and culminating in the editorship of the much-missed Far Eastern Economic Review, once the best English-language publication in Southeast Asia.

In the 16th century the Malayo-Polynesian language speakers of the Philippines were colonised by Spain, which placed greater emphasis on religion than other colonial powers. The continuing influence of Catholicism is testimony to that legacy, although parts of the south remain Muslim. A prosperous mestizo class, with aspirations for independence, emerged from the colonial encounter. But in 1898 Spain’s defeat by the United States in a war over Cuba encouraged the US to conquer the Philippines. Some mestizos collaborated with the new power, while others sought independence. Thousands died in a conflict that lasted until 1906.

Spanish-language education for the elite had impeded the full development of a national Filipino language, based on Tagalog, the dialect of the main island of Luzon. Under the Americans, English replaced Spanish and the elite remained divided between the Nacionalistas, who demanded independence, and the federalist Progresistas, who envisaged the Philippines as a potential state of the US. Attitudes towards the US were ambivalent: Bowring describes resentment, admiration, nationalism, opportunism, greed and fear.

By 1934 the country was effectively self-governing and independence was promised within ten years. The Japanese invasion of the Philippines, just hours after the attack on Pearl Harbor on 7 December 1941, disrupted that timetable. Bowring deftly elucidates the impact of the occupation: the reality of collaborators and resisters and the creation of myths surrounding politicians such as Ferdinand Marcos and Benigno Aquino during and after the war. In the Battle of Bataan, fought between January and April 1942, Filipino and US forces were defeated and many prisoners of war died in the infamous death march. Popular resistance to the Japanese was largely in the hands of the Hukbalahap (People’s Anti-Japanese Army), which was led by the communists and turned against the US after the war.

Formal independence from the US came on 4 July 1946, but the Philippines remained a close ally and its economy was dependent on that of the US. By the end of 1955 the Hukbalahap had been suppressed and the Philippines was ruled by a series of presidents. Bongbong is the latest.

The Making of the Modern Philippines: Pieces of a Jigsaw State
Philip Bowring
Bloomsbury 256pp £25
Buy from bookshop.org (affiliate link)