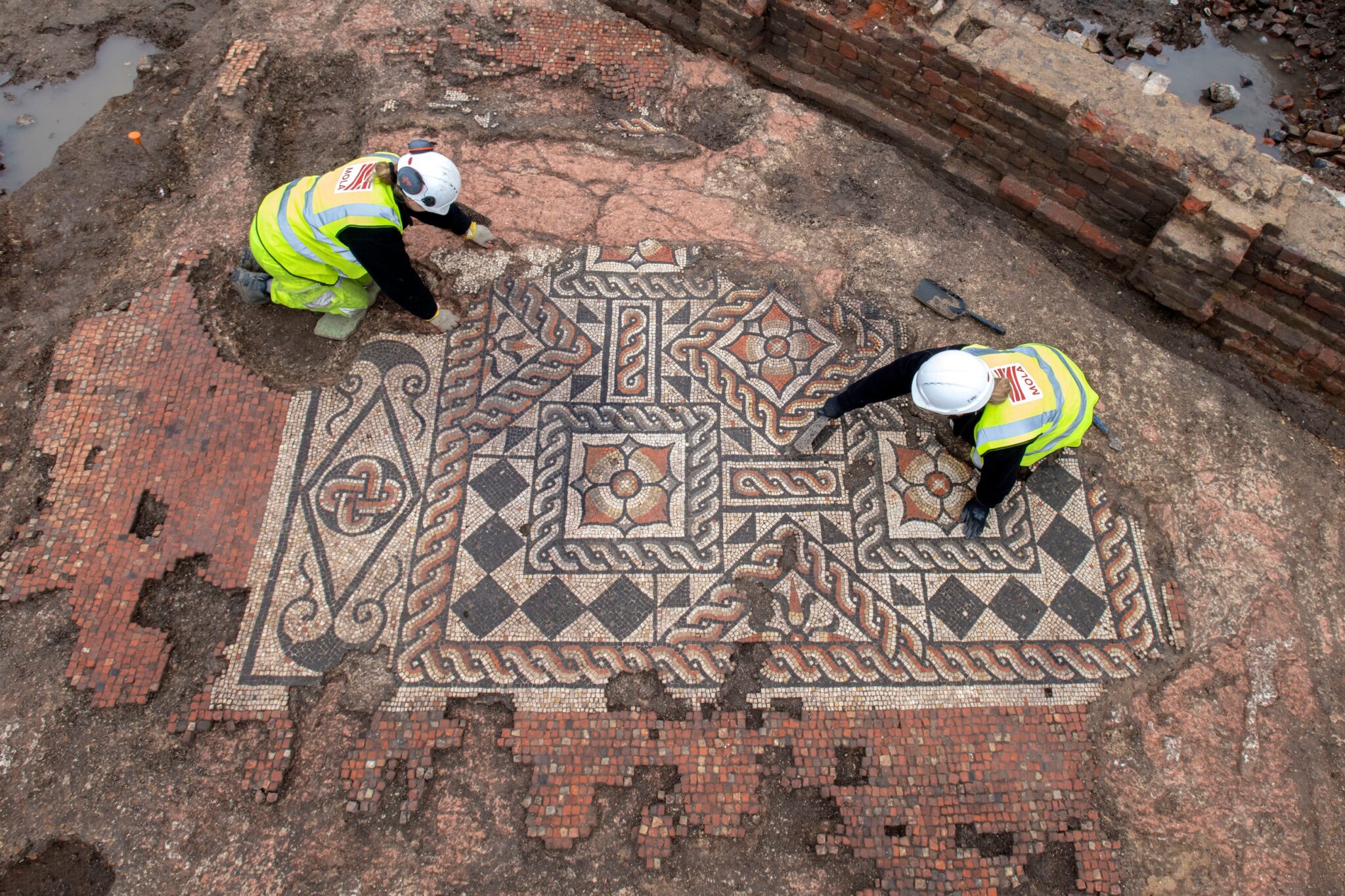 Archaeologists have unearthed the largest Roman mosaic discovered in London in more than 50 years. The mosaic geometric shapes, floral and knot designs in black, white and red tesserae set in a red tiled floor of a large room eight meters (26 feet) long that was likely a triclinium (a Roman dining room). A second, smaller panel is believed to have decorated a recess in the room. The main mosaic dates to the late 2nd, early 3rd century and was installed over the traces of an earlier mosaic.

The main mosaic features lotus flowers surrounded by guilloche borders. Between the lotus squares are black triangles, diamond shapes, smaller guilloche rectangles and to the side, a Solomon’s knot (a horizontal and a vertical loop enlaced with each other through the middle) inset in a black circle bracketed by a black lozenge-shaped outline. Archaeologists believe it is the work of a team of local mosaicists known as the Acanthus group who developed a characteristic style.

The second panel is more simple design. It is primarily black against white tile background with red tile accents. There are two Solomon’s knots, two flowers with four petals inside circles and small four-leafed clovers in between. This mosaic is virtually identical to one found in Trier, Germany, which suggests itinerant mosaicists traveled across the Roman Empire to decorate the homes of the wealthy even in far-flung cities like London.

A team from Museum of London Archaeology (MOLA) made the discovery near London Bridge in Southwark, at the site of a new multi-use development. Excavations began in June 2021 and until last month, only small artifacts had been recovered, including harness fittings and bone game dice. A few weeks ago, archaeologists encountered a few tesserae from a Roman mosaic, which is not unusual in a dig of this scale, but when they continued to clear around they tiles, archaeologists quickly realized this was a mosaic floor of large size, not just a few tiles left behind.

The remains of a substantial Roman building was found at the site in 1988, and later excavations revealed additional architectural elements, including a tesselated terracotta floor and fragments of painted wall plaster. The building was made of multiple rooms around an internal courtyard and a well-landscaped exterior garden. It was built ca. 72 A.D., just 25 years after the founding of Londinium, but was later modified, including the creation of the mosaic floor discovered last month.

Archaeologists thought at the time of the initial discoveries in the late 80s that the building was a mansio,  the upscale Roman version of a motel where traveling military officers and government officials would stay when visiting London. What is now London Bridge was an important Thames crossing in Roman times too, part of the road network that traversed Londinium, so the perfect location for a mansio just across the river from the city center of the capital of Roman Britian. While it’s still possible the structure was a private villa urbana, recent findings support the mansio hypothesis. Objects like phallic pendants, high-end pottery, coins and other forms of portable wealth underscore that the site saw a great deal of traffic from elite members of military and civilian society.