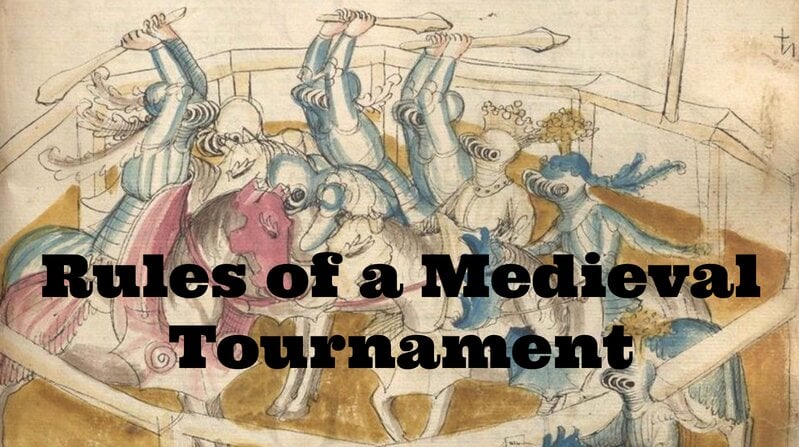 It is not surprising that tournaments in the Middle Ages were often organized haphazardly. It is assumed that any rules were only agreed upon once the participants had gathered. However, by the fifteenth century, we can see attempts to make a more standard set of regulations. This can be seen in the ‘Tournament Regulations of Bamberg 1478’.

In that year, a German tournament society known as the Fürspanger created a new code for its “national” tournament, the first. It governed who could enter this mêlée, what their equipment would be, and how to behave during the matches. Various officials were to be appointed for an event, including four officers who were to watch over the tiltyard, a trumpeter to signal the beginning and end of the tournament, and “30 citizens with long staves [to] be in the tiltyard to protect the participants and ensure that those fallen from their horses not be trampled to death.”

To be able to compete in a tournament, one had to be of sufficiently noble birth, and could not be a heretic, adulterer, or merchant, nor those “who intended to seduce women or virgins by word or deed, who boasted about it, or who had actually done so by force.”

When the tournament began, everyone had to be present by the eighth hour in the morning for registration, and be ready to ride by 10. Swords were to be inspected, and had to be blunt so that they could not cut or stab. Competitors could carry one club, but it could not have nails in it, except for “one point on the top the size of a thumb.”

The riders were allowed to have squires to assist them, with the number depending on their rank: princes could have four squires, earls and lords three squires, knights two squires, and other noblemen just a single squire. These assistants could help their master move around the tournament, but they could not push away opponents with weapons or grasp the bridles of their horses. Meanwhile, the squires also got some protection:

Nobody is allowed to hurt any squire with his sword or club, to injure him, or push him down and trample on him.

There were even regulations against being too fashionably dressed. For example, “Nobody was allowed to wear any pieces of gold or woven velvet to adorn himself.” Even the women watching the event could not “have more than four skirts.”

Those who failed to obey the rules could “lose his horse and outfit and shall be disgraced by all the participants and by the ladies”. The regulations concluded with a plea “about not … carrying on feuds during a tournament”.

There is one last rule to note: “To make sure that all the participants pay their fee before leaving.”

To learn more, check out the article, “German Tournament Regulations of the 15th Century,”  by Joachim K. Rühl, in Journal of Sport History, Vol. 17:2 (1990). You can read it on JSTOR.

This article was first published in Medieval Warfare magazine Issue VII:3 – you can buy that issue here. You can also get new issues of the magazine through our Patreon – click here to learn more.