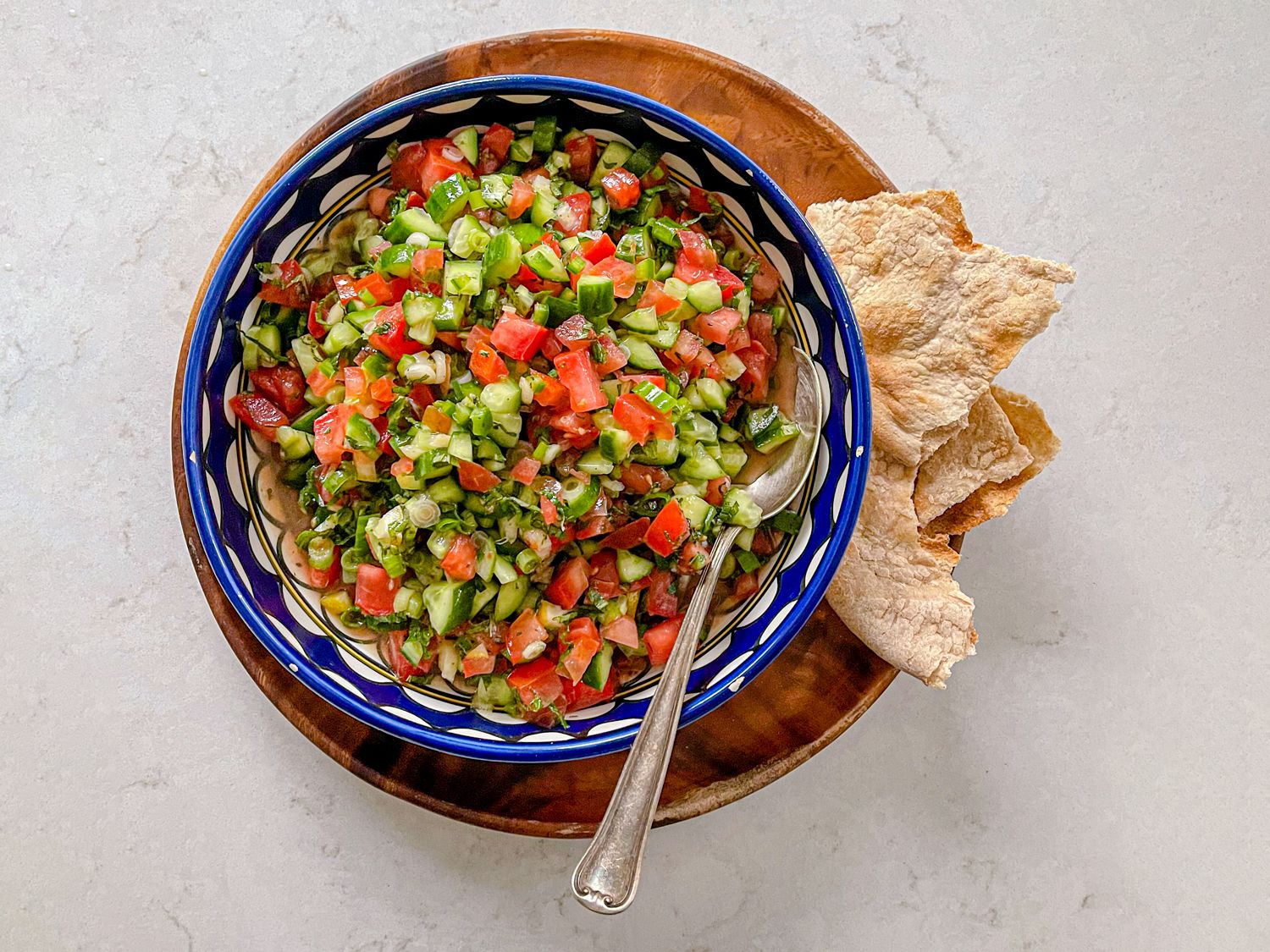 Cucumbers made their way westward to the Arab world from India sometime in the Middle Ages. Tomatoes then traveled eastward from the New World to Europe and Asia in the 16th century, and did not really enter Arab cuisine until the late 18th century. Yet today, so many cultures, from Mediterranean and Balkan to Central and South Asian, have some version of a salad made from cucumber and tomato. Indians call it “kachumber,” Iranians call it “shirazi” and Turks “çoban salatasi,” Balkans and Central Europeans call it “shopska salad” and the Greeks call it “horiatiki.” While it is not too far-fetched that cultures, when exposed to similar ingredients, might come up with similar dishes, the historic trade routes that connected all these areas undoubtedly led to cross-cultural influences and culinary diffusion as well.

Most of these names are practical, referring either to the method of preparation (chopped), by whom (farmers), or where it is eaten (villages). For Palestinians, two of those naming conventions are used, with some referring to it as “salata na’ameh” (finely chopped salad) or “salata falahiyeh” (farmers salad) or simply “salata” because it is the quintessential salad in our cuisine.

Indeed, this salad has been consumed by Palestinian farmers since tomatoes entered the cuisine a couple hundred years ago. Naturally, within Palestine, nobody refers to it as "Palestinian salad," but many Arabs across the Middle East might use this term because it is the most commonly eaten salad by Palestinians, as contrasted to tabouleh in Lebanon or Fattoush in Syria, for example, although overlaps exist across the region.

The contention over this dish and its naming arises because it is frequently referred to abroad as “Israeli Salad.” Yes, Israelis do eat this salad, but the history of how it made its way into the Israeli kitchen—by way of the surrounding Palestinine culture—is largely glossed over when that name is used. The most ironic part of it, though, is what this salad is referred to in Israel: “salat aravi,” or Arab salad.

Within Israel there is not the same confusion about the origins of this salad, and the history is, in fact, an interesting one. When the first waves of Jewish migrants came into Palestine in the late 1800s and early 1900s, both from the woes of the 19th century and persecution, there was this feeling of returning to a biblical homeland that had been safeguarded by the native (Palestinian) population. Along with this came the desire to emulate these people and integrate with the land and customs. Many Jews lived side-by-side in peace with Palestinians, often adopting the same dress, music, and, of course, cuisine.

As the newly arrived immigrants worked with the local Palestinian population in agriculture, they also started to eat the same foods. Later, when kibbutzim—utopian Jewish socialist agriculture-based communities—developed, their inhabitants continued to prepare and eat these same foods. From the kibbutz mess hall, this Palestinian chopped farmer salad made its way into hotels and more mainstream Israeli kitchens. Still, it was always referred to as Arab salad, in reference to its roots. Israeli academics, historians, and food writers have long attested to this history, acknowledging its Palestinian origins. Those who have taken this dish from its marginalized and occupied creators, and willfully ignored those origins by renaming it “Israeli,” can not claim culinary diffusion, it is the definition of appropriation.

Many Palestinians abroad today might refer to the hallmark salad of our cuisine as “Palestinian Salad,” to correct that kind of misconception, yet more often than not, we find no need to describe this salad in terms of nation or any other signifier, because it simply is our “salata,” the one we serve alongside hashweh and maqlubeh and kafta, and of course, stuffed into our falafel and shawarma sandwiches.

As I mentioned, many cultures have their own version of a tomato and cucumber salad, but there are differences that set them apart, from the size of the dice to the dressing, additional ingredients, and choice of herbs.

Here are some of the elements that set the Palestinian one apart: It is very finely diced with the tomato and cucumber cubes no larger than a dry chickpea. The herb of choice is mint, fresh or dry, although a sprinkling of parsley can be included if available. Onions are non-negotiable. In fact, while cucumber has become a primary ingredient nowadays, in its most basic iteration, the salad requires nothing more than tomatoes, onion, and mint. The dressing is nothing more than olive oil, fresh lemon juice and salt.

Over the years, as other vegetables have become more easily accessible, different families have taken to including more ingredients based on what’s fresh and available. I’ve eaten versions that include finely chopped lettuce, others with bell peppers, others still with avocado or radish. My mother-in-law will often chop an entire lemon, skin and pith included, for a real citrusy burst, which is an option I’m giving in the recipe below. But even if all you have at home is tomatoes, onion, and mint, you can enjoy a very delicious salad alongside any Arabic meal you make.

Tomatoes are a seasonal ingredient and summer tomatoes are definitely superior. To enjoy this salad out of season, I opt for either cherry or plum tomatoes, as their quality tends to be consistent throughout the year.

Some raw-tomato recipes on Serious Eats praise the benefits of salting the tomatoes in advance, which draws out water and concentrates the tomato’s flavor. This can be especially helpful if you want to avoid a puddle of tomato juices collecting on the bottom of the plate at the table, as newly-applied salt pulls out moisture. In the case of this salad, though, we want the pool of liquid at the bottom—it adds even more flavor to the rice it so often accompanies.

Another trick you’ll sometimes see is to rinse onions with hot water to remove some of their pungency by rinsing away the natural chemical compounds that form as a defense mechanism once the onion’s cells are damaged. I don’t recommend that for this salad because their pungency is desirable here, adding to the complexity of the salad and creating a counterpoint to the tomato and cucumber’s fruity mildness. One trick that is useful, if you are chopping the vegetables ahead of time, is to coat the diced onion with a tablespoon of the olive oil, which helps prevent the onion from developing an overly pungent aroma as it sits.

The final note I leave you with on this salad is that it is very forgiving. I make it at home on a weekly basis and I never measure. I don’t weigh my tomatoes or cucumbers, and I don’t use measuring spoons for the liquids. Instead I use whatever vegetables are freshest in my fridge, and I simply eyeball things. I have included measurements and weights below, but only as a starting point for those who crave that level of detail. The reality, though, is that this is a dish where you can trust your instincts and taste as you go along.

In a large bowl, combine tomatoes, cucumbers, onion, chile (if using), and lemon (if using). Stir in mint, olive oil, and lemon juice until thoroughly combined. Season with salt and serve right away.

If making this salad out of season, opt for cherry or plum tomatoes.

Make Ahead and Storage

The tomatoes, cucumbers, chile pepper, and lemon can be chopped and held, unseasoned and undressed, in an airtight container for up to 2 hours; the onion can also be diced up to 2 hours in advance, but should be held in a separate airtight container and tossed with 1 tablespoons olive oil to prevent it from becoming overly pungent. Stir onions, olive oil, lemon juice, mint, and salt into tomatoes and cucumbers right before serving.