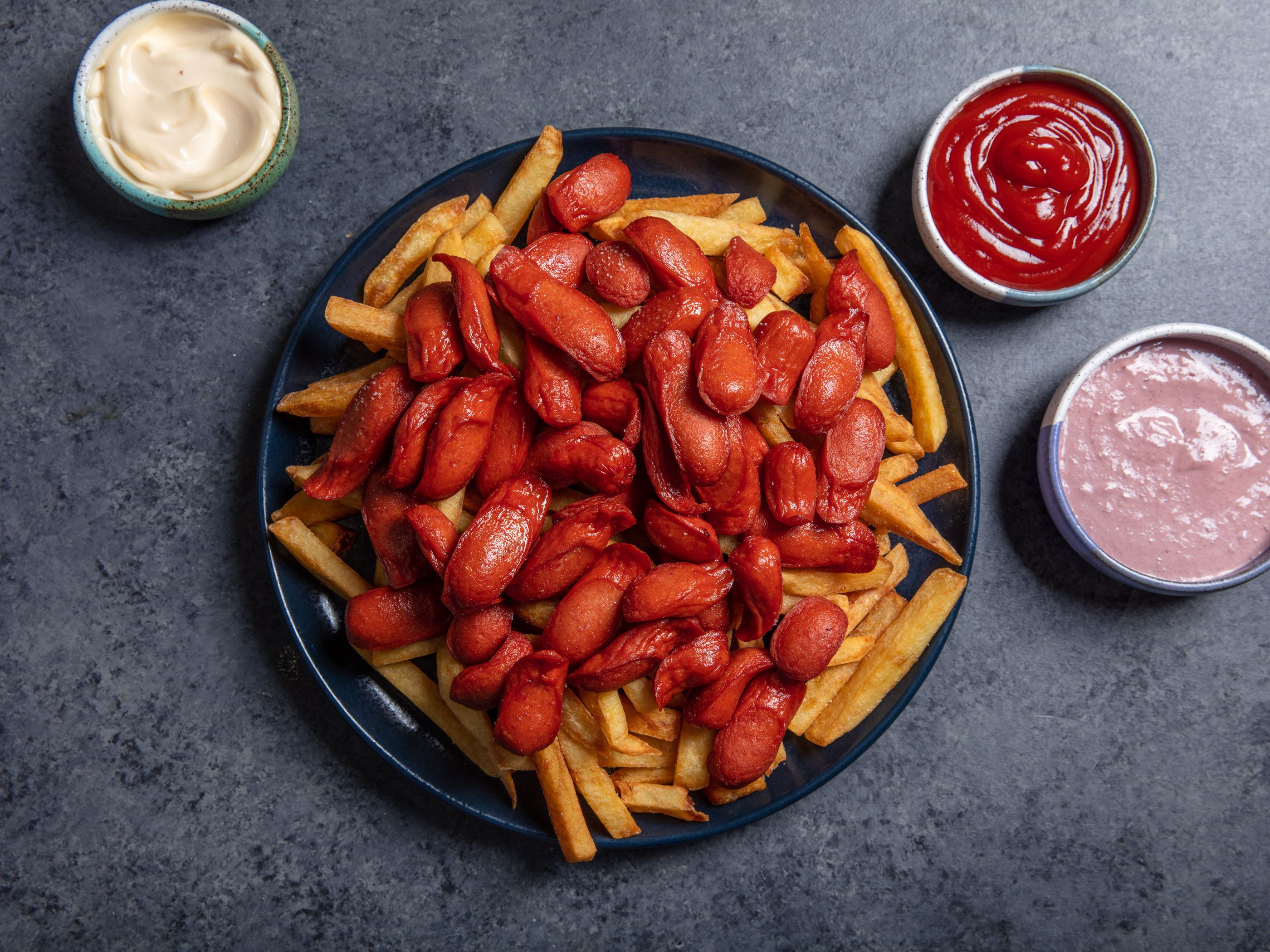 There’s a world in which the instructions for homemade salchipapa consists of little more than this:

And there would be nothing wrong with that recipe, because salchipapa is fast food, it’s street food, it’s bar food, it’s restaurant food, and it’s very much the kind of snack that, if you’re craving it, is probably something you want right now and rather than something you want to be spending a couple hours making from scratch. (If you are going the quick-and-easy route, I should note that this would be a great time to break out the air fryer for both the fries and the hot dogs.)

But while there’s nothing wrong with making salchipapa at home in the manner above, there is something wrong with publishing a recipe like that—especially on a website defined by its willingness to go deeper. So this is how to make salchipapa the hard way, because that’s why you’re here, right? Like I said, though, if you want to read this and then tear into a bag of frozen fries, please do.

Just in case you’ve had the misfortune of not knowing of the existence of this platter of franks-frites, here’s a bit of background. Salchipapa is a portmanteau of salchicha (sausage) and papa (potato). According to Peru’s national tourism site, it first cropped up in the 1950s as a street food in Lima, where it became popular among time- and money-pressed workers. The affordable, filling, quick snack (it can, let’s be clear, suffice as a meal) soon became popular enough that it spread from the street carts to restaurants, bars, homes, and beyond.

Today it’s a popular dish not just in Peru, but abroad, with regional, national, and personal variations that each give their own spin on the basic concept. In some places, other meats are added, like chicken, various sausages, and cuy (guinea pig). In others, seafood sneaks into the mix. Some vendors squirt all the sauces on top, others serve them as dips on the side. I’ve heard of cabbage salad mounded onto the hot dogs, as well as fried eggs balanced on top and veils of of melted cheese. There are Colombian versions and Ecuadorian versions and Bolivian versions and…I mean, I think you get it: Take hot dogs, put them on a pile of French fries, then get creative. It’s a pretty obvious sequence of events.

The From-Scratch Version: How to Make Great Salchipapa at Home

Even in its most pared-down form, salchipapa is still something of a choose-your-own adventure dish. There are questions of potato type, which is much more limited here in the States than in Peru, where the domesticated potato was born and varieties abound. There are questions of the potato cut and size (skinny fries, large fries, wedges, and so on). And the same goes for the hot dogs. Do you cut them crosswise into little logs? Slice them into rounds? Do that cute little octopus thing where you make cross-cuts into logs so they form legs when fried?

For my recipe, I opted for creamy Yukon Gold potatoes over starchy russets. Russets are the more common choice for fries, but I noticed in my recipe research that in Peru yellow varieties are a popular choice for salchipapa, and while we may not have the same yellow potato options as in Peru, Yukon Golds are our closest alternative. They’re more flavorful than russets, and they have a creamier texture that I think works well with the hot dogs and dips. You lose a little bit of crispness in exchange, but in some ways that’s less important here—after all, we’re piling hot dogs on top of the fries in a way that will trap some steam and slightly soften some of them anyway.

That’s not to say crispness isn’t important, and this recipe goes to some extra lengths to get there. Built on the foundation of Kenji’s thin and crispy French fry recipe, the fries here start with a simmer in vinegar-spiked water. This cooks them through, with the vinegar slowing the breakdown of natural pectin in the potatoes and ensuring they don’t turn to mush. After that, instead of a mere double-fry, as in Kenji’s recipe, they’re triple-fried. Double-frying is more than sufficient for Kenji’s thin-cut russets, but the thick-cut Yukon Golds in my recipe benefit significantly from an extra spin through the oil.

The reason for my thicker cut here: I want to play up that creamy Yukon Gold interior, and also to make sure the fries are in proportion to the oblique slices of hot dogs. How ingredients are cut is almost always important in a recipe, and it’s especially true in something as simple as this two-ingredient platter. The hot dogs are casually piled on top of the fries, so there needs to be some way for them to relate to each other. With so little to play with, the qualities that will best link them are texture (tender, snappy franks paired with crisp and creamy fries) and size. While contrast is always an option, in this case there’s something weird to me about chunks of hot dogs on top of skinny little crispy French fries. By bringing their scale into the same ballpark, they seem more of a piece on the plate.

And maybe that’s the point of this whole recipe. While, yes, you can whip salchipapa up the rapid way with frozen fries and skillet’s worth of hot dogs, it’s harder to make those store-bought components seem like they have much to do with each other. They’ll still be mighty tasty, but pretty obviously disconnected. By going the extra mile of making it from scratch, you can dial in the details so that something harmonious happens despite the minimal interaction of the main ingredients.

Line a rimmed baking sheet with paper towels. Drain potatoes, and transfer to a large pot. Add 2 quarts (1.9L) cold water (and any extra that’s needed to just cover the potatoes), vinegar and 2 tablespoons (24g) salt. Bring to a boil over high heat. Boil for 10 minutes. Potatoes should be fully tender, but not falling apart. Drain and spread on prepared baking sheet. Allow to dry for 5 minutes.

Line a second rimmed baking sheet with paper towels. Heat oil in a 5-quart Dutch oven or large wok over high heat to 400°F (204°C). Add one-third of fries to oil; oil temperature should drop to around 360°F (182°C). Cook for 50 seconds, agitating occasionally with a wire mesh spider to prevent sticking, then, using the spider, transfer to the prepared baking sheet. Repeat with remaining potatoes (working in 2 more batches), allowing oil to return to 400°F before each addition. Allow potatoes to cool to room temperature, 15 to 20 minutes.

Repeat frying and cooling process at least 1 and up to 3 more times, working in batches and cooking potatoes each time for 50 seconds, starting at 400°F each time.

Adjust oven rack to middle position and preheat oven to 200°F (90°C). Set a wire rack in a rimmed baking sheet, and line a large bowl with paper towels. Return oil to 400°F over high heat. Fry half of the potatoes until crisp and golden brown, 2 ½ to 3 minutes, adjusting heat to maintain a temperature of around 360°F. Using a spider, transfer to prepared bowl to drain and season immediately with kosher salt. Transfer to the wire rack and set in oven to keep warm and crisp. Repeat with remaining fries.

Return oil to 400°F and add one-third of hot dog slices to oil. Cook until hot dogs are lightly darkened, about 30 seconds. Transfer to a paper towel–lined bowl, then repeat with remaining hot dogs.

Arrange fries on a platter. Top with fried hot dogs. Serve right away with olive sauce, ketchup, and any other sauces desired either on the side or squirted on top.

To make ají amarillo sauce, follow a similar procedure to the olive sauce, simply blending ají amarillo paste into mayonnaise to taste (the more you add, the spicier it’ll get).

Salchipapa is best enjoyed immediately. Olive sauce can be refrigerated in an airtight container for up to 5 days.