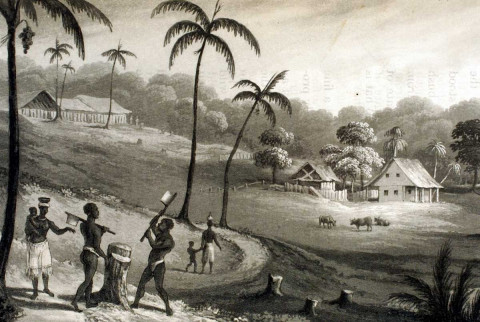 Scotland’s involvement with transatlantic slavery has become increasingly well known in recent years, but remains something of a controversial topic. Some Scots still prefer to characterise the history of their nation in terms of victimhood (of English imperialism), while others view Scotland’s past as being defined by profiteering and complicity within the British Empire.

The Scottish Highlands occupy a special place in this debate. Previous accounts have traced how profits from slavery improved the area. Allan Macinnes’ work on the clan Malcolm of Poltalloch revealed how slavery derived capital improved the status of the family, transforming them into landed elites. Karly Kehoe argued that money made through the slave trade was disseminated widely through philanthropic initiatives, improving Highland society more broadly. Iain Mackinnon and Andrew Mackillop have recently argued instead that profits were held in just a few hands, creating lasting inequality. Elites, rich on the back of slavery bought landed estates, subsequently removing many thousands of tenants from the land in the ‘Highland Clearances’ and accelerating the decline of traditional ways of life. This process had long-term negative effects on the region, much of which remains underdeveloped today.

Part memoir, part academic history and part political commentary, David Alston’s Slaves and Highlanders: Silenced Histories of Scotland and the Caribbean is to be welcomed. The author adopts an innovative approach, meshing microhistories of Scots in Guyana (Demerara, Essequibo and Berbice) with stories of enslaved people. Alston argues that the economic effect on Scotland in general, and the Scottish Highlands in particular, was significant. His interpretation of Scots as willing colonisers, and the argument in favour of trickle-down economics and, therefore, the wide dissemination of slavery’s profits, will surely provoke lively discussion.

Perhaps the book’s greatest triumph is its commitment to recovering stories of people enslaved or formerly enslaved in Scotland, touching upon aspects of Scottish-Caribbean connections that have not been explored thus far. While slavery was found to be inconsistent with Scottish law in 1778, many Scots remained present in slavery societies up to 1834, often bringing enslaved people back to Scotland. Many of those enslaved in the Caribbean, though technically free if reaching Scotland after 1778, remained in bondage. Remarkably, Alston traces Scotland’s last servant to be born enslaved: Petronella Hendrick, who died in 1917, perhaps just within living memory. His commitment to microhistories is particularly effective in teasing out the legal status of each individual. Alston also identifies 69 Scottish Guyanese children in Great Britain, tracing some of their stories, from their education to later careers and other challenges.

This book is published at an important juncture in British history, as Scots continue to flirt with potential independence from the United Kingdom, while a reckoning with the legacies of England and Scotland’s conjoined imperial past promises to be a regular feature in political debates over the next decade at least. As authorities increasingly seek to acknowledge the impact of slavery on Scotland’s institutions and wider regions, Slaves and Highlanders will prove essential reading.

Stephen Mullen teaches Scottish history at the University of Glasgow.