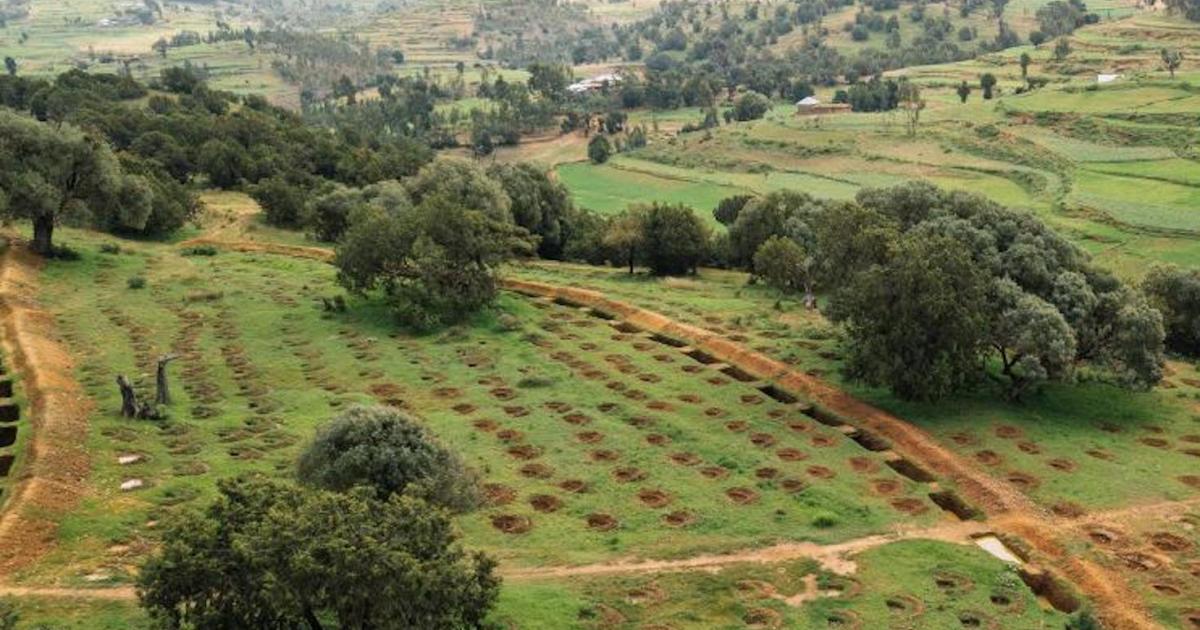 “We can’t see the forest for the trees.” The popular saying calls on us to remember the big picture problems as we identify individual solutions. It turns out that it’s accurate for real forests and trees, too.

For years, researchers have produced accurate techniques to track where people are damaging, protecting and restoring the world’s 2.5 billion acres of primary tropical forests, which are vital tools to store carbon and protect biodiversity.

But current monitoring systems fall short: They simply aren’t detecting trees outside of these closed-canopy forests.

The billions of trees living in “mosaic landscapes” — where people use the land in multiple ways — are also important. In agricultural landscapes, people use them to protect their crops. In cities, they rely on them to clean the air and lower temperatures. And in drylands, they are a vital source of income and timber. In Latin America, for example, restoring trees to a hectare of land can add $1,140 in value.

Fortunately, a solution is here. Preliminary tree cover data developed by WRI shows where billions of these trees — previously invisible to governments, investors and the public — are growing across 3.6 billion acres of Africa and Latin America (an area 40 percent larger than the entire United States). Most importantly, this “trees in mosaic landscapes” data gives credit to the undervalued and underfunded local communities who work to protect and restore these ecosystems.

Why we need more data on trees outside dense forests

Existing global tree cover datasets on platforms such as Global Forest Watch rely on medium-resolution satellite data. That makes them accurate enough, in 30 meter by 30 meter squares, to capture where trees are living and dying in dense forests. However, they are not detailed enough to detect trees growing outside them. This new, less expensive method is nine times more detailed, at a 10 meter by 10 meter resolution, and allows us to see trees that are young or growing far apart.

This information is especially useful for government officials looking to track where young trees and sparse forests are contributing to their land restoration pledges to the global Bonn Challenge, AFR100 and the Great Green Wall in Africa, and Initiative 20×20 in Latin America and the Caribbean.

It’s also important for community-based organizations and local enterprises working to grow trees the right way and their investors and donors. They could all use it to detect trees more accurately in mosaic landscapes and identify which areas could be restored.

4 reasons why monitoring trees outside dense forests is important

While this dataset is still under development, it is already revealing important insights about the billions of trees central to urban and rural life.

Millions of farmers grow trees on and around their land. Agroforestry systems, for example, which grow trees on croplands, underpin the livelihoods of more than 900 million people. Think of shade-grown coffee in the tropics, where canopies of native trees shelter the berry-producing bushes from the harsh sun.

Farmers typically plant trees on their land far apart so that sunlight can still reach their crops. That makes it difficult for less detailed satellite monitoring systems to detect them. This gap is especially important in Central America, where millions of farmers use agroforestry to produce commodity crops such as bananas. Our data, however, reveals that 75 percent of the region’s farms — around 9.8 million acres — have more than 10 percent tree cover. This is a testament to the work of local communities planting and protecting trees.

This analysis is useful for countries, such as Guatemala, with public incentive programs that pay farmers to restore land. When policymakers see where farms have fewer trees, they can target outreach to those communities and encourage farmers to apply for government support.

A more precise understanding of the locations of agroforestry systems can also help government agencies measure how much carbon they store. In Costa Rica, this data could be integrated into national systems that report on progress toward the country’s national emissions reductions goals outlined in the Paris Agreement.

Over in Kenya, it could help the Government of Makueni County and other subnational governments assess how trees on farms contribute to the national goal of increasing tree cover to 10 percent by 2022. Integrating those insights into county spatial plans, which govern public budget allocations, could unlock more funds for agroforestry.

Drylands are a diverse set of landscapes that cover more than 40 percent of the world’s surface and are home to about 2 billion people. They are also full of trees that store carbon and protect soil health.

While local communities know how to manage these trees to provide energy, grow food and keep the soil healthy, most satellite datasets have trouble detecting them in a consistent way. The lack of data also furthers the misperception that drylands are treeless wastelands “degraded” by local communities. In contrast, the land next to communities in the Sahel is often full of trees whose shade protects residents and animals from extreme heat that can reach 120 degrees F.

Innovative past studies, which have found that trees extend across an area of dryland larger than the Amazon forest, use sampling methods that don’t count tree cover for every point in the landscape. This makes it impossible to show precisely where these trees benefit biodiversity and help communities adapt to the effects of climate change, such as extreme (and increasingly commonplace) droughts.

Our method does assess tree cover for every 10 meter pixel. Matching it with data on climate resilience, drought tolerance, water management and food security can help assess the true impact of regreening.

For example, in the Maradi and Zinder regions of Niger, home to a decades-long effort to naturally regenerate trees, this analysis can provide robust proof of progress, giving farmers and herders credit for their hard work. The data could also convince governments to enact public policies and local laws that incentivize smallholder farmers to restore land.

These insights are also important for Latin America. Take the case of western Mexico’s sparse Sierra Madre Occidental pine-oak forests, which once covered 21 percent of the country’s land, but now only span 8 percent. Government agencies struggle to fund free, high-quality data that shows where dry forests are healthy and where restoration could be most beneficial. While our data can’t distinguish between the species of the trees it detects, it could fill that gap in areas where government and civil society programs are restoring native forests.

The method can also help local communities and businesses, such as pine resin company Ejido Verde, show where their native trees are growing. That could convince investors to help regenerative start-ups expand: Indigenous smallholder farmers that grow pine trees and sustainably harvest the sap with Ejido Verde can make $18,000 per year, more than double the average annual income.

3. Urban trees sprout up in cities and communities

Trees are as essential as any other infrastructure to cities and their residents, from lowering street temperatures during heat waves to improving air quality. As more cities join alliances such as Cities4Forests and commit to protecting and restoring parks, street trees and forests lining urban watersheds, they need to track progress accurately.

Past datasets lacked the detail necessary to pick up all the trees in a city, leaving authorities with few alternatives to laboriously counting every tree by hand or organizing data collection mapathons every year.

Our new data can produce precise maps that can help officials monitor progress toward their tree cover goals. It can also point out where adding trees could benefit historically marginalized neighborhoods that most need the extra shade.

Let’s zoom into Addis Ababa, Ethiopia. About 34 percent of this rapidly growing city, in a country with a strong land restoration commitment, has more than 10 percent tree cover. Those hard numbers can help a mayor and their team show that investing in urban trees and forest expansion works, which could unlock further funding from the national government or private donors.

People have cut down one-sixth of the world’s natural forests in the last century alone, leaving thousands of forest fragments scattered in hard-to-reach places. Our data can find these patches of trees growing along rivers, on steep hillsides next to farms, and elsewhere.

Conservation programs could see where connecting natural forest fragments, home to many rare plants and animals, could have the most benefit. And forest rangers could locate the small-scale disturbances in the forest that signal illegal logging.

Governments and companies in Brazil, for example, are realizing the advantages of protecting and restoring riverside trees to improve water quality. In Espirito Santo state, reforesting about 6,200 acres of degraded pastures could save the local water supply agency $26 million over 20 years, a savings of almost three times the cost of investment. The State Environmental Agency could use this data to plot where investing in tree-planting along waterways could have the most economic and biodiversity impact.

The agency could also use it to monitor its REFLORESTAR program (Portuguese), which will pay $8.5 million in 2021 to landowners that regenerate native trees and natural vegetation. This new method can exclude non-tree crops — such as tea, sugar, bananas and cacti crops — that don’t qualify for REFLORESTAR funding, but that current mapping methods mistakenly classify as “trees.” With more accurate data, the government could unlock more funding and help realize the state’s Initiative 20×20 goal of restoring 197,000 square feet of land.

When combined with new insights from WRI’s Land & Carbon Lab, the preliminary trees in mosaic landscapes data could revolutionize land restoration monitoring. Paired with high-quality carbon storage data in the works, it could help track how much carbon young forests and tree-filled farmlands are storing. And matching it with field-collected data could link tree cover with improvements in rural prosperity, such as higher incomes. That could convince investors that financing trees outside closed-canopy forests is an effective nature-based solution to climate change and rural poverty.

Further improvements are on the way. In 2022, we expect the data to detect trees outside and inside forests across Africa, Latin America, South Asia and Southeast Asia’s tropical, subtropical and southern temperate zones. This would more than triple coverage from 1.4 billion ha to nearly 5 billion ha.

By 2023, the data would detect changes in tree cover in each 10 meter by 10 meter pixel between 2017 and 2022. We could even produce accurate maps that show annual change within that five-year span and that automatically identify monoculture tree plantations within pilot countries.

With actionable data, we can prove that the vision of th UN Decade on Ecosystem Restoration (2021-2030) is possible and practical. We expect that this dataset can help usher in a new, more transparent era where all the world’s trees are visible to everyone.