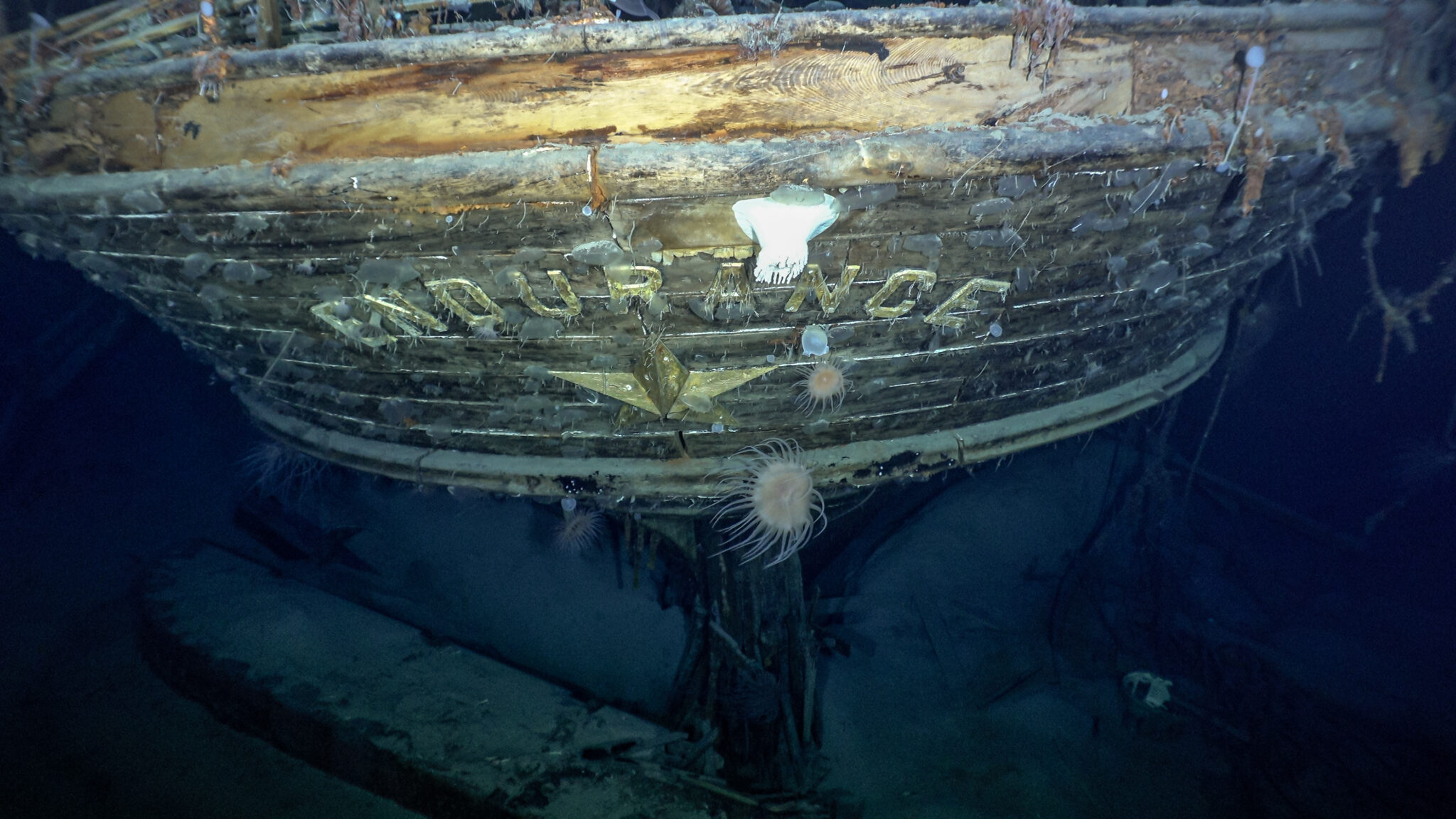 Mensun Bound, Director of Exploration on the expedition, said:

“We are overwhelmed by our good fortune in having located and captured images of Endurance.  This is by far the finest wooden shipwreck I have ever seen. It is upright, well proud of the seabed, intact, and in a brilliant state of preservation.  You can even see ‘Endurance’ arced across the stern, directly below the taffrail.”

Captained by Frank Worsley, Endurance carried 28 souls, including leader Sir Ernest Shackleton on the Imperial Trans-Antarctic expedition in 1914. The goal of the expedition was to achieve the first land crossing of Antarctica from the Weddell Sea to the Ross Sea. Shackleton and the crew of Endurance never even made landfall. The ship was tied down by the sea-ice for 10 months before it was finally crushed by the pressure of the pack ice and sank. The men were forced to abandon ship and camp out on ice floes for months before managing to make it to Elephant Island on Endurance‘s lifeboats. From there Shackleton and five men took a single lifeboat and traveled 800 miles to the island of South Georgia in the southern Atlantic. Shackleton was able to reach a whaling station and organize a rescue party for the 22 crewmen he’d had to leave behind on Elephant Island. In an amazing testament to just how tough these guys were, all 28 members of Shackleton’s crossing party made it home alive.

The Falklands Maritime Heritage Trust organized an expedition to find the Endurance that departed Cape Twon for the Weddell Sea this February. A multi-disciplinary team of educators, explorers, scientists and documentarians equipped with state-of-the-art submersible vehicles, remote operated vehicles and underwater drones were transported to the wreck site on the SA Agulhas II, a South African ice breaking polar research chip.

After two weeks of searching, they found the wreck on Saturday (the 100th anniversary of Shackleton’s funeral) about four miles south of the final position recorded by Captain Worsley. It was 9869 feet below the surface and exceptionally well-preserved in the cold Antarctic waters.

The underwater drones produced stunningly clear images of the 144-foot-long ship. Amazingly, the helm has remained intact after more than a century underwater, with gear piled against the taffrail as if Shackleton’s crew had only recently left it.

The ship’s wooden timbers, while damaged from the crush of ice that sank in, still hold together. Sea anemones, sponges and other small ocean life made homes on the wreckage, but did not appear to have damaged it.

Endurance is a protected as a Historic Site and Monument under the International Antarctic Treaty, so it will not be interfered with at all. No objects will be recovered. No physical contact will be made. The site, wreck and debris field, will be fully documented, photographed, scanned and filmed.