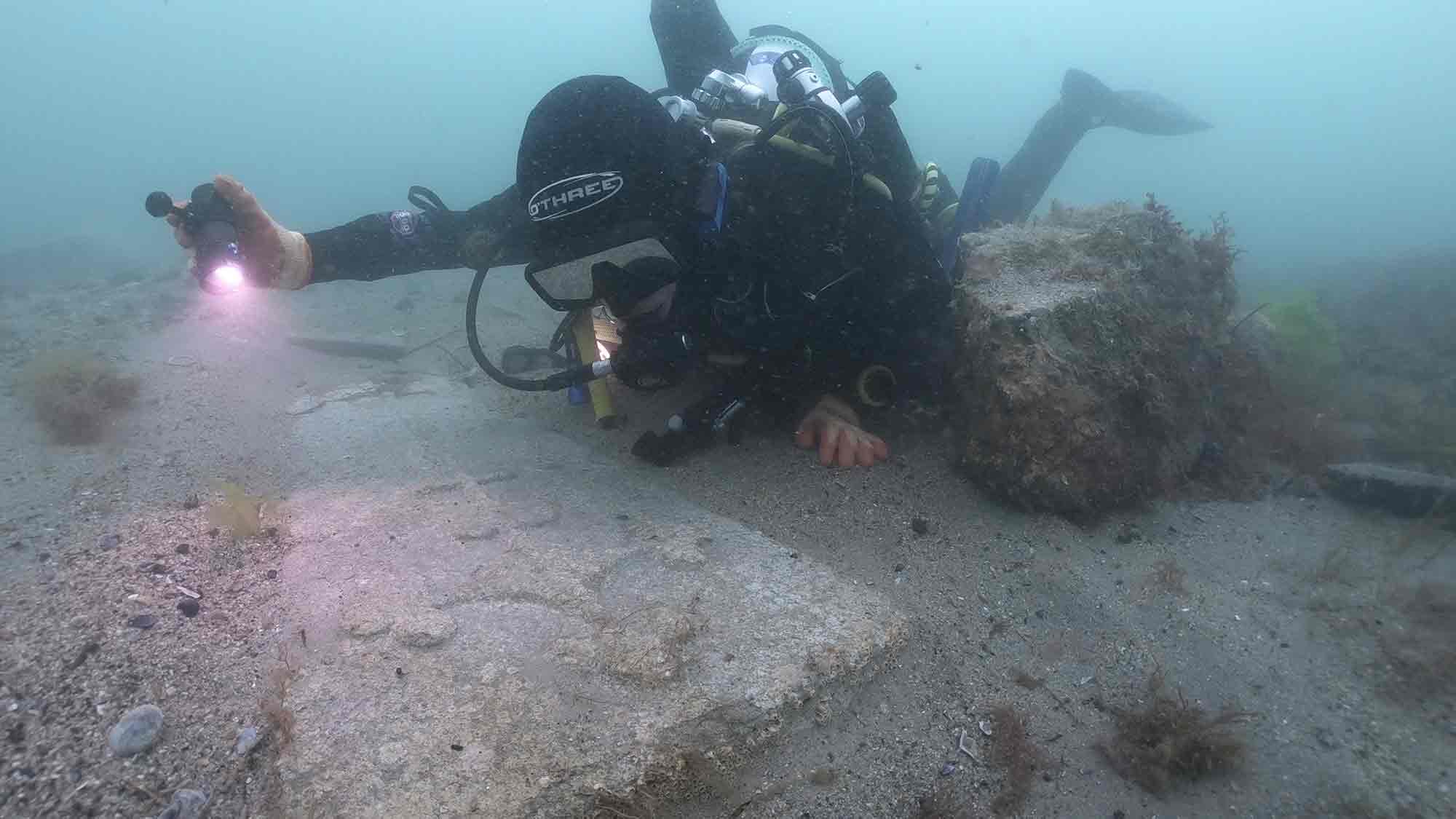 The remains of a medieval ship made from trees felled over 750 years ago is one of three extremely rare shipwrecks that have been granted the highest level of protection by the British government.

The 13th-century Mortar Wreck discovered in Poole Bay in Dorset with its cargo of gothic Purbeck stone gravestones is the oldest known protected wreck in English waters where hull remains can be seen. Tree ring dating of the wreck indicates that the timbers used to construct the hull are from Irish oak trees, felled between 1242-1265, during the reign of King Henry III.

The survival of 13th-century vessels is extremely rare, and prior to this discovery, there are no known wrecks of seagoing ships from the 11th to the 14th century in English waters. The wreck was discovered by Trevor Small who has operated diving charters from Poole in Dorset for the past 30 years.

“I was born into a seafaring family,” says Trevor Small. “I’ve skippered thousands of sea miles looking for shipwrecks from my home port of Poole. In summer 2020, I discovered what I believed to be an undetected wreck site. Recent storms had revealed something unknown on the seabed. I was granted permission to dive the wreck. The rest is history! I’ve found one of the oldest shipwrecks in England.”

The vessel, known as a clinker ship in its design, is made from overlapping planks of wood and was carrying a cargo of Purbeck stone. The shipwreck is referred to as the ‘Mortar Wreck,’ since much of the cargo contained within the wreck also includes several Purbeck stone mortars, which are large stones used by mills to grind grains into flour.

Finds recovered from the Mortar Wreck include two Purbeck stone gravestone slabs from Dorset, with two different gothic designs. They are in immaculate condition and the chisel marks can still be seen. These gravestones are found in church graveyards across the south coast. They are significant because they were pre-carved and are not blank slabs, which suggests demand for highly skilled stonemasons and their products.

The gravestone slabs would have either been carved at the quarries or at a workshop and are unpolished. One of the slabs features a wheel-headed cross, an early 13th-century style, while the other features a splayed arm cross, common in the mid-13th century. Several Purbeck stone mortars used by millers to grind grains into flour have also been recovered.

Other finds include a large cauldron for cooking soup, a smaller cauldron, which would have once had a long handle for heating water and mugs covered in concretion – a hard solid mass that forms over underwater objects over time.

“Very few 750-year-old ships remain for us to be able to see today and so we are extremely lucky to have discovered an example as rare as this and in such good condition,” comments Tom Cousins, a Maritime Archaeologist at Bournemouth University. “A combination of low-oxygenated water, sand and stones has helped preserve one side of the ship, and the hull is clearly visible.”

One theory is that the ship may have been lost on its way out from the Dorset coast. Its destination is unknown. Historic England has been working closely with Bournemouth University and Trevor Small to investigate this wreck. Irish oak was widely exported for shipbuilding during the Medieval period and Purbeck marble gravestone slabs were widely used across the south of England and were exported to Ireland and the continent. This wreck reveals the rich web of maritime trade and contacts in the Channel and Irish Sea in this period.

Historic England advised that the medieval shipwreck be protected along with two other early modern shipwrecks. They are the 16th century Shingles Bank Wreck NW96 and 17th century Shingles Bank Wreck NW68, both discovered off the Needles Channel, Isle of Wight by divers Martin Pritchard and Dave Fox. The survival of pre-1700 ships is extremely rare, as is the unearthing of previously unrecorded wreck sites in the Solent, making these discoveries nationally significant.

“These three shipwrecks from the 13th, 16th and 17th centuries are very important discoveries and deserve the highest level of protection,” says Duncan Wilson, Chief Executive at Historic England. “The 13th-century ship with its cargo of medieval Purbeck stone is fascinating because it is the earliest English protected wreck site where hull remains are present, while the Shingles Bank wrecks’ ordnance and cargo reveal a wealth of information about life and trade many centuries ago.”

With the addition of these three wreck sites, there are now 57 Protected Wreck Sites in English waters. Their status means that divers need a special license administered by Historic England on behalf of the Department for Digital, Culture, Media and Sport to dive the wrecks. Their artefacts are protected and their condition is carefully monitored.

“These fascinating shipwrecks can reveal so much to us about our national history and it is right that we protect them for future generations,” says Nigel Huddleston, United Kingdom’s Heritage Minister. “The survival of the 13th-century Mortar Wreck is particularly rare, with timbers dating to Henry III’s reign, and the 16th and 17th-century Shingle Bank Wrecks shed light on historical trading.”

Rebecca Rossiter, Engagement and Collections Manager at Poole Museum, who will be exhibiting the cargo finds from the Mortar Wreck added, “It’s exciting that finds from the Mortar Wreck will be going on display in one of Poole Museum’s three new maritime galleries. Our new maritime galleries are part of Our Museum Project £4.3m redevelopment of the museum, supported by The National Lottery Heritage fund. They will open to the public in 2024, and local residents and visitors will be able to see some of these incredible finds up close and hear the stories about how the wreck was discovered and excavated from the people involved.”

Click here for more details about the Mortar Wreck