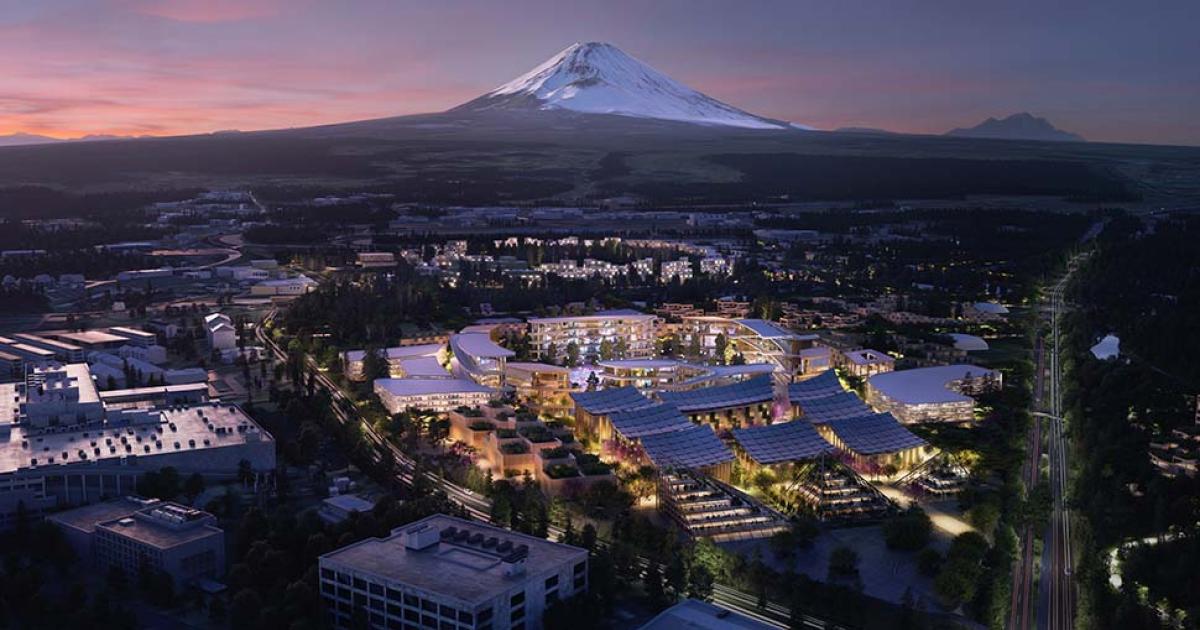 In February, the Toyota Motor Company broke ground on what it calls Woven City, a built-from-scratch futuristic urban center on 175 acres in the shadow of Mount Fuji. Woven City is a reference to the way the project plans to weave together cars, robots, data and computers to create a city that the builders say is highly efficient, pollution free and sustainable.

The new city will be carbon neutral, Toyota says. Autonomous cars will run on non-polluting green hydrogen, while solar and wind provide other energy needs. And sensors embedded throughout Woven City will gather a range of metrics and process them with artificial intelligence to help the city constantly become cleaner and run more smoothly.

Woven City is one of a burgeoning number of “smart cities” that have been recently built or are being planned or constructed. NEOM is a $500 billion sprawling futuristic city for a million people under construction in Saudi Arabia. Egypt is building a new smart capital near Cairo that planners say could eventually be home to 6.5 million people. Telosa, proposed by a former Walmart executive, would be a city of 50,000 in the western United States “in a place yet to be determined.” Numerous smart cities have been or are being built in China.

There’s no single concept of a smart city. But the basic definition is a city filled with sensors that monitor myriad aspects of life, from traffic to pollution to energy and water use. In the case of the Woven City, “smart homes” will feature sensors that will monitor the occupants’ health. All the monitors in these cities are connected to the backbone of these prototype communities, the Internet of Things (IoT), meaning the interconnection of tiny computers placed in everyday objects. The massive trove of collected data will be interpreted with artificial intelligence to make cities greener and more livable.

While proponents say these communities represent the future of a healthier planet, some prominent smart cities have faced serious obstacles to realizing their utopian visions. Masdar City in Abu Dhabi abandoned its smart city master plan because of financial problems that began in 2008 and continued because the cost of some aspects of the city was far more than forecast. Songdo is a completed smart city with a population of 170,000 in South Korea that has not been able to fill its buildings. It’s sometimes described as a ghost town, or, variously, as cold, impersonal, homogenous and dully predictable.

While proponents say these communities represent the future of a healthier planet, some prominent smart cities have faced serious obstacles to realizing their utopian visions.

One recent paper on smart cites grappled with ways these cities can introduce serendipity into daily life to combat their monotonous nature.

“There are a lot of good things that can come of” smart city concepts, “especially for the environmental applications,” said Shannon Mattern, a professor of anthropology at The New School for Social Research and author of “A City is Not a Computer.” “But it really limits your [ways] of intervention to the types of things that lend themselves to quantitative measurement,” she said. “When you take messy ambiguous dimensions of human nature and try to find ways to algorithmicize them, there is always a failure there, something that slips through the cracks.” History, culture, and the spiritual aspects of life are among those aspects that critics cite as missing from — or are diminished — in smart cities.

There has been criticism, as well, of smart cities being alien to the landscape on which they are built. In her book “Spaceship in the Desert,” about Masdar City, Gökçe Günel, an anthropologist at Rice University, said both Masdar City and Neom “share the vision that the desert is an empty zone on which any kind of ideal can be projected,” she said. “That’s why I compared Masdar City to a spaceship insulated from the rest of the world.”

Despite that trillions of dollars are being spent to create these spectacular, Oz-like, all-encompassing cities of the future, some leading analysts believe in a very different concept of smarter cities.

“I hate almost every effort at building a greenfield smart city,” said Boyd Cohen, a professor at EADA, a business school in Barcelona, who is one of the pioneers of the smart city concept and a longtime climate strategist. “A smart city without people is a dumb city. You are building a smart city in the absence of people, in the absence of history, in the absence of culture. The developers say, ‘We are going to build this great, amazing city and people will come,’ and they don’t. People want to live in communities and have culture around them.”

An alternative to a spanking new city rising on virgin land is to incorporate smart technologies into existing cities, Cohen said. Singapore, London and Barcelona are among the cities that lead the world in adopting smart technologies to more efficiently operate their infrastructure and become greener. In London, for example, sensors on light poles monitor air pollution and show particularly polluted spots that can be avoided. Because collecting trash is the most expensive part of the waste disposal process, Barcelona adopted “smart bins” that signal when they are full and ready for pick up. But technology is not always a be-all and end-all.

Cohen believes cities are on the front line of climate change and need to become smarter to survive it. “In 2009 [at the U.N. climate conference in Copenhagen] everyone thought Obama and the United Nations were going to save the world” with agreements to restrict CO2 emissions, he said. “It didn’t happen and still isn’t happening. So I turned my attention to cities. That’s the place where we will get faster action on climate change.”

Urban planning, says Cohen, may be the single most important way to reduce fossil fuel pollution and consumption. Effective urban design — density, walkability, mixed use so people don’t have to drive long distances, and efficient, clean electric or hydrogen public transportation — is the foundation. “Then you layer in tech,” he said. “Technology around renewable and distributed energy. And to make our buildings more energy efficient. If you tackle energy consumption and transportation and urban planning, you have gone a long way toward solving the climate problem.”

Smart grids are a key component of smart cities. These power grids optimize the delivery of electricity by receiving information from users over the IoT. This data provides experts with information about how, where and when energy is used. In some models, it interprets that data with artificial intelligence. But as energy sources are diversified — solar and wind from large and small sources, even individual homes, as well as traditional sources — it makes it harder for electrical systems to efficiently sense where power is needed and to allocate it. Because it can better manage available power, a smart grid avoids waste and can make the most of renewables.

Urban planning may be the single most important way to reduce fossil fuel pollution and consumption.

A host of other smart applications are being used in cities. Parking is the bane of urban dwellers, so smart parking has gotten a lot of attention. Santander, Spain, for example, is considered one of the world’s smartest cities because it has 20,000 parking sensors connected to the IoT. Sensors under parking spaces can tell when they are empty and send that information to antennas that beam it to a control center. Signs guide drivers to the empty spots, limiting time spent driving around looking for a space and reducing fuel use, carbon dioxide and automobile pollution, and traffic congestion.

In Utrecht in the Netherlands, people ride “sniffer bikes” that measure three types of particulate air pollution, as well as recording their location, speed, battery voltage, temperature and humidity, road conditions and organic gases, which are sent to a central data hub. People can choose the cleanest route and are themselves de facto sensors, providing information to city managers.

Water use is another prime target of smart applications. A smartphone app, for example, can alert residents to an undetected leak in their plumbing and allows them to monitor consumption and quality.

Barcelona has pioneered a smart water irrigation system in its public spaces. Officials inventoried the species of plants in each park and determined precisely how much water they need. Water and humidity sensors, coupled with data from weather stations and rain gauges, provide information on how moist the soil and air are, and allow delivery of the right amount of water. The city says it saves 25 percent on its water bill — more than $455,000 a year.

But smart cities have run into trouble over the issue of who owns the data that is collected and how it will be used. A Google affiliate called Sidewalk Labs had plans for a 12-acre smart city development, Quayside, on Toronto’s lakefront. The project ran into a buzz saw of opposition, largely over whether it could be trusted to manage the data. Roger McNamee, a venture capitalist, wrote a letter to the city council and said the information technology behemoth could not be trusted. “The smart city project on the Toronto waterfront is the most highly evolved version to date … of surveillance capitalism,” he wrote. The company will use “algorithms to nudge human behavior” in the direction “that favors its business.”

Sidewalk Labs CEO Daniel L. Doctoroff said the 2020 cancellation of the project was largely a result of the pandemic and economic uncertainty in the Toronto real estate market. “It has become too difficult to make the 12-acre project financially viable without sacrificing core parts of the plan,” Doctoroff wrote last year.

It’s clear that the vision of what works as a smart city is still in the early stages, especially as technology and concepts continue to evolve. “It will take time to scale up the most sustainable models across a city, let alone the world,” said Cohen.