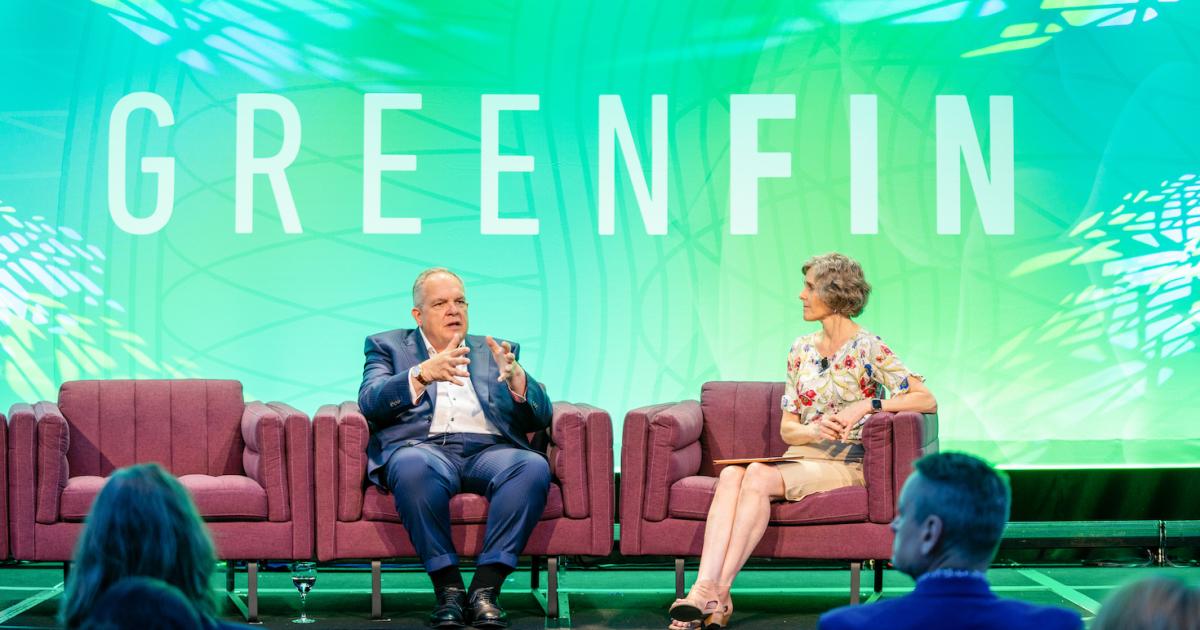 With about $4 trillion in assets under management, Boston-based State Street is among the world’s three largest financial services providers to institutional investors — and the second-oldest continually operating bank in the United States.

Like many leading asset managers, State Street has embraced a public commitment to invest its portfolio in financial instruments — from index funds to bonds and beyond — that it believes are helping the economy progress toward net zero by 2040. Even though it is often a passive investor, the company takes an active approach to deliver on that pledge. One illustration of that is a promise made public in May to ensure (among other things) that 90 percent of financed emissions in the State Street portfolio are “net zero, aligned with a net-zero pathway, or the subject of direct or collective engagement and stewardship actions” by 2030.

The company’s strategy toward that end is informed by its participation in high-profile industry coalitions aimed at accelerating a just transition to a net-zero economy, including the Net Zero Asset Managers Initiative and the Glasgow Financial Alliance for Net Zero. What’s more, State Street Chairman and CEO Ron O’Hanley leads the Sustainable Markets Initiative’s Asset Manager and Asset Owner Task Force, aimed at identifying ways for institutional investors to scale the reallocation of capital toward sustainable investments, including climate mitigation and adaptation projects. He also participates on the Council for Inclusive Capitalism, focused on ensuring that the transition to a clean economy is just and equitable.

The point of this windup: State Street and its CEO aren’t sitting on the sidelines.

During a keynote conversation at GreenFin 22 in late June, O’Hanley said he believes one of State Street’s most important roles as an asset manager is to ensure companies are being overseen by “independent, strong, effective” boards. For the past 10 to 15 years, State Street has taken an active role toward investment stewardship, and that commitment has deepened in more recent years to support its environmental, social and governance (ESG) strategy, he said.

When asked for an example of how this practice is yielding progress, O’Hanley pointed to an unnamed oil “major” that faced a shareholder proposal last year related to disclosing its emissions of methane — a potent super-polluting greenhouse gas that often leaks from oil and natural gas production systems and pipelines. After discussions with State Street and other investors, the company’s management supported the proposal moving forward. “To me, that is evidence that the stewardship is working, because ultimately, it doesn’t help to be confrontational all the time,” O’Hanley said during GreenFin 22. “You need to do it sometimes, but ultimately management needs to manage companies, boards need to oversee companies, and we need to be there to move along in a way that is useful to the shareholders.”

For that reason, O’Hanley is skeptical that divestment will be the right course of action as financial services firms guide their portfolios toward net zero, especially if a company is taken private in the process. “If you sold [the asset], there was a buyer,” he said. “Most important, now, you have no say. You have no ability to influence as an owner what is going on in this company.”

Instead, O’Hanley suggested that the financial sector use its capital more actively to help high-emissions sectors invest in technologies and solutions that support the transition.

“Ultimately, the decarbonization is going to have to take place in and amongst the high-carbon emitters,” he said. “So, divestment doesn’t accomplish anything. In fact, investment may be what’s required. It may be, in fact it’s highly likely, that many of these companies are going to need more capital to actually get to the decarbonized state that we all desire. … The path from brown to green 1) is going to take some time and 2) is going to need to pass through light brown before it gets to green because it’s not going to happen overnight.”

Reflecting on his work on the Sustainable Markets Initiative, orchestrated by the Prince of Wales, O’Hanley pointed to the role of public-private partnerships in supporting investments in sustainable infrastructure — particularly in emerging markets, which could benefit from renewable energy infrastructure rather than coal-fired power plants. For example, multilateral development banks can step in to assume currency or political capital risks that money managers and pension funds are unable to carry, he said. “If you can take that risk out of the equation, it opens things up to more capital.”

Investments in emerging markets are essential for supporting a just transition, and they should receive more attention, O’Hanley said. “If you think about decarbonization, and if you think about the path to net zero, I would argue that this is the first truly global problem that the world has faced,” he said. “There is no comparative advantage of the U.S. doing it faster, for example, and India not.” For this reason, State Street actively engages companies in its portfolio to understand whether actions they are taking in the geographies in which they do business support the principles of a net-zero transition.

Asked for his perspective on how macroeconomic conditions might affect the transition, O’Hanley reflected that high inflation and the Ukraine war are reminders that the route to net zero will be a multiyear, multidecade journey that will include many potential roadblocks and detours.

“You can have the best plans in the world — and we need to do more planning, we need to as a society be bringing together decarbonization plans with energy policy; we talk about these as if they are separate things,” O’Hanley observed. “But it’s also a reminder that stuff will happen over time. And that the answer is not to say, ‘Well we can’t do this anymore.’ [The answer is] ‘All right, well given this and given the need to be just and how are we going to figure energy costs for those for whom this is a major portion of their income, we need to figure that out, but we can’t take our eyes off the long-term prize.’”