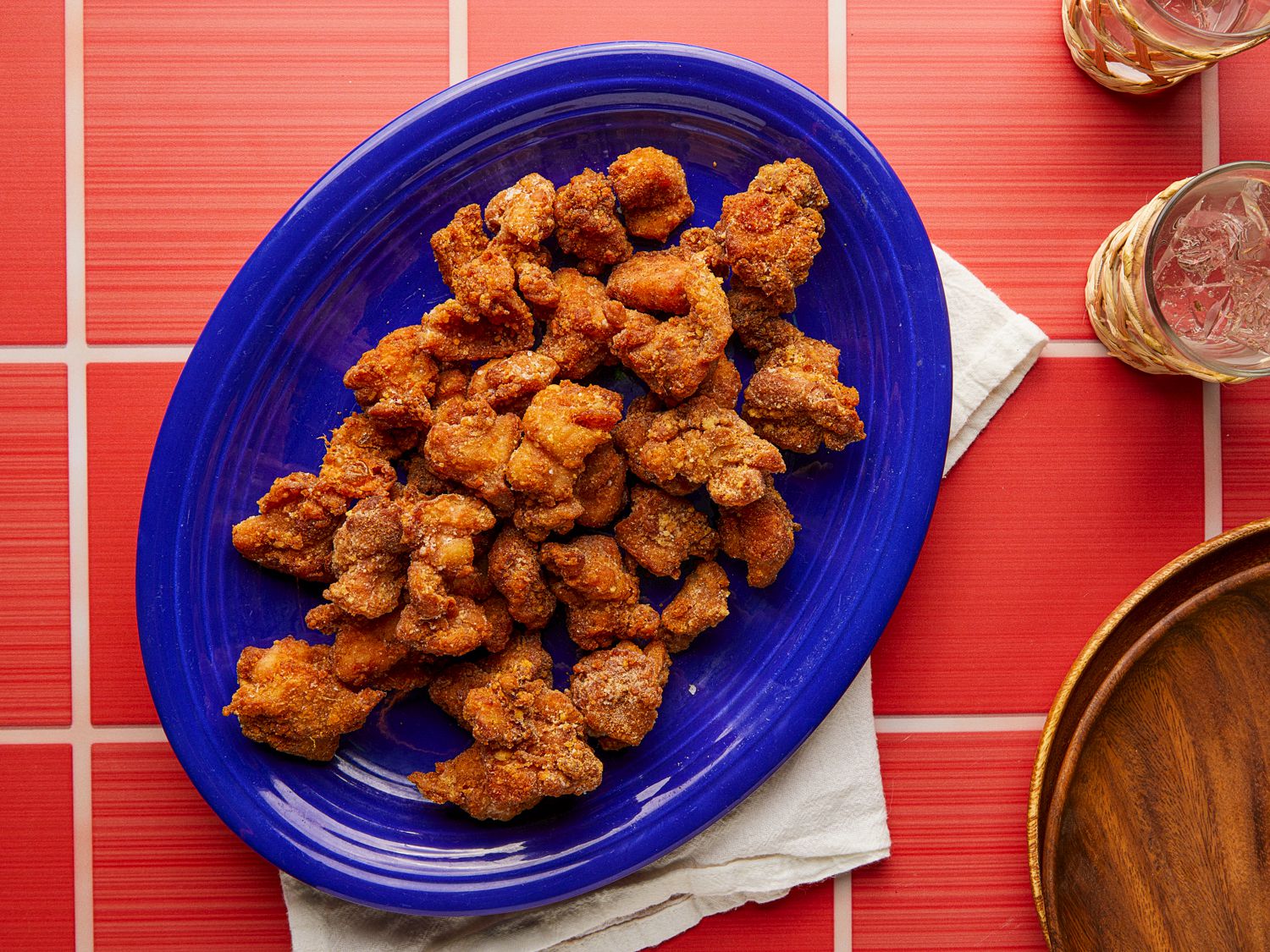 Taiwanese-style popcorn chicken is a delightful evening snack, usually sold in a paper bag and meant to be nibbled on as you saunter through the night markets of Taiwan. The bite-size chunks of thigh meat are juicy and tender, seasoned with a hit of soy sauce, white pepper, five-spice powder, and then deep-fried to order.

The Taiwanese inclination towards deep-fried chicken came in the late 70s and 80s and coincided with the island’s adoration for American cuisine. In the previous decades, America had provided Taiwan with roughly a billion of dollars of economic aid and so there was a particular romanticism surrounding the benefactor’s food and culture.

Out of this fondness arose a tidal wave of American-style concepts: Concession stands popped up around the island serving hamburgers for breakfast, and cheap aspirational steakhouses set up shop at night markets, slinging out stringy cuts of beef drenched in black pepper sauce with spaghetti on the side. Popcorn chicken was introduced to the masses as an approximation of American fried chicken, but flavored with familiar Taiwanese spices instead and occasionally tossed with glassy sheets of deep-fried emerald green Thai basil for extra flavor.

This particular twist on popcorn chicken is flavored with furu (fermented bean curd) and can be found at a lot of "rechao" restaurants in Taiwan—late night beer eateries with short stools and tables, where people gather after a long day of work with a cold, icy lager and hearty plates of food that come in quick succession. While this variation is not as well-known as its night market counterpart, which is made without furu, it is still a very popular option.

I first stumbled across furu-marinated fried chicken at a rechao across from my apartment in Taipei, where the server recommended it as a house specialty. While I’ve had countless renditions of popcorn chicken in my life, this one was a revelation, the flavor of the furu creeping in as an aftertaste and giving each bite a sweet, complex finish. On its own, furu is quite funky, like anchovies or fish sauce, which is why it is almost always used in small quantities and combined with other ingredients as part of a marinade—its flavor is delicious but potent, and thus requires a balanced approach. In this recipe, I add a conservative dollop of furu to the chicken marinade, giving the fried morsels a creamy, underlying hit of umami.

In the United States, furu chicken has largely been unknown, though that is starting to change. At the Brooklyn Taiwanese restaurant called Wen Wen, for example, it is the marquee dish. “I use furu as a salt source,” says Eric Sze, chef and owner of both Wen Wen and the Manhattan restaurant 886. On his menu at Wen Wen is a dish he cheekily calls “Whole BDSM Fried Chicken,” which is his take on the rechao-style furu chicken. Sze serves a whole, deboned bird slathered in a lovely concoction of furu and soy milk and then deep-fries it for good measure. “Furu is sort of like a substitute for soy sauce but it adds a completely different flavor,” he says. “It adds a bit of texture as well because it’s thick. There’s just so much complexity to it.”

A pantry item found in Taiwan, Japan, and all throughout China, furu is made out of fermented cubes of tofu immersed in salty brine. It has a similar texture to that of a ripe creamy brie. It’s sweet and salty; think of it like a very concentrated cube of miso or a spoonful of marmite where a little bit of it goes a very long way. Cottage-industry furu in Taiwan is often sold with chunks of pineapple in the brine, which adds a soft touch of acidity. In southwest China, it is usually seasoned with a healthy sprinkle of hot chile powder. The most common rendition found in Asian grocery stores in the States is furu with red yeast, which adds a lovely stroke of color and sweetness to the bean curd and works perfectly in this recipe.

While furu is still a relatively obscure ingredient in the broad canon of Asian pantry items, it’s a shelf-stable item that can easily be found in the pickle section at most Chinese or Taiwanese grocery stores around the world and of course online.

In a medium bowl, combine chicken, fermented bean curd, soy sauce, Shaoxing wine, garlic, sugar, white pepper, and five-spice powder, stirring well to massage the marinade into the chicken. Cover and refrigerate for at least 2 hours and up to overnight.

In a small bowl, thoroughly stir together all-purpose flour and baking powder, then add it to the marinated chicken, stirring well until chicken is evenly coated.

In a wok or Dutch oven, heat oil over high heat until it reaches 375°F (190°C). Using a spider-skimmer, carefully lower half of the chicken into the oil. The oil temperature should drop when you add the chicken; adjust the heat to maintain a frying temperature of 350°F (175°C). Deep-fry, stirring often, until the chicken is a light golden brown, about 3 minutes. Transfer the chicken to paper towels to drain and repeat with remaining chicken.

Return oil to 375°F (190°C), then add half of the fried chicken back to oil and fry a second time, maintaining a temperature of 350°F (175°C), until chicken turns golden brown, about 2 minutes. Transfer chicken to fresh paper towels to drain and repeat with remaining chicken.

For the Seasoning: Transfer fried chicken while still hot to a large bowl and add the chile powder, white pepper, and salt. Cover the bowl with a large plate or lightweight cutting board and shake it thoroughly so the chicken is coated completely with the seasoning. Season with more salt, if desired. Serve right away.

Thick sweet potato starch is coarser than the finely ground kind, helping to create the right kind of crunchy coating on this chicken; look for brands that specify between thick and thin sweet potato starch on the label to make sure you have the right type. If you can only find thin, just lightly spritz the starch with some water so that it clumps up and creates small beads.