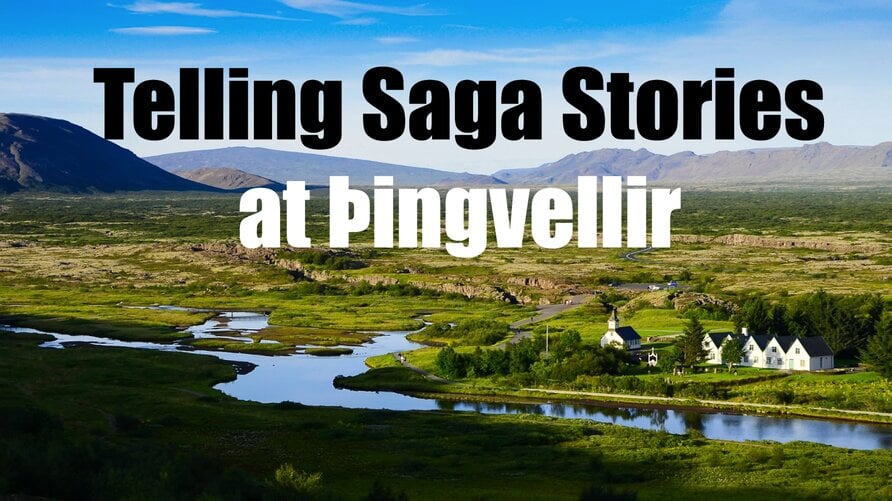 To say that much has been said about The Saga of Njáll the Burner would be an understatement. Talking about it is an exercise in meditation and humbleness, and one must always acknowledge that their own thoughts have most likely been said by a German scholar in the 19th century, or by a podcaster last year. Still, because it is such a vast text with so many layers and angles from which to approach it, it becomes almost a sandbox from which every research topic in saga scholarship can be approached.

This reminds me of a story. A few days ago I was working as a tour guide in Iceland’s Golden Circle and telling the tourists the story of Þingvellir. While my job requires me to joke about what to do when you get lost in an Icelandic forest, talk about the tectonic plates and advertise the delicious arctic char of Þingvallavatn, my heart sings as we arrive at Hakið and descend the bridge down to Almannagjá.

A friendly Portuguese tourist asked me jokingly why the heck we are there rather than spending more time at the erupting Geysir or drinking hot cocoa at Gullfoss. I had to quickly find a hook, something that will catch his attention, and prove to this stranger that these hallowed grounds are really worth his time. My mind frantically searched, and there he was: Mörðr Valgarðsson.

Following the burning of burner Njáll and in the very space where I and the Portuguese tourist were standing, a lawsuit began that would end with the greatest bloodshed that Þingvellir would ever know. Mörðr, whose machinations were partially to blame for the burning, stood before the assembled court and began prosecuting his case against Flosi the Burner. Since our time in Þingvellir was limited and I wanted to get my point across to him as efficiently as possible, I somewhat shortened Mörðr‘s words. In order to give you the most truthful account of my conversation with the Portuguese tourist, I keep the quote, as translated by Robert Cook:

Then he spoke these words: “I named Þóroddr as witness, and Þorbjörn as second witness, to testify that I gave notice of an unlawful assault by Flosi Þórðarson at the place where Flosi Þórðarson wounded Helgi Njálsson with an internal or brain or marrow wound which proved to be a fatal wound, and Helgi died of it. I declared that he deserved life outlawry for this offence, not to be fed, nor helped on his way, nor given any kind of assistance. I declared all his property forfeit, half to me and half to the men in the quarter who have the legal right to his forfeited property.”

Mörðr spoke: “I named Þóroddr as witness, and Þorbjörn as second witness, to testify that I gave notice of a suit against Flosi Þórðarson for having wounded Helgi Njálsson with an internal or brain or marrow wound which proved to be a fatal wound, and Helgi died of it, at the place where Flosi Þórðarson had previously run at Helgi Njálsson in an unlawful assault. I declared that he deserved life outlawry for this offence, not to be fed, nor helped on his way, nor given any kind of assistance. I declared all his property forfeit, half to me and half to the men in the quarter who have the legal right to his forfeited property.”

Then the witnesses to Mörðr’s notice went before the court and spoke these words, with one of them reciting their testimony and both of them expressing assent, that “Mörðr named Þóroddr as witness, and me as a second witness; my name is Þorbjörn … Mörðr named us as witnesses that he gave notice of an unlawful assault by Flosi Þórðarson at the place where Flosi Þórðarson ran at Helgi Njálsson in an unlawful assault, when Flosi Þórðarson wounded Helgi Njálsson with an internal or brain or marrow wound which proved to be a fatal wound, and Helgi died of it. He declared that Flosi deserved life outlawry for this offence, not to be fed, nor helped on his way, nor given any kind of assistance. He declared all his property forfeit, half to himself and half to the men in the quarter who have the legal right to his forfeited property.”

The Portuguese tourist stared at me confused. “Why would you do this to me?” He asked. I wore my psychotherapist hat, borrowed from my mom. “How did me reading this out to you make you feel?” I asked. “At the beginning it felt like a boring legal proceeding,” he admitted. “But by the third time, hearing again and again what happened to poor Helga Nielsen” – he mispronounced Helgi Njálsson’s name – “it was visualized inside my head. It was as if I myself was experiencing the trauma of what happened to Helga. And the more I heard this alongside the potential outlawry punishment for Flosi, the more I was convinced that this is the proper punishment for this wicked man.”

“You might say,” I offered, “that the changing of generic styles in this critical moment of the narrative makes the audience relive the experience in repetition and enhances the traumatic implications of the burning under the guise of a legal proceeding?” “Hey, dude, I’m just a guy on vacation,” he said.

Still, I could see in his eyes that he was not convinced about the importance of Þingvellir, and I wanted to drill this further into his head. I dragged him back to the observation deck in Hakið and pointed out the former camping grounds of the VIKINGS, now covered in water.

“I have a PhD.” I told him. “I know, you mentioned it like five times already.” He replied. “Well,” I said, “My PhD thesis was about the saga of the family of the lovely Þorgeirr Ljósvetningagoði, whose betrayal of Chris Hemsworth and Tom Hiddleston meant the adoption of Christianity in Iceland (This joke only works if you know that they play Thor and Loki in the Marvel movies).

One of Þorgeirr’s sons was called Þorkell hákr, often translated as Þorkell Bully. Like everybody else in the saga universe, he too appears in Njáls saga. This is when Skarphéðinn, the son of Njáll, is going around the booths trying to recruit chieftains to his legal cause by insulting them. A scene about which Tom Morcom wrote most recently an exquisite article in Viking and Medieval Scandinavia.” “Who is Tom Morcom?” The Portuguese tourist asked. “A great scholar,” I said. “Anyway, just before Skarphéðinn coming to Þorkell hákr’s booth, this unruly son of Þorgeirr is introduced into the saga. We get a detailed account of his genealogy even though his father and mother’s genealogies were fully introduced a few chapters before. Then the narrative tells us of Þorkell’s voyages.

“Later on,” I told the Portuguese tourist, “when the very earthly Skarphéðinn Njálsson meets with the monster-slayer Þorkell, he waves an axe at him and scares him off with little effort. William Ian Miller presents Þorkell as belonging to a different genre than the Icelandic sagas, but I think that this is a misunderstanding of the generic workings of the Icelandic sagas in events that transpire away from Iceland. A battle against a dragon in continental Europe could just as easily be at home in Grettis saga, Vatnsdæla saga or Færeyinga saga.

“Listen,” the Portuguese tourist interjected, “I just want to get to Parking Lot 2 and sit on the bus, it‘s quite windy up here.” “Sorry for the tangent,” I said, “but my main point here was to show you that in this case, the change of chronotope – the different narrative pace and spatial location outside of Iceland – of Þorkell‘s adventures contrasts with Skarphéðinn, and serves to elevate him through this very contradiction. Skarphéðinn‘s character is in fact enhanced through this embedded narrative about somebody else.

“Very soon I‘ll need to find a bed,” said the Portuguese tourist with a yawn. “Could we get back to the bus?” “Sure,” I said, “let me just explain to you how to get to P2. First, you walk past the Law Rock. You will probably want to walk around the observation deck there, and will most likely enhance your knowledge by reading the information plate there. Then you walk more and get back to the main path and pass the Drowning Pool, quite a grim place to be honest. It really shows you that the religious tolerance represented by Þorgeirr Ljósvetningagoði was short-lived. You will then cross a bridge, and after two minutes, will find a toilet to your left. To your right will be a sign saying “P2,” which admittedly is often covered in snow.” At this, I gave out a chuckle, but the Portuguese tourist just stared at me for a few moments, and started walking.

“You know,” I stopped him on his tracks. “Telling you these instructions reminded me of when Njáll the Burner gives Gunnar instructions on how to trick someone into paying back his ex-wife‘s dowry. This scene at the beginning of the saga is often ridiculed by scholars as being repetitive; first having Njáll tell Gunnar what to do, and then the whole scene playing out fully in its telling. But upon closer reading, one notices that although Njáll gives very detailed instructions to Gunnar, when the saga lets the sequence play out, it does so very briefly. We have seen earlier that the saga is not above repetition. The power of having the embedded narrative play out the scene and then the narrative itself just glance over it serves to stress the potency of Njáll‘s understanding of human nature. The narrative doesn‘t need to show how his words played out; because of course they did.”

The Portuguese tourist stared at me perplexed. “I didn‘t pay for this!” he said, somewhat annoyed. “No!” I said with a triumphant smile. “You got this for free!“ I noticed him surfing to TripAdvisor on his mobile device.

We then got on the bus and continued in our way. When I arrived home I went on TripAdvisor and read the review in Portuguese. “nada bom.”

I am not sure if my conversation with the Portuguese tourist taught you anything new about Njáls saga. But hopefully, it gave you another way of thinking about it.

This text was presented as a paper in the Embedded Narratives in the Literatures of the Medieval North hybrid conference in Katowice, Poland, 8th-9th of April 2022. The conference was organized by The Centre for Nordic and Old English Studies at the University of Silesia with the Institute of German Studies in Jagiellonian University, Krakow.

Dr. Yoav Tirosh will soon begin a postdoc on disability in the sagas of Icelanders at the Centre for Disability Studies at the University of Iceland. He is also an external member of CVM (Center for Vikingetid og Middelalder) at Aarhus University. He creates the Viking Comics by Yoav webcomic about life in Iceland and Vikings. You can learn more about his comics on Instagram, Facebook, or Twitter @RealMundiRiki.