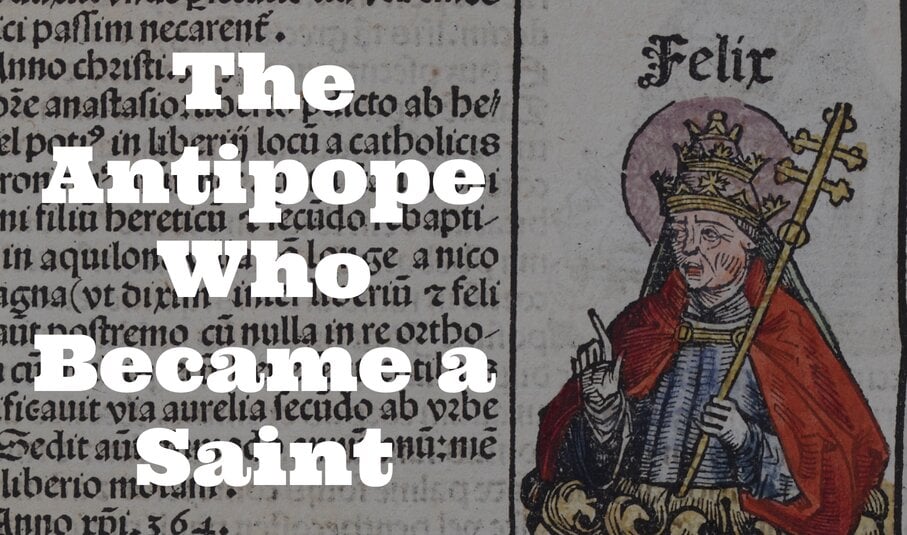 In today’s world, people are pretty much accustomed to the concepts of “fake news” and “propaganda” (albeit, we might say, without always being fully aware of their implications). However, we have plenty of this also in late-antique and medieval times. Instead of spreading through the Web, however, in those days ‘alternative truths’ were disseminated through manuscript books.

The difficulty to discern what is real and what is fictive remains the same; or rather, back in time, it was even bigger because of this mode of transmission. Apart from the fact that most people were not capable of reading, opportunities to check different sources as a means of verification were much rarer, if they existed at all. And even if independent verification did exist, there were still problems: how to become aware of its existence? And how to get ahold on them?

The history of Pope Felix II – or, better said, of who Felix was believed to be throughout the Middle Ages – is exemplary in this respect. But to get acquainted with it, we need to start from the beginning, and to delve into the obscure origins of the Papacy, when the bishop of Rome was nothing more than a primus inter pares (first among peers), and when – as has often happened – the yearning for eternal life was polluted by the greed for more earthly accomplishments.

Turmoil in the early days of the Papacy

This story takes off on 12 April of the year AD 352, somewhere in Rome (at the time, traditional sees of the Popes such as the Lateran or the Vatican palaces were yet to be erected). Pope Julius I had passed away, and after some 40 days of vacancy, the clergy of Rome elected a certain Liberius.

Nothing is known of this man before this moment: but, once consecrated, he firmly took the side of Nicean orthodoxy (i.e., sticking to the right doctrine) against Arian heresy. In what was probably the most impactful doctrinal dispute of early Christianity, in the middle of the 4th century the bishops were divided into two parties of relatively equal strength: the orthodox, believing Christ to be wholly God and man at the same time, and the Arians, who deemed him only a man, albeit an exceptional one. This was of course a pivotal debate, also because the Scriptures do not provide an incontrovertible statement on the point; it must not be forgotten that doctrine, at the time, was still in the making, and theologians of the outmost influence such as Augustine of Hippo, Ambrose of Milan, and others, were yet to appear on the stage. It goes without saying that the “orthodox” (Catholics) and the “heretics” (Arians) proved such only afterwards, when the dispute had been settled in favor of the former.

Emperor Constantius II (317-361) proved a thorny problem for Liberius: he was an Arian who attempted to foster political unity by enforcing Arian resolutions on the whole territory of the empire. In 356, Constantius had Liberius “escorted” from Rome to his capital (Milan), threatened and, at his refusal to yield to Arian resolutions, exiled to Thrace. Under the claim that Rome was in need of a shepherd, the Roman clergy elected the archdeacon Felix (to become Pope Felix II). However, the people of Rome, attached to the former bishop, rebelled against what was in all respects a non-legitimate election, for the reigning bishop was still alive. For the sake of unity among Christians, Felix opted not to fight Arianism; moreover, he turned out to be favored by Constantius, and is in fact suspected by historians to have inclined towards moderate Arianism himself.

In 357, a synod promoted by the moderate Arian party, and endorsed by Constantius, put forward some doctrinal formulas whose Arian content had been softened. Heartily fed up with exile, Liberius spied a way out, and signed them in order to be freed. He was sent back to Rome, accompanied by an imperial decree stating that Liberius and Felix should rule together in harmony. On 2 August 358, elated by his return to the city, the crowd favoring Liberius started an uproar, and the turbulence soon turned into an open riot: Felix was forced to leave the palace, and to seek shelter in a modest dwelling in the countryside, where he allegedly remained until his death in 365.

Once he regained his power, Liberius opted for a benevolent attitude towards Felix’ partisans and Arians, with the purpose to preserve the unity of the Christians. However, this did not play to his favor: such a decision, in fact, turned the strictest orthodox magnates, as well as many of his own supporters, away from him. When Liberius died in 366, two factions were again facing each other, and each of them elected its own pope: Liberius’ remaining supporters nominated their own candidate (named Ursinus) in succession of Liberius; all the others chose Damasus in succession of… Felix, as if they had never accepted Liberius as a legitimate pope. After some new scuffles, Damasus’ party eventually emerged victorious: from that moment on, a different narrative could be molded.

The construction of an alternative memory

So far, the story goes as a modern historian would tell it. But the sources… well, they supply a rather different one.

When Liberius was deported to Thracia, the people of Rome pleaded that he be restored to the episcopal see. The establishment refused the request, brandishing some letters allegedly by the hand of Liberius which demonstrated his collusion with the Arians. Forged, of course, but which attest that an alternative truth was already cast. Later on, Jerome of Strydon, one of the most prominent and influential Fathers of the Church, was among the closest supporters of Damasus: a historical work of his, the Chronicon (ca. 380), affirms explicitly the legitimization of Damasus’ election, and will become a key source for later biographies of Felix. No later than 440, Felix is included in the official lists of Roman pontifices, and his portrait stands out in the Basilica of St-Paul-outside-the-Walls, where the images of all the legitimate popes have been collected until our time.

Even more than a century later the clash between Liberius and Felix proved useful in political conflicts: during the Laurentian Schism (498-507), the opposing parties placed themselves in the memory of Liberius and Felix respectively. Among other political pamphlets, the supporters of Symmachus created the Gesta Liberii (The deeds of Liberius), while their adversaries (in the name of Laurentius, hence the name of the Schism) responded with the Gesta Eusebii (The deeds of Eusebius), a cleric regarded as a martyr for having been killed at the hand of Liberius’ upholders.

People turned to the stories from the past because – if appropriately reinterpreted – they were able to provide arguments in support of the stance of either one or the other faction. But then other concerns were added to these reasons: through remembering Eusebius, it was unavoidable that the figure of Felix gained momentum again; probably, the fact that the cult of Felix of Nola – a martyr from Campania – was popular in Rome in those days also played a role. Anyway, the first Passion of Felix was composed in Latin around those years: this is a short and simple text that presented him as a holy martyr, killed by the Arians. This new account stresses Felix’ holiness and his brave defense of orthodoxy, while highlighting the wickedness of Liberius, who launched persecutions against non-Arian Christians: Felix himself fell victim to them.

The power of manuscripts

The transformation of Felix was finally accomplished: from being an antipope, elected illegitimately, and a “heretic”, he had arisen to the status of martyr and saint, the champion of orthodoxy, murdered by Liberius and Constantius in cahoots for the triumph of heresy.

This Felix was the figure who enjoyed fame all throughout the Middle Ages. We know of more than eighty preserved manuscripts that contain his story, written in every area of Western Europe: Italy, France, Germany, Austria, Britain. And many more are probably lost.

Felix obtained his prominent spot among the saints of Christianity: his praises were sung by monks during the office, his deeds were recounted by preachers from the pulpit, a place for him was secured in liturgy. Thousands and thousands of persons read of him, countless more heard of him: and hardly anyone knew who Felix actually was, nor had insights of the circumstances in which the text in their hands saw the light. The dynamics of manuscript circulation did not allow for such an awareness: a text speaking of a saint was handed down to them, and this was enough in order to credit him with worship and veneration.

Felix did not lose his political influence either. At the end of the 10th century, an anonymous author took a copy of his passion, and rephrased it into a piece of literature: magniloquent style and even sections in poetry embellish this revision. In such a new shape, Felix is likened to Silvester, the pope that led Christianity to prevail over Paganism under the aegis of Constantine the Great; and the Rome of Constantine and Silvester is celebrated as a Golden Age. Only a single manuscript transmits this new version, but it is not a codex of little importance: Vatican City, Vatican Library, Arch. S. Pietro A.4. A majestic book (ca 50 x 35 cm), this manuscript from the 11th century is an official product of the scriptorium of the popes, inked by professional scribes and illuminators. It embodies several texts that served the purposes of the so-called “Gregorian Reform,” a pivotal process of renewal of the Church that took place in the second half of the 11th century.

Clashes between popes and emperors were still at stake at that time, for instance because emperors arrogated the right to nominate bishops. As an exemplary model, the “new” Felix – sacrificing his life to counter the iniquitous claims of Constantius – served the purposes of the 11th-century Vatican chancellery very well, and hence enjoyed a new life more than seven centuries after his time.

This article is part of The Power of Medieval Texts series

Shari Boodts, Iris Denis, Riccardo Macchioro and Gleb Schmidt together make up the team behind a European research project on the reception of patristic sermons in medieval manuscripts (PASSIM), housed at the Department of Medieval History at Radboud University Nijmegen, the Netherlands. You can learn more about their work on the project website.