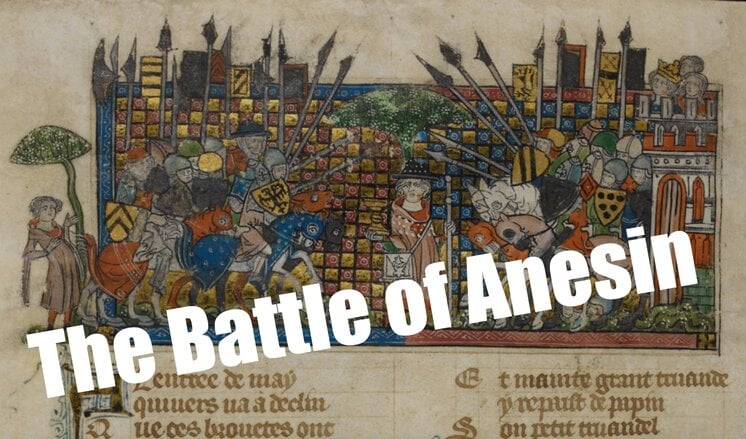 It might seem that medieval people loved the idea of war – many works offer praise for those who fought with their heroics and chivalry. But you can also find writings that tell a different story.

At the end of a manuscript from the early fourteenth century there is a short poem – it only takes up two pages – that tells the story of the fictional Battle of Anesin. The poem was written by Thumas of Bailloel, and all he adds to his identity was that he composed the piece “very near Seclin.” We know of no other writings by him.

The opening lines of the poem tells the story of some peasants going about their business, including shepherds who talk of Marion and Robin, and clerics and lads who love women – and “go so far as to love at the same time his neighbour’s wife.”

The scene then abruptly moves to a city called Anesin, where two great armies are converging. On one side you have Persians, Indians, Greeks, Armenians, Lombards, Gascons and several other nations, while the army opposing them consists of Slavs, Africans, Germans, French, Normans and a few more. Amongst them one can find many kings, counts and fine knights.

As this is happening, the poet makes note of:

The ladies were high up in the marble palace,
seated at the windows, their heads bowed with sorrow
looking at the two armies, whence came a great noise
Of drums, trumpets, and many an ivory horn,
and where each one had her brother, cousin,
or loyal lover she loved with a pure heart.
If they were sad, they had reason to be, by St. Martin.

A queen remarks how the battle that is about to happen will leave a very many dead. The scene then returns to the battlefield where:

The two armies neared each other with fierce countenance,
where you could see many a lance of ash and pine,
many a helmet, hauberk, and steel sword,
and many a cover of Alexandrine weave.

Then, suddenly, the poem concludes:

I, who all alone sat beneath a hawthorn,
saw approach between the two armies a pilgrim
who reconciled them all with a full cup of wine.

This short poem, only forty-nine lines, is certainly quite strange, especially with it ending by having a pilgrim coming in between the armies and using a cup of wine to stop the battle. Why was it written?

John Haines’ research on the poem suggests that it is a parody about warfare, taking direct aim at the accounts of the Battle of Bouvines (1214). The conflict, in which King Philip II of France defeated a coalition of the forces of England, Flanders, and the Holy Roman Empire, was certainly glorified in France for decades afterward. There are several clues in the poem, such as the placenames of Anesin and Seclin, which are near Bouvines, as well as the heraldry on the shields depicted in the accompanying illustration, which make a convincing argument that we are reading a satire about the battle. Moreover, it also offers a parody of the chivalric literature that was popular in the thirteenth and fourteenth centuries, where war was all heroic and praised.

In this poem, everything is taken to an absurd level, including the vast armies, seemingly assembled from across the globe. So is the very abrupt and silly ending, which could have easily been a part of Monty Python and the Holy Grail.

Parodies were always part of medieval European literature, with writers looking for ways to ridicule and make fun of the elites of their society. The poem of the Battle of Anesin is very much in this vein, mocking those works that glorify war. As John Haines explains,

Thumas was especially keen to demonstrate how war, waged in the name of religion, breaks religion’s main mandate to love one’s neighbor. Instead, battle does violence to those least equipped to defend themselves, especially women and children of poor rank. It is caused by those best protected, such as princes, kings, and counts who defend the comfortable lifestyles of clerics, nobles, and ladies.

Although The Battle of Anesin was just one poem and perhaps the ideas of just one man, it does reveal that even in the Middle Ages, where war and warriors were often praised, there were those who mocked such things as well.

To read more, including a full translation of the poem, please see John Haines’ article, ” ‘The Battle of Anesin’: A Parody of Songs in Praise of War,” which appeared in Speculum 82:2 (2007).

This article was first published in Medieval Warfare magazine Issue IX:3 – you can buy that issue here. You can also get new issues of the magazine through our Patreon – click here to learn more.