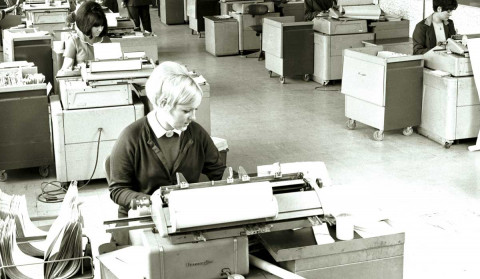 When lockdowns first started in 2020, many white-collar workers came home to find that their jobs were already there waiting for them. Technology had long attained sufficient immediacy and sophistication for most clerical, managerial and administrative tasks to be undertaken well beyond the bounds of their traditional haunt, the office. Two years on, as quarantine regulations have started to taper off and workplaces have reopened, the necessity of the office has been called into question. If white-collar work can take place anywhere, then what are offices for?

The irony that underlies the current debate between remote work and the office is that office work is itself a kind of remote work. Why surrender control of a province to a capricious fief when it can be ruled more or less directly from Versailles? Why risk shipwreck, tropical disease and local resistance when colonial profiteering can be overseen from London? And why rely on the ‘mysteries’ of guilds and artisans when industrial-scale divisions of labour can be planned out meticulously from the comfort of a factory back office? The office is a technology that allows for unprecedented levels of insight and control; it concentrates knowledge and power in a single location – and it was for this reason that the monarchies and trading companies of 17th- and 18th-century Europe pioneered some of the earliest forms of modern bureaucratic management.

It was over the course of the long 19th century, however, that office work went ‘mainstream’ in the West. The massive growth in trade, industry, finance and transport needed huge staffs of office workers to communicate, consolidate, transpose, store and retrieve relevant data – a process that also bred a mass of lawyers and their clerks to mediate the proliferation of commercial and personal interests. Rapid social and geopolitical change also compelled governments to expand and consolidate their powers by bureaucratic means: wars were won, regimes asserted, schools and prisons built, all through the power of the desk. Indeed, the French First Republic and Empire arguably owed their successes to the ‘twenty-thousand fools’ of the civil service (as the revolutionary ‘Angel of Death’, Louis-Antoine de Saint-Just, contemptuously described them).

In 1921, looking back on this period of administrative expansion, Max Weber typified bureaucracy as a machine composed of desks, documents and men (and increasingly women) that could outpace and outperform any of the more ungainly modes of organisation that preceded it. Although Weber is perhaps the most famous theoriser of ‘rule-by-the-desk’, his 19th-century predecessors also recognised its significance. For liberal thinkers, such as Jeremy Bentham and G.W.F. Hegel, and utopians, such as Henri de Saint-Simon, bureaucracy showed the perfectibility of human institutions – the ‘crooked timber of humanity’ could at last be straightened out. But militarists, including Napoleon Bonaparte, also recognised the edge that bureaucratic organisation gave them on the battlefield – an advantage later espoused in business by the management gurus of the long 19th century: Charles Babbage, Henri Fayol and Frederick Winslow Taylor. Indeed, bureaucratic power was also something to fear: 19th century conservatives distrusted anything with such clear roots in Enlightenment principles (however useful it may be). But liberals, including John Stuart Mill and Alexis de Tocqueville, also worried that the concentration of power in offices boded ill for the free market and democracy alike. On the left, bureaucracy was criticised for wresting autonomy from the workers – and the relative prestige of ‘white-collar work’ (a term derisively coined by the American novelist Upton Sinclair) made office staff notoriously difficult to unionise.

In contrast to the hopes and fears of its contemporary observers, a striking feature of 19th-century bureaucracy today is its crudeness. The time-consuming, painstaking tasks that constituted the ‘thraldom of the desk’ contrast strongly to today’s near instantaneous communication and free-floating digital networks. The sense of the material character of the office comes across most strongly in the period’s literature: Charles Dickens, Herman Melville and Nikolai Gogol are all famous for portraying the dreary world of the clerk. One of its most vivid depictions, however, comes from Honoré de Balzac’s 1844 novel, Les Employés [The Government Clerks]:

Nature, for the clerk, is the office. His horizon is on all sides bounded by green box-files; for him, atmospheric circumstances are constituted in the air of the corridors, in the breath of other men that fills unventilated rooms, in the smell of papers and pens; his landscape is a cubicle … the heavens for him are a ceiling, to which he addresses his yawns, and his element is dust … Distinguished doctors remonstrate against the influence of this nature – at once savage and civilised – on the moral being contained in these frightful compartments, known as offices.

The offices of the past appear to make a case for remote working today. When paper and pigeonholes were the most advanced means of storing data, gloomy offices were a necessary evil. Surely, now that bureaucracy has shed its gross flesh and ascended to ‘the cloud’, we can say goodbye to these ‘frightful compartments’ forever. However, 19th-century ‘office literature’ also provides a warning.

To the remote worker of the 2020s, J.K. Huysmans’ 1888 novella Monsieur Bougran’s Retirement reads like a cautionary tale. Forced into retirement from the civil service, Bougran is at a loss. Despondently strolling around an orchard, he sees trees that ‘no longer had the form of trees’: ‘under the pretext of extracting better fruits’ from them, they had been ‘murdered’. Realising that his spirit has been similarly mutilated by office life Bougran resolves to replicate his old job at home. He constructs an office in his flat and whiles away his days copying and amending letters – he even ‘commutes’ via a walk around the block every morning. He dies ‘happy’: at his desk, halfway through penning a final document.

For Huysmans the most profound effects of office life could be felt well beyond its walls – and what was once a self-contained workplace is today indeterminate. Whether we work remotely or not, the death of the office has been greatly exaggerated.

Daniel Jenkin-Smith is an associate lecturer at Aston University, Birmingham.