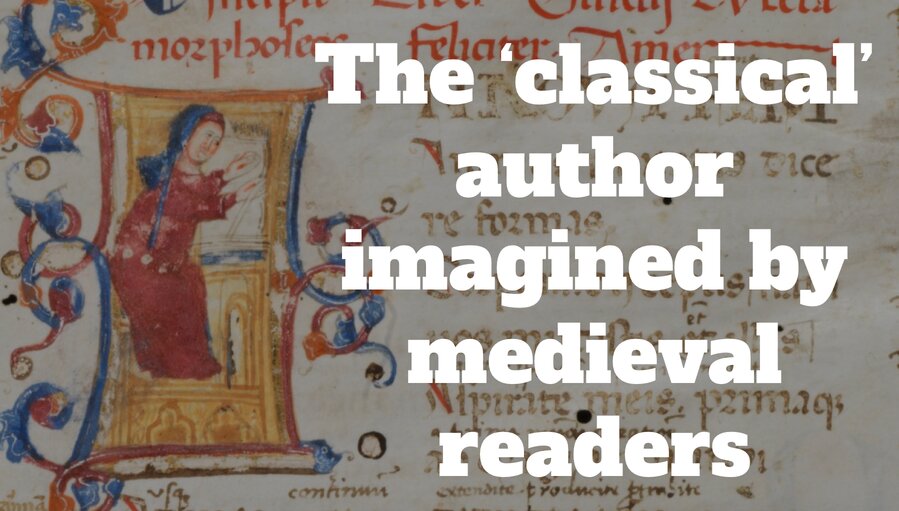 As we have seen several times in this series, authors were generally not able to exert much control over the medieval dissemination and interpretation of their texts, or even about the texts that were (sometimes completely erroneously) attached to their names. The legacy of Latin authors we now call ‘classical’ – including their image and reputation – was shaped and sometimes truly transformed by generations of medieval readers who each, presumably, formed an image of these authorities in their minds, often filtered through the lens of the medieval world they knew.

Although, unfortunately, we can’t get inside readers’ heads to see how this process of legacy-building took place, we can find snapshots of readers’ engagement with the ghostly figures behind the texts they encountered in manuscripts. How – if at all – did medieval readers understand and imagine the authoritative authors – auctores – whose words they were reading or listening to?

Sometime in the mid-ninth century, Ermenrich of Ellwangen recounts a nightmarish event. Often, after reading Vergil, the monk lay his head down to rest. In his sleep, he was visited by a specter (fantasma) who turned out to be a monstrous, mocking version of the classical poet, ‘horrible all over’ (per omnia terribile), supplied now with a codex and stylus, then with a trident, which, Ermenrich carefully suggests, might have been the Roman god Pluto’s, or someone else’s. Even after Ermenrich had crossed himself and threw the book in question far away from him, the specter had returned to terrify him. Afterwards, Ermenrich committed his vision to writing in a long letter to the abbot Grimald, that was included in a manuscript compilation to be read by a new set of readers.

This well-known, colorful episode aptly illustrates the ambivalent medieval approach to classical authorities, which often involved a tenuous balancing act between admiration and anxiety. On the one hand, the works of well-known classical authors – such as the poets Vergil, Horace, Ovid – were part of the Latin curriculum in many medieval classrooms. The manuscripts that transmitted them were supplied with glosses, signs and other marginal annotations, often by multiple readers, which revealed that these texts were not just passively absorbed, but actually used. In his long letter to Grimald, Ermenrich himself continuously cites from the works of classical authors – including Vergil’s.

On the other end of the spectrum there were Christian readers, who, like Ermenrich and St. Jerome before him, expressed experiences that betray a certain anxiety about the perceived distance between the world of these Roman authorities and their own. Some found creative ways to bridge the gap. Medieval commentaries on the work of the Roman poet Horace, for instance, often paint a picture of this author as someone who dispenses moral wisdom ‘like a monk’ (quasi monachus) – although, as his poems testify, Horace certainly seems to have been anything but. The fourteenth-century author of the famous Ovide Moralisé took these strategies a step further when he assumed the mammoth task of rewriting and explaining the Metamorphoses to reflect their (supposed) Christian allegories.

Often, collections of classical Latin poems were preceded by accessus – introductions that included formalized biographies of the authors being read. Despite their often fixed structures, these biographies could contain very creative and imaginative elements. Virgil was often believed to be endowed with magical powers, and the obscure reasons for Ovid’s exile proved just as intriguing for medieval as for modern scholars. Despite – or even because of – the fictitious nature of these biographies, classicists have recently set out to revalue them as sources, not so much for the poets, but for the readers who imagined them.

Of course, there are also visual sources that can literally present a ‘portrait’ of an author as imagined by the artist. Yet, unless clearly indicated by a name or attributes, the interpretations of such portraits in, for instance, manuscripts can be difficult – is the figure of a scribbling man accompanying a poem by Ovid meant to be Ovid himself, or the scribe, or a more generic imagining of ‘someone who writes’?

Other creatively reimagined authors show up in newly created literary works. The late-antique writer Fabius Planciades Fulgentius wrote a work in which the shade of Virgil, quite disdainfully, explained the ‘true moral meaning’ of the Aeneid to the persona of Fulgentius himself. Much later, the poet and bishop Baudri of Bourgueil wrote a set of fictitious verse letters to and from Ovid in his exile. Much later than that, authors such as Dante and Petrarch famously brought auctores to life as, respectively, characters in their literary works, or addressees of their letters.

The ‘specters’ – to borrow a term from modern authorial theory – of classical school authors, then, haunted some of our medieval readers in various ways. But what about the image of Christian authorities? Was their legacy shaped in a way that is similar to that of ‘pagan’ Roman authors, or did they fall into a very different category of authorities?

We find a hint in the work of Possidius, the late-antique biographer of St. Augustine, who seems to anticipate that these authors’ ‘afterlives’ were shaped similarly. Writing shortly after Augustine’s death, Possidius directly compares the bishop’s intellectual afterlife to the epitaph of an unnamed secular poet, which confidently expressed the idea that the poet would be living and ‘speaking’ through those who would read his epitaph. The same principle applies to Augustine’s library of books and treatises, in which, Possidius states, “he is found by the faithful to live forever” (Vita Augustini, 31, 8). Possidius’ prediction neatly ties traditionally ‘classical’ and ‘Christian’ approaches to authors’ legacies together. The works of Augustine and his fellow Patres, by the way, were certainly read, excerpted, and compiled throughout the Middle Ages – but that’s a different topic, that warrants a series of its own.

This article is part of The Power of Medieval Texts series

Shari Boodts, Iris Denis, Riccardo Macchioro and Gleb Schmidt together make up the team behind a European research project on the reception of patristic sermons in medieval manuscripts (PASSIM), housed at the Department of Medieval History at Radboud University Nijmegen, the Netherlands. You can learn more about their work on the project website.

The dream of Ermenrich is discussed in e.g. Anna Lisa Taylor, Epic Lives and Monasticism in the Middle Ages, 800-1050 (2013), chapter 3, and Mariken Teeuwen, ‘Seduced by Pagan Poets and Philosophers: Suscipsious Learning in the Early Middle Ages’, in Concetta Giliberto and Loredana Teresi, Limits to Learning (2013). Nora Goldschmidt includes an analysis of accessus on Ovid and Vergil and the example of Boudri of Bourgeuil in her Afterlives of the Roman Poets (2019), chapter 1. See for medieval commentaries on Horace e.g. the work of Karsten Friis-Jensen bundled in The Medieval Horace (2015).