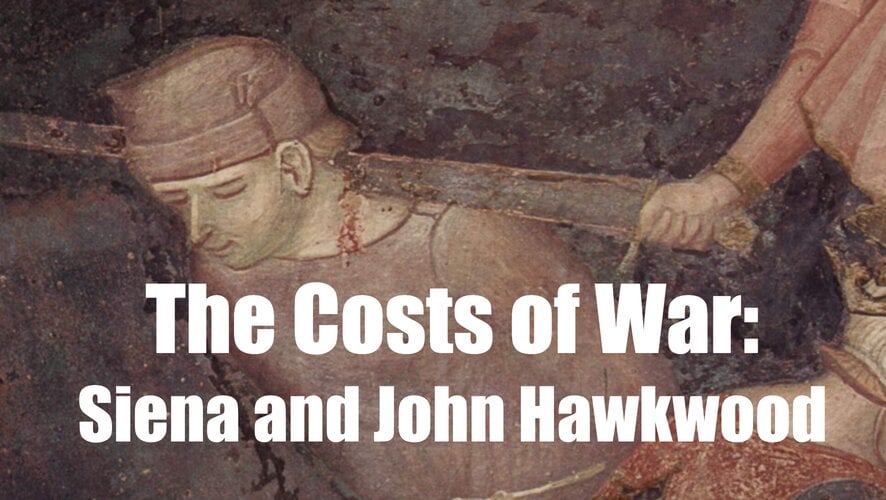 One day – the story goes – John Hawkwood was walking near his estates at Montecchio, when he came across two Franciscan monks. The monks greeted him, saying, “May God grant you peace.” The mercenary replied, “And may God take away your alms.” The shocked monks asked, “Sir, why do you speak to us this way?” “Don’t you know that I live by war,” Hawkwood answered, “and peace would destroy me? As I live by war so you live by alms.”

When historians cover topics such as the condottieri and their impact on medieval Italy, they often focus on how successful men like John Hawkwood were, and how the wars of this period established the dominance of cities like Florence and Milan. However, much can (and should) be said about the victims of these conflicts.

One of William Caferro’s most interesting books is Mercenary Companies and the Decline of Siena, which follows this Tuscan city during the latter half of the fourteenth century. Siena, which had a population of around 10,000, would have been considered a mid-level power in Italy, usually overshadowed by nearby Florence. This city-state had its own wars to fight, but would also find itself caught up in the other conflicts around it.

Worse still was that it would become a victim to the predations of the mercenary companies, who would target Siena sometimes in the service of other states, but often just for their own greed. Between the years 1342 and 1399 the city would be raided thirty-seven times by the condottieri, with John Hawkwood a prominent figure in many of these attacks.

The people of Siena did try to defend themselves, and on some occasions managed to defeat the mercenary companies. However, the Black Death in 1348, followed by repeated outbreaks of plague and famine, had weakened the city. Often the Sienese were forced to pay bribes to get the condottieri to leave. For example, when John Hawkwood and his men raided in 1375, the government paid them 30,500 florins to depart their territory. But the total cost was nearly twice as high, for the city also had to pay money to the mercenary leaders (as gifts), and compensate the condottieri for their losses (such as the death of a horse). Keep in mind that during this time the cost of living for an average person was 14 florins a year.

These continuous attacks and raids forced the government to raise more taxes, borrow money where they could, and even sell off properties and whole towns. It gradually made them weaker and weaker, thus more vulnerable to the condottieri. The elites who governed the city could not maintain power, and the younger men decided they had no future there and left to become mercenaries. How sad it must have been to be in Siena during these decades, to see their city looted by criminals and thugs, and have no means to stop them. As one chronicler lamented: “Almost the whole world found itself troubled and destroyed, whence everyone said the time of the world’s end had come, as the scriptures say.”

This article was first published in Medieval Warfare magazine Issue VIII:1 – you can buy that issue here. You can also get new issues of the magazine through our Patreon – click here to learn more.

Top Image: Detail from the Allegory of good government by Ambrogio Lorenzetti in Palazzo Public Siena