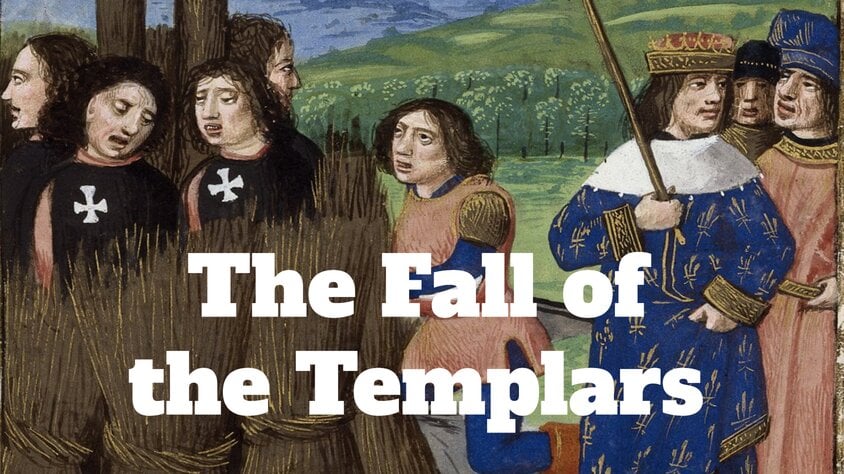 On 13 October 1307 agents representing the French crown conducted a coordinated operation across the kingdom, arresting members of the Knights Templar. For the Templar Order itself this was the beginning of the end; the start of a process that would conclude in the dissolution of the order and ultimately the execution of its master, James of Molay, in 1314.

The dramatic events of this time have provoked centuries of debate and speculation with the focus squarely centred on the questions of why King Philip IV chose to arrest the Templars and then whether the Templars were actually heretics (as he claimed). Yet there is another more practical question to be asked – why did the king of France think that he had the power to bring about the Templars’ downfall?

The Templars were not defenceless. Holding castles along some of Christendom’s most embattled frontiers and deploying large formations of elite knights and footsoldiers, the order was heavily armoured. They also possessed landholdings or ‘commanderies’ across Western Christendom – not just in France – so it might be asked why the confiscation of their lands in one country should lead to the fall of the order as a whole. Angry rulers had confiscated Templar landholdings in the past; why was the king of France’s actions in 1307 any different?

The answer to these questions lies in the fundamental nature of the military orders. All the larger orders operated on the same principle: their survival required the maintenance of a good reputation. Back in their early years the Templars – like the other military orders – had prospered because thousands of patrons, across the social spectrum, felt sufficiently invested in the order’s objectives to donate land and wealth to support their activities. This was the root of their wealth and growth. Over time, Templars grouped together their many donated lands, properties and other assets into tens, later hundreds, of commanderies spread across Western Christendom. These commanderies then acted as administrative hubs coordinating the order’s activities at a regional level. Their importance lay in the fact that each commandery despatched one-third of its income to support the order’s activities on Christendom’s frontiers and their cumulative income was truly substantial. They also acted as mustering points for new recruits as well as crusaders and pilgrims, intent on setting out for the Holy Land.

In this way the order’s rapid evolution into a vast international institution – commanding squadrons of ships, companies of knights, constructing castles and conducting diplomacy – was underpinned by its network of commanderies in the west. These provided the funds and resources to finance the order’s actions on the frontier. True, the order’s holdings in the borderlands could generate some wealth themselves, whether through farming, trade or plunder gathered in war, but these revenues could only support a fraction of the order’s overall effort, causing them to lean heavily on their incomes from Western Christendom.

The result was in many ways an exceptionally robust structure. By channelling their international resources into frontier regions, the orders could deploy extensive military forces in those areas, making them a major power. Moreover, in the event of a defeat, they could simply call forwards new troops and new resources from their distant commanderies to replace their casualties.  This was expensive, but it also enabled them to ‘bounce-back’ very quickly following a defeat.

There was however a glaring weakness to this structure; their whole establishment rested on maintaining a positive public reputation. The order’s western commanderies did produce their own revenues through farming, mining, rents etc., but they still relied heavily on voluntary donations and of course on recruits to populate their ranks. Moreover, with their military assets concentrated on distant frontiers, their western commanderies were virtually undefended. When King Philip’s agents made inventories of the Templars’ goods seized during the arrests they found virtually no weapons, certainly not enough to raise even a moderate military force.  Consequently, each commandery relied on the willing and active support of their local patrons to provide for their protection. This wasn’t necessarily a problem; lots of other non-military monastic orders held large estates which they could not defend with troops. It does however raise the awkward question of what would happen if these patrons decided to turn against the Templars? In that circumstance – with their donations drying up, their recruits vanishing, and their landholdings threatened – they could offer virtually no defence except to appeal to the papacy for assistance.

This was the danger and it had happened before. Back in 1229, Emperor Frederick II believed the Templars and Hospitallers to have turned against him during his crusade to the Holy Land.  Consequently, he confiscated their estates in his Sicilian lands. This posed a major problem for both orders; not only were these estates very lucrative but they were also vital waypoints enabling the order’s communications between Western Christendom and the Holy Land. Still, although these actions created problems for the orders, they did not represent an existential threat. Frederick and his supporters complained about the orders to their friends and correspondents, but no one showed much interest in following Frederick’s example. So what made Philip IV’s actions in 1307 so much more dangerous for the order?

The key point was not Philip’s arrest of the French Templars or his seizure of their property, but the nature of the allegations he made against them, most importantly the charge of heresy. This charge was devastating for the order.

Human societies have a tendency to focus their collective fears on specific threats, real or perceived, to which they allocate a disproportionate amount of their attention. In fourteenth-century Christendom, this threat was heresy. As is often the case when people work-up their terrors to a fever pitch, the mere act of making an allegation becomes immensely dangerous, the lightest suggestion being enough to tarnish permanently an individual’s – or an institution’s – reputation. In such cases, even the strongest proofs of innocence never really remove an underlying unease that there’s ‘no smoke without fire’ – no allegations without at least some factual basis.

So, when Philip IV accused the Templars of heresy, he was essentially attacking them at their most vulnerable point. The military orders’ weak spot was their public reputation in Western Christendom and, even though this accusation had never really been made before, it immediately posed an existential threat. They needed to maintain a strong public image to ensure that eager new recruits would populate their ranks, admiring donors would grant them money, and regional nobles would protect their estates. Remove these supports and the order would collapse. Furthermore, the charge of heresy could deter the order’s remaining supporters and defenders from rendering aid; their fear being that to defend an accused heretic is to expose yourself to the same accusation.

Other detractors with existing grudges against the Templars became emboldened, either restating their own cases or joining the chorus of those calling for their destruction. In hindsight, Philip’s allegations were so uniquely aligned with the social anxieties of his day, and so ideally suited to utterly destroy the order, that it is hard not to draw the conclusion that they were deliberately fabricated for this very purpose.

The papacy tried to intervene to protect the order, or at least to gain some purchase-hold over the development of the trial, but made little headway given the French king’s persistent efforts to arouse public outrage against the order, all the while applying as much political pressure as possible on the pope to achieve his ends. The result was the dissolution of the Templars.

Viewed in hindsight, it might be claimed that the Templars’ dependence on maintaining a strong public reputation made their ultimate demise inevitable. The argument could be advanced that an institution built on the strength of its public appeal was always doomed to fall the same way – when that appeal collapsed. Yet, other military orders’ found a way to mitigate this danger. It is notable that both the other large military orders, the Hospitallers and the Teutonic Knights, faced serious accusations and attacks on their reputations during the time of the Templar Trial, but they both survived these challenges.

Several reasons could be supplied, explaining why they survived and the Templars did not. Much depends on the specific events and personalities involved in accusing/defending the orders at these moments while the extent of the political leverage exerted by their accusers also weighs in this equation. Yet, there is another factor as well. By 1307 both these orders had acquired independent territories of their own. The Hospitallers were in the process of conquering the isle of Rhodes, which in time would become their headquarters; the Teutonic Knights controlled the lands of Prussia Livonia on the Baltic shoreline. Possession of these independent countries conferred an additional degree of protection because, even if their reputations in Western Christendom collapsed, their overthrow could only really be achieved at the point of the sword, rather than in the uncertainties of the court of public opinion.

Nicholas Morton is an Associate Professor of History at Nottingham Trent University in the UK. He is the author or editor of several books covering different aspects of Medieval Near Eastern history. These include The Crusader States and their Neighbours: A Military History, 1099-1187 (Oxford University Press, 2020) and The Field of Blood: The Battle for Aleppo and the Remaking of the Medieval Middle East (Basic Books, 2018). You can follow Nicholas on Twitter @NicholasMorto11

Nicholas Morton, The Mongol Storm: Making and Breaking Empires in the Medieval Near East (Basic Books, 2022)