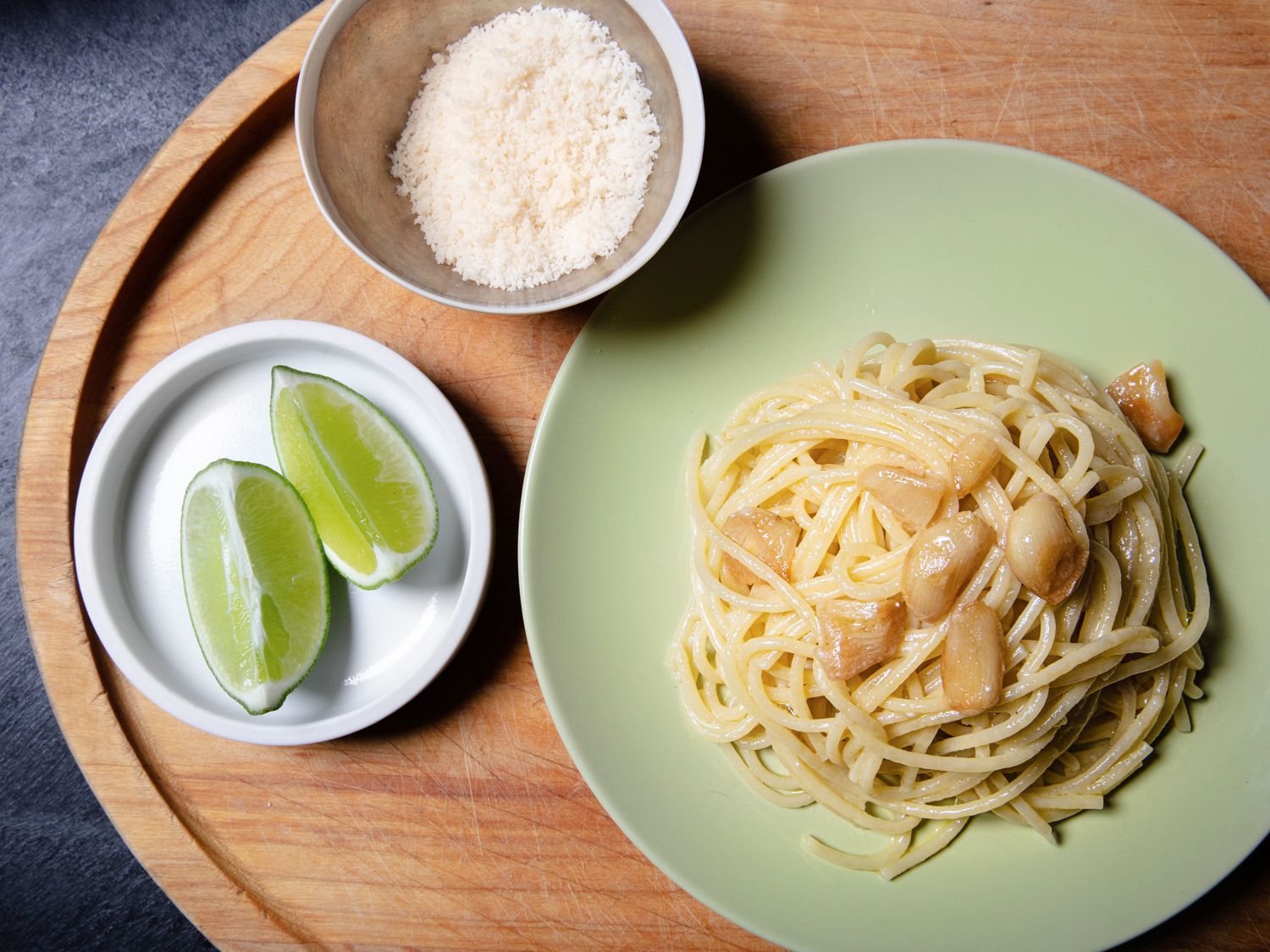 This is a very simple pasta recipe. It’s made with a literal handful of ingredients, comes together in about the time it takes to bring a pot of water to boil and boil pasta in it, and it requires a bare minimum of knife work, all of which can be done with a paring knife.

Call it a pantry pasta.

Of course, as we’ve been taking great pains to emphasize in recent years, not everyone’s pantry is the same. A cook who makes a lot of Korean and Japanese food will probably have a very different roster of pantry staples than one who makes a bunch of Italian or Thai food. However, given the popularity of pasta, and the ubiquity of real Parmigiano-Reggiano in American grocery stores, I think most readers of this site are likely to have the ingredients called for in this recipe on hand; if not, they can very easily buy them.

All you need is spaghetti, a head of garlic, some (good) extra-virgin olive oil, salt, a smidge of honey, a small amount of Parmigiano-Reggiano, and a lime (a lemon is [Ina Garten voice] fine).

Before we go further, I want to note, too, that this isn’t some traditional Italian pasta recipe. I did not spend a semester abroad in Florence, living with a charming Italian family with a charming Italian foster mother; I was not inducted into a small circle of Sicilian secrecy when some nonna whispered in my ear the magic song for making pasta. This recipe is the product of two years and change working from home and making lunch for me and my wife every day. Some days it was leftovers, others it was a fuller, better meal, like a bowl of ramen, and on still others it was something I made with whatever we had on hand, which almost always included garlic, olive oil, parm, and pasta. And while this may initially seem to be simply a variation on aglio e olio—it is, after all, a garlic and olive oil pasta—it isn’t. Nevertheless, I welcome the fury of the Italians mad online.

The idea for this pasta started with a relatively empty pantry, but it was also inspired by the little garlic nubbins in this recipe for beef donburi. My reasoning was simple: garlic nubbins are delicious; garlic and pasta is delicious, so why not combine them? The idea became even more attractive to me when I realized that you could make golden nuggets of garlic with a meltingly soft consistency by tossing them in oil and cooking them quite gently for about the same amount of time it takes for you to bring a pot of water to boil, add pasta, and cook the pasta to al dente.

The only possible issue I could see was that this idea ran the risk of being unutterably bland. Yes, golden garlic nubs are delicious, but they’re exceptionally delicious in that beef rice bowl because they are accompanied by seared ribeye, its delicious fat, and a savory sauce of sake, mirin, and soy sauce (and butter), and lots of beautiful white rice, the best starch. My pasta idea had none of those delicious things in it.

And yet, it’s still quite good, solely because of the little bit of Italian pasta alchemy known as mantecatura; basically, it’s good because you can infuse a whole lot of garlic flavor into some extra-virgin olive oil, and then disperse that oil evenly and easily through water, with the help of some of the starch released by the pasta as it cooks and some vigorous tossing and stirring, creating an emulsion. That emulsion gets a little assistance from melted Parmigiano right at the end; it becomes creamy and salty and a little tangy, and it clings to each strand of spaghetti quite persistently, without being heavy or cloying. A little honey offsets the savoriness of the preparation, and a little lime juice brightens it up a bit. Twirl it on a plate, grab the garlic nubbins and lay them on top, as you would a few pieces of crisped guanciale or pancetta on some other, superior pasta, and then top the mound off with a little more grated cheese.

It can be a little tricky to get a proper emulsion if you use too small a pan or try to load up a nicely sized—perfect, some might say—pan with more pasta than it can handle. As a result, I tested and developed this recipe using a half pound of pasta at a time, which, if you use that perfect pasta pan, gives you a lot of room to maneuver and flip and toss and stir the spaghetti strands. It can be doubled easily, but tossing the pasta and getting the sauce right will be a little more physically taxing; just toss and stir vigorously and it should come together, although it may take a little bit more time.

Is it better than the understated perfection that is aglio e olio? No. Is it sufficiently different from aglio e olio that you could eat aglio e olio today and eat this pantry pasta tomorrow and not feel like you’re eating the same thing? Yes. When you’re stuck making yourself lunch every day, that’s all you really need, although it helps that it’s also pretty tasty.

Fill a 3-quart saucier with 3 quarts cold water, add salt, and bring to a boil over high heat.

While the water heats, combine olive oil and garlic cloves in a pasta pan or wok and place over low heat. Cook, stirring ocasionally, until garlic takes on a light golden color and cloves become meltingly soft, about 15 minutes.

Add spaghetti to now-boiling water and cook until just al dente, about 1 to 2 minutes less than package instructions.

While pasta cooks, when garlic just starts to take on golden coloring, add honey to pan and stir to combine. Increase heat to medium high and cook, stirring constantly, until garlic cloves just start to lightly brown in spots, about 2 minutes. Add 1/2 cup of pasta water, increase heat to high, and bring to a boil.

Turn off heat and add grated cheese. Toss and stir pasta until cheese melts seamlessly into the sauce. Add lime juice and toss to distribute. Season to taste with salt. Serve immediately with halved limes and more grated cheese alongside.

This dish is best served immediately.