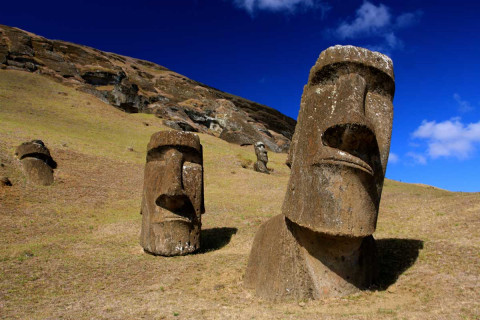 There were around 1,000 moai. Most were carved in tuff, a yellowy-brown condensed volcanic ash from Rano Raraku, the island’s largest volcano, although a few were created from harder solidified basalt magma. Many wore large cylindrical ‘hats’ (pukau) carved from red volcanic scoria. Most were placed on raised stone platforms (ahu), often arranged in long rows. The majority of the moai were found on the three main coastlines of tricorn shaped Rapa Nui with their backs to the sea, as though forming a protective guard around the island. Some were placed on what may be ancient roads leading to the crater rim of Rano Raraku. It is thought that they were created sometime between 1250 and 1500.

The moai exert a powerful presence, with distinctive features that typically include a deep brow and eye sockets, prominent equine nose, flared nostrils, elongated earlobes, strong jawline and clearly delineated lips. They may have represented ancestors of the islanders and those placed on the slopes of Rano Raraku may have formed a road of remembrance. Their carving is thought to have been part of a structured ritual communal activity, deeply embedded in the cultural life of Rapa Nui’s inhabitants. One of the best-known moai, now held in the British Museum, is named Hoa Hakananai’a, which translates as ‘silent or hidden friend’.

Around 1600 the fragile ecosystem of Rapa Nui collapsed, with widespread famine and alluvial landslides, perhaps due to changes in the nesting habits of the migratory birds on which the islanders fed and deforestation following widespread construction of the remarkable ocean-going catamaran canoes for which the Polynesians are famed. The collapse seems to have resulted in a change to the ritual use of some moai to accommodate a newer birdman and fertility cult in an attempt to win back the favour of the gods. Richly painted carvings were created on the backs of the moai, depicting half-bird, half-human figures with prominent beaks and what may be abstract representations of female genitalia, komari.

The first Western encounter with Rapa Nui was on Easter Day 1722, with the arrival of the Dutch explorer Jacob Roggeveen. Very soon almost all existing moai on Rapa Nui had been toppled; by 1868, none remained standing. A conservation project, begun in the 1950s, has since restored many moai around the island.

Unsurprisingly, they have influenced several modern sculptors, including Elisabeth Frink, Henri Gaudier-Brzeska and Henry Moore, and in 2010 they entered the internet age, becoming the basis for a new emoji.