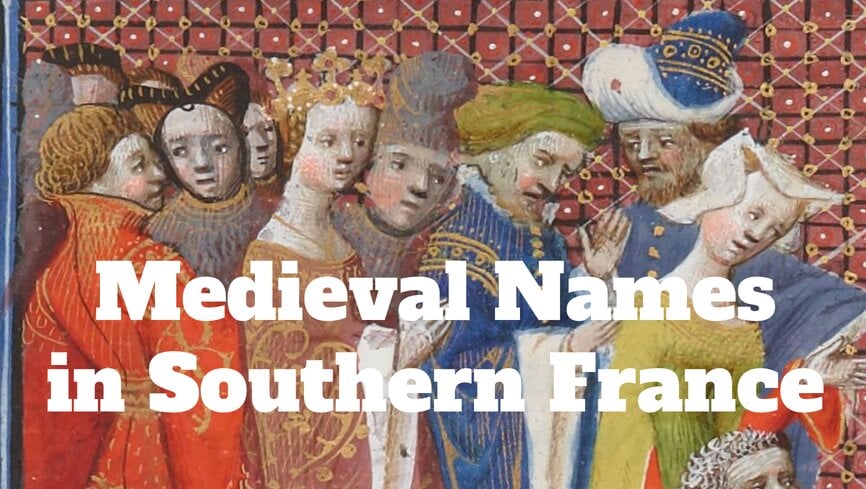 Here are the top three names for medieval men and women in southern France, as well as some of the more uncommon names you could find in the region.

To learn what the most common names of medieval people were, historians can analyze different types of sources. Fiscal records immediately come to mind. In England, the Domesday Book from the eleventh century or the Poll Tax records of the late fourteenth are amongst the most common documents used to that effect. Working on the South of France, I also have access to fiscal records. I’ve mined them for instance to establish a shortlist of the most common jobs in late medieval Montpellier. But these fiscal records mainly list men and I wanted to look at male and female names. So I’ve turned to another set of sources: notarial records, and more specifically, wills or testaments.

These are interesting sources for several reasons. First, I’ve collected over 1,200 wills from Montpellier and its backcountry (the diocese of Maguelone), which gives us an overview of the naming practices of an entire region, rather than just of a city. Second, women produced 40% of the wills collected, enabling a deeper understanding of gendered naming habits. Third, the wills span c. 1250-1500 and allow for a chronological approach that might – or not! – provide information on potential changes over time: what names were trending in the late thirteenth century, versus in the fifteenth. After a quick methodological overview, we’ll dive into the most common names men and women bore in the late southern French Middle Ages.

Wills were written down by notaries in Latin. So the names I’ve collected are in Latin. However, people from Montpellier and the Languedocian communities spoke Occitan, a local vernacular borrowing from French and Catalan. The local vernacular evolved over time. At the close of the fifteenth century, it was getting closer to Middle French while, in the thirteenth, it was much more Catalan. To translate the Latin names into the vernacular languages, I’ve used the local fiscal records (c. 1380-1480) which had been written in Occitan. So, for instance, a man named “Johannes” in a Latin will would have been called “Johan” in fiscal records. And a “Petrus” was a “Peyre”. At the very end of the fifteenth century, the vernacular could sometimes be “Jehan” or “Pierre,” a testimony to the greater French influence on the local language. Throughout the article, I’ll use the Occitan version of the names.

Another issue with medieval names is that spelling was not fixed in time, nor in usage. For example, the female name “Catherine” was spelled out quite differently, even within the same document. The same scribe or notary would alternatively spell it with an opening C or K (Catherine, Katherine), sometimes lose the H, and usually write it with a final A (Catherina, Caterina, Katherina, Katerina). Likewise, the name Alaysseta was spelled out in a wide variety of ways: Alayseta, Alayceta, Alaisseta, and so forth.  And, if some of these names do have modern-day equivalents (Peter/Pierre for Peyre, Catherine for Catherina), some names were very specific – not to say strange – and no longer exist today (like the female name Galharda – Gaillarde in Middle French – which literally mean a large and strong woman). Names like Gualharda / Gaillarde, or Dulcia / Douce (literally, “Soft”) were fairly common in the Middle Ages but have fallen out of use.

Let’s dive into the most common names!

The most common name for both men and women were Johan, Johanna and their derivatives, like Johanetta (Little Johanna) – the latter spelled in various different ways, with one or two Ns and one or two Ts. Over 250 years, one out of five men were named Johan (21%) and one out of ten women were called Johanna or Johannetta (12.5%).

The popularity of the name connects to the Christian fabric of Western European communities. St. John the Apostle was a familiar figure in the Middle Ages. While St. John was not a local saint, he nevertheless heavily influenced the naming practices of the time.

If boys were christened with the name Johan since the 1250s at the same rate as they would be at the end of the 1490s, the female name Johanna only gained in popularity from the 1300s onwards. More and more girls came to be named Johanna or Johannetta throughout the decades, up to 15% of them between 1450-1500.

Two very Christian names with which you can’t go wrong!

Maria and Marita (Little Maria), the second most common names for women, are directly inspired by the Virgin Mary, the mother of Jesus Christ in the New Testament. Petrus in Latin, Peyre in Occitan, Pierre in Middle and modern French, and Peter in English was the second most common name for men. St. Peter keeps the ‘Keys of Heaven’ and is a major figure in the Christian celestial court of saints.

Interestingly, Maria is also the name of the heiress of the Montpellier seigneurie who, in 1204, wedded the King of Aragon, Peter II. This couple also granted the community a charter of freedoms and the right to govern themselves through an elected consulate. It is possible that the popularity of these two names was connected to the community’s history.

Moreover, peyra in Occitan means stone, like “Pierre” in modern and middle French, with “peyrier” being the occupational title of the stonemasons. I found a few instances of stonemasons named Peyre, like Peyre Vayleri, a stonemason from Montpellier, who drafted his will in June 1463, and Peyre Borgonhon, also from Montpellier, who made his will in 1478. The latter was an important master of his craft and was hired by the city’s council to oversee several major projects of public interest.

Guilhem, sometimes Guilhermin, and Guilhema, sometimes Guilhemetta, were the third most common name for men and the second most common name for women in the late medieval diocese. About 10% of the men and 7% of the women were named Guilhem or Guilhema (or its derivatives). Guilhem is Guillaume in medieval and modern French, and William in English. There is no English equivalent for its female version but some French women (not many) are still called Guillemette.

Guilhem / Guilhema were very local names with local history. On the one hand, the city of Montpellier had been founded in 985 by the Guilhem family. Its lords were all named Guilhem and they ruled over the city until the early thirteenth century when Maria of Montpellier married Peter of Aragon. The prestige associated with the name Guilhem and the strong local history it conveyed certainly contributed to the great popularity of these two names. This prestige may have been enhanced by the presence of a local saint, St. Guilhem. Guilhem and Guilhema were given steadily to men and women throughout the centuries.

Here, we’ll look at rare names, which only show up once in our list containing over 1,200 people. Naming practices show great variety for women, with over 120 different first names identified in wills. For men, however, only 80 different names are attested in the same sources.

The stock of names given to medieval testators was much larger in the city (Montpellier) than in its backcountry. The reason is very likely the number of immigrants in Montpellier, compared to in rural communities. Foreigners to Montpellier were quite numerous in the aftermath of the Black Death and produced 40% of the wills recorded between 1400 and 1425. Many of the uncommon names identified in the documents were actually the names of foreign-born individuals. For instance, there was only one woman named Alix, a fairly common name in the northern areas of France. And, the female name Clara only shows up once in the documents, although it was quite popular at the time in other areas of the Mediterranean.

Here is a shortlist of some of these uncommon names. I’ve selected names that sound good to our modern ears and might inspire you to name a future child!

Naming practices had a strong local and regional component. Names that were very common in the south of France were not necessarily popular in the North. The Christian fabric of western medieval societies however meant that the most common names, regardless of their spelling, had a religious undertone.

See also: Girls’ Names from Medieval London (not the usual ones!)