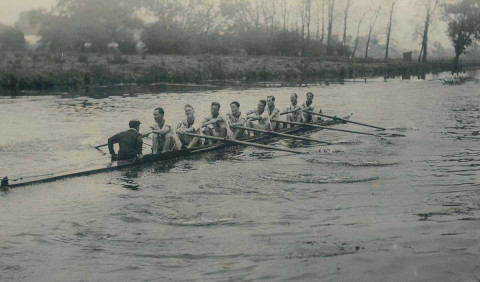 On 18 July 1850, a Thursday evening, domestic staff from Oxford and Cambridge universities sat down to dinner together at the Hoop Hotel to celebrate the first College Servants’ Boat Race, held earlier that day on the River Cam. Oxford were the victors, making the 80-mile journey by stage coach to Cambridge well worth their while. Both crews enjoyed the contest so much that just a few weeks later a rematch was held in Oxford. Again, Oxford won. It would be the start of a long tradition, with races held between the two rivals for a century.

This April sees the Boat Race return to London for the 167th men’s and 76th women’s events. The first Boat Race was held in 1829 between students from Oxford and Cambridge and is among the oldest amateur sports contests. Like their undergraduate counterparts, college servants (as college staff were referred to then) were rowing together from at least the 1820s.

Although many other employers encouraged and often provided workers with opportunities for athletic recreation during this period, colleges were different. College servants’ sports – which included rowing, athletics, bowls, cricket, football and tennis – were entirely self-organised. College employment afforded these workers access to equipment, sports fields and, in the case of rowing, use of the splendid college barges lining the banks of the Isis. The remaining costs associated with servants’ sports were typically funded by subscriptions, keeping these leisure activities affordable for most (male) workers – no provision was made for women.

College servants worked long hours in the academic terms, seven days a week. If their schedules had allowed any time for recreation, strict prohibitions on servants’ use of those amenities confined their athletic pursuits to the weeks when undergraduates and most dons were away from Oxford. The rhythm of the academic calendar worked in the servants’ favour and they enjoyed some of the best weather of the year – the Easter holidays and the Long Vacation in the summer months.

Colleges regularly employed both watermen and boatmen, who were foundational figures in the local rowing community. In addition, domestic staff from 21 colleges formed boat clubs which raced against each other regularly. The Oxford colleges of Christ Church, St John’s, Brasenose and Queen’s usually saw the largest number of oarsmen, but membership fluctuated from year to year. From these college clubs, crews were selected to represent the university as the Oxford College Servants’ Rowing Club. Mirroring national trends, rowing among college staff increased rapidly from the mid-19th century and remained popular well into the 20th century. Minutes from club meetings in the 1900s list between 80-100 active members.

The precise origins of the first servants’ race are difficult to pinpoint. However, newspaper accounts indicate that it came about in part as the result of a challenge made in jest by an Oxford undergraduate to a college servant. The first race was the highlight of a multi-day trip that also included a cricket match between the staff of the two universities, as well as organised entertainments including tours of colleges and museums and a celebratory joint dinner. In this, college staff preceded undergraduates, who did not hold a joint race dinner with Cambridge until 1876.

Details of the first race in July were reported widely and the August rematch held in Oxford was eagerly anticipated. Jackson’s Oxford Journal described how the second race took place at four o’clock in the afternoon, with ‘the banks of the river completely lined and the tops of house boats and every available place for witnessing the match taken possession of, at least 5,000 persons present to witness this race’.

In his speech at the second dinner, William Bacon, coxswain of the Oxford eight and a servant at Brasenose, thanked the undergraduates who had assisted in preparations for the race and cheered the servants’ boat to victory. This spirit of cooperation between undergraduates and servants reflected the important role college staff took in supporting undergraduate rowing, including coaching, maintaining equipment and, on occasion, rowing together. Servants travelled with undergraduate boats and crews to races, including Henley. But by the late 19th century their own participation in regattas was restricted, often by those same undergraduates.

Although rowing was not unusual in limiting the participation of working-class athletes by banning anyone who worked as a manual labourer, arguing that they had an unfair physical advantage, these restrictions persisted well into the 20th century, later than many other sports. These rules were originally intended to ban professional rowers and watermen from competing but by the 1880s the Amateur Rowing Association (ARA), whose membership was dominated by former university oarsmen keen to restrict the sport to ‘amateurs’, adopted a definition which became practically indistinguishable from ‘gentlemen’. These regulations were widely debated and, in 1890, a second organisation, the National Amateur Rowing Association, was founded to allow working-class participation. The ARA did not modify its restrictions until 1937 and in 1956 the two associations finally combined.

College servants wrote to these organisations and to the national sports press seeking clarification on their status – did a college porter who did very little manual labour, for example, count as a professional? Archival evidence suggests that the responses were confusing and it is no surprise that the servants’ Boat Race, which was free of the oversight of either national organisation, became the most important competition in their racing calendar, along with the Oxford Royal Regatta and the Easter Regatta. The third race was held in 1862 and then every two years, interrupted only by a fever outbreak in Cambridge in 1903 and by war, until the final race in 1950. Servants awarded themselves ‘Blues’ for these races and their special blazers and caps came from the same suppliers as the students’. Unlike the students’ Boat Race, however, Oxford led the servants’ series with a slight advantage over Cambridge.

Many of these oarsmen were also active in Oxford’s thriving tradition of club rowing which eventually replaced college-based clubs. In the Oxford city and university rowing community, many of these men are legendary for their skill and athleticism, a tradition that deserves to be recognised alongside the other Boat Race.