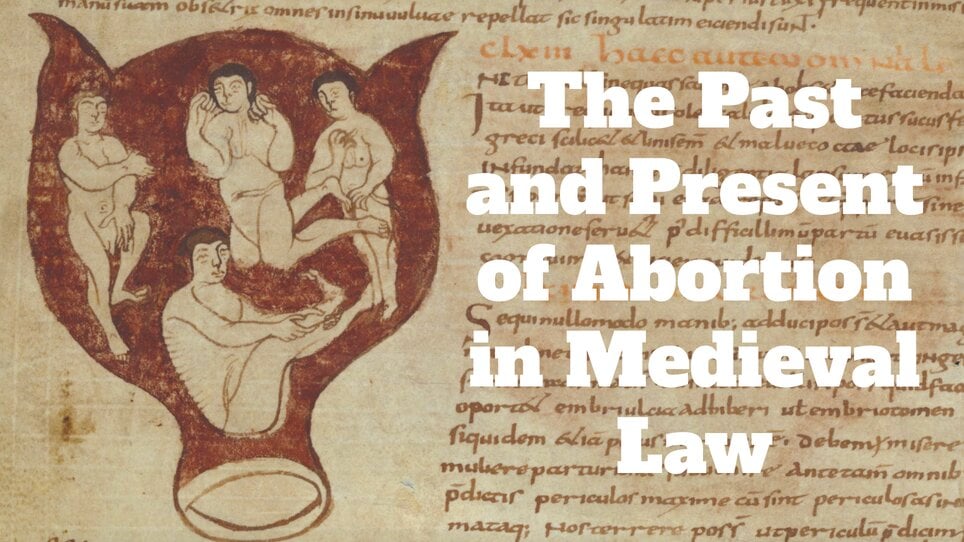 Abortion is once again in the spotlight in the United States, as its Supreme Court is set to strike down a law protecting this right. How do medieval laws and views on abortion play a role in this issue?

Justice Samuel Alito’s argument in the draft opinion in Dobbs v. Jackson Women’s Health Organization hinges, at least in part, on history: He argues, in the first two pages, Roe v. Wade “did not claim that American or the (pre-1776) common law had ever recognized such a right, and its survey of history ranged from the constitutionally irrelevant (e.g. its discussion of abortion in antiquity) to the plainly incorrect (e.g. its assertion that abortion was probably never a crime under the common law).” Like many other rights-expanding cases such as Loving v. Virginia and Griswold v. Connecticut, Roe was decided on the basis of the Fourteenth Amendment’s “equal protection” clause—and abortion, according to Alito, was illegal at any phase of pregnancy in three-quarters of the states at the time of the Fourteenth Amendment’s adoption.

Alito may be a judge, but he is not a historian, and it is up to historians to weigh the factual basis of such claims (see, for instance, the American Historical Association’s (AHA) amicus brief). As such – by Alito’s own originalist position – the entire legitimacy of the Dobbs decision rests in our hands. Since this is a medievalist website, I don’t want to delve too much into the American-law side of things; the New York Times did that sufficiently. It’s enough to note that, as Harry Blackmun correctly noted in the original Roe decision, the Comstock laws that forbade abortion were a historical blip, driven by a combination of consumer protection against dangerous patent drugs, male physicians defending their professional interests against female midwives and abortionists, racial eugenics, and Victorian moral panic. (Speaking of American history, though, we should also note that there’s another disturbing American precedent in some states’ anti-abortion laws forbidding telehealth services or the mailing of pills from out-of-state and allowing providers to be sued in state courts: Dred Scott sped the US Civil War by imposing Southern slave-catchers on Northern populations.)

Rather than American law, I want to deal with the “ancient” precedents—particularly the assertion that in “common law” (i.e., English law traditions from before 1776) abortion was tacitly allowed up to “quickening,” when the fetus began to move and kick. As the AHA brief notes, before this period, “common law did not even acknowledge a fetus as existing separately from a pregnant woman.” Pregnant women can generally feel their fetus move at around 18 weeks of gestation; in the Middle Ages, when women’s periods might be irregular for many reasons and recollections of when a sex act took place hazy, it was an incredibly subjective and personal measurement.

Medical texts were similarly vague: Aristotle, for instance, held that quickening took place at 40 days for male fetuses and 80 for female. And, since the line between pregnancy and a period that might have been missed for other reasons was vague, remedies to “restore the menses” before quickening – the same terminology used by the 19th century – abounded. No less an authority than the twelfth-century abbess Hildegard of Bingen provided recipes, as did Peter of Spain.

(Note that today, “viability,” the point before which 1992’s Casey decision holds that abortion ought to be legal in all circumstances, is considered to happen at 24 weeks.)

While some Church authorities did consider abortion at any stage a mortal sin, the twelfth-century Decretum written by Church lawyer Gratian declared “he is not a murderer who brings about abortion before the soul is in the body” (i.e., quickening). This idea of “quickening” was passed down into medieval and early modern English law, and was a distinctly medieval innovation: Roman law, as well as early Germanic law codes such as the Visigothic, Salic, and Bavarian, forbade abortion under harsh penalties. As with nineteenth-century bans, this was as much out of concern for the mother as for the fetus, since early medieval medical abortion was accounted dangerous. At the same time, as Roland Betancourt discusses, embryotomy – true “partial-birth” abortion, cutting apart a viable fetus so that the mother would not perish in childbirth – was seen as a necessary evil.

Carla Spivack does an excellent job of contextualizing and refuting arguments about the supposed illegality of abortion in early modern England. To summarize her claims: jurists’ concern was by and large for illicit sex, not abortion; the cases cited by those making an anti-choice case are for those who destroyed either newborns or fully-formed, “quickened” fetuses, and/or women who died from taking dangerous concoctions of herbs; the line between pregnancy and merely missing periods or having an abnormal growth was not well-defined; and herbal recipes for what is today called “medicine abortion,” which was conflated with restoring normal, healthy menstruation, were common and well-known. Further, a fetus in the early stages of development was not even considered to be human.

Spivack bolsters her case with numerous primary sources, as well as contextual analysis. Alfred the Great’s law code from the ninth century specifies that anyone who kills a pregnant woman would pay full wergeld for the woman and half for the child; the context of this is not the fetus’ personhood, but loss of property and reproductive services. Following contemporary theology, Henry I’s twelfth-century laws specify different penalties for abortion before and after quickening at forty days—three years of penance versus seven. This, however, was an ecclesiastical penalty for a moral crime—not a legal punishment for the act itself.

If we look to criminal law, the tremendously influential thirteenth-century jurist Henry of Bracton, who sought to systematize English common law, distinguished between pre- and post-quickened fetuses; for Bracton, destroying a fetus before quickening was not considered murder. The Tudor jurist William Stanford in his 1560 Les Plees del Coron and the Elizabethan Edward Coke in his Reports (published from 1600 to 1615), as well as the seventeenth-century Matthew Hale in his posthumous History of the Common Law in England, agreed with this reading, calling it a “misprision” (misdemeanor), not homicide. All three of these authors were known to America’s Founding Fathers, particularly Jefferson.

Another inarguable influence on American law, William Blackstone’s great commentary on English law published in 1765, picked up the thread: the law did not take an infant into consideration at all before it was able to “stir in the mother’s womb”; after quickening, it was a “a very heinous misdemeanor” to kill the child. In fact, though anti-choice writers such as Joseph Dellapenna cite criminal cases in which men were prosecuted for having caused miscarriages or stillbirths, as Spivack points out, this was for harm to the woman or to a quickened fetus – not damage to a pre-quickened pregnancy. Other sources cited by anti-choice camp include the Malleus Maleficarum, which charged witches with aborting fetuses through magic and herbs – though for the anti-choice camp to cite a witch-hunting manual seems apt.

In other words, quite to the contrary of what Alito alleges, there is absolutely no grounds in common law, which reaches back to medieval jurisprudence, to overturn Roe v. Wade. Making such an argument not only lays bare the purely political nature of the decision; by cherry-picking sources, it weakens the originalist school of Constitutional law as a whole.

See also: Birth Control and Abortion in the Middle Ages