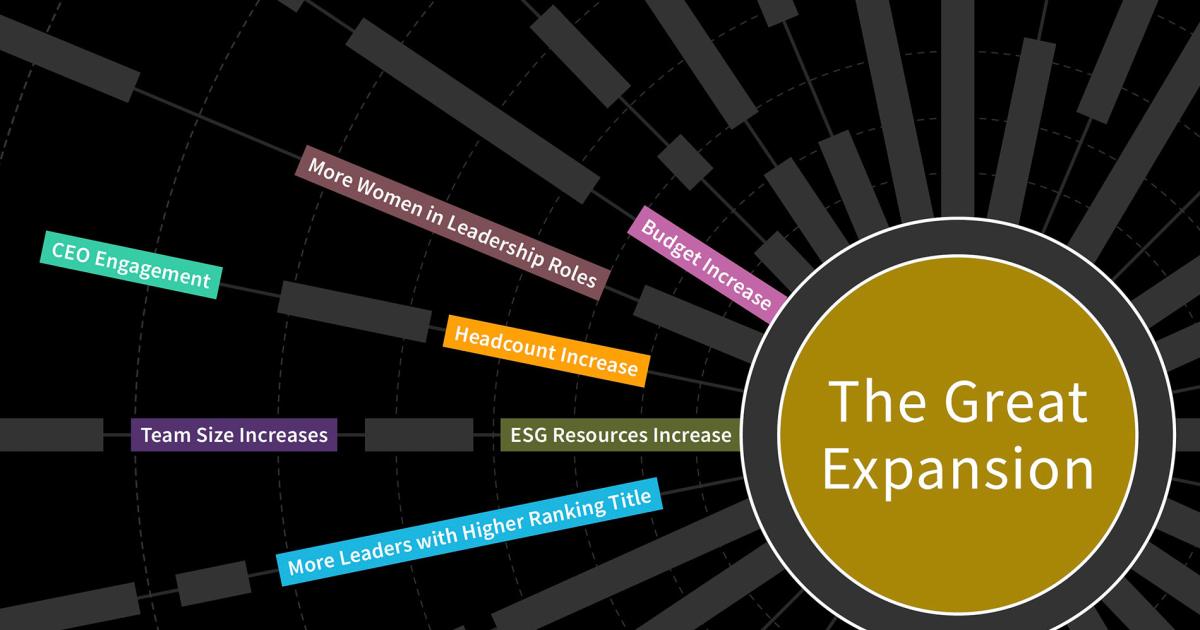 Sustainability professionals are thriving. That in itself is news.

When the 2008 recession came around, the sustainability function inside companies suffered as many positions were shed as part of cost-saving (euphemistically, “rightsizing”) measures. By the time the recession ended in 2010, only about one in four companies said they planned to add dedicated sustainability resources. A decade later, in 2020, that number had roughly doubled, to nearly six in 10 companies.

Today, 76 percent of respondents from large companies reported an increase in head count, an 18-point jump since 2019 — “a strong indicator of sustainability’s importance within the largest companies,” according to the latest “State of the Profession” report just published by GreenBiz Group.

The report tracks trends among sustainability professionals inside both large and smaller companies. This year’s report, the seventh biennial since 2010, is based on nearly 1,500 anonymous survey responses collected during November and December 2021 among members of the GreenBiz Intelligence Panel, with additional respondents reached through partnerships with Weinreb Group Sustainability Recruiting, Global Reporting Initiative and Environmental Defense Fund. Among survey respondents, 56 percent were employed by large organizations — those with revenues greater than $1 billion — and 81 percent of those live and work in the United States.

During the financial crisis, we saw sustainability teams take a real hit. We didn’t know if that was going to happen this time. But it’s definitely the opposite.

When the pandemic hit, it was a worrisome time for the profession. “During the financial crisis, we saw sustainability teams take a real hit,” GreenBiz VP and Senior Analyst John Davies, who conducted the research and wrote the report, told me. “We didn’t know if that was going to happen this time. But it’s definitely the opposite: Team sizes are bigger, more people are being hired and more people added ESG roles, something that we hadn’t asked about previously. It’s what we’re calling the Great Expansion.”

It’s not just head count that shot up. Three-fourths of respondents reported that their budgets had also increased, a 24-point jump from 2019, a year that itself had seen a 15-point increase over 2017. Gender diversity also improved as the number of women in sustainability leadership roles expanded by close to 20 percent since the first such survey in 2010. But racial diversity is lagging. “It’s still a primarily predominantly white profession,” said Davies.

The Great Expansion can be attributed in no small part to the increased consciousness among C-suite executives about climate and other pressing issues. Among the questions Davies has been asking since 2016 is for respondents to rate, on a scale from 1 to 7, how involved their CEO is in their company’s sustainability program. Previous reports saw minor increases in CEO interest and almost none openly dismissive. In the most recent survey, 60 percent rated CEO interest either a 7 (20 percent) or 6 (40 percent). Two years earlier, those numbers were 14 percent and 29 percent, respectively.

Some of that upturn is no doubt due to increased pressure by investors on ESG issues. CEOs, in turn, lean on their sustainability departments for help. The result: Fully half of larger companies — those with annual revenue over $1 billion — added staff or consultants due to this increased pressure, and 35 percent reported hiring more consultants.

Show me the money

All those stats aside, what lures thousands of readers to the “State of the Profession” report every two years is the data it offers on compensation, which we know anecdotally many professionals use as a benchmark when it comes time to negotiate salary increases.

In a nutshell: The average total compensation (base salary plus additional compensation such as bonus, exercised options, etc.) for sustainability managers is $146,900. For directors, it’s $227,158 and for vice presidents a whopping $404,972.

With 81 percent of respondents based in the United States, U.S. base salaries were higher for managers and directors (approximately $9,000 and $7,500 respectively) than those from other countries. The increased response rates for this year’s survey allowed us to explore regional differences in the U.S. as well. We separated California from the West and New York from the East and saw those two states pay managers significantly more than any other region. Managers in California averaged $150,961, and their counterparts in New York averaged $139,226. That’s between $10,000 and $30,000 more than elsewhere in the country.

Of course, these bounties aren’t evenly distributed. For example, at the director level, men average $180,646 while women make significantly less — $166,950. Female managers, on the other hand, make an average of $3,000 more than their male counterparts.

As Davies put it, referring to compensation: “It’s going gangbusters for a number of people.” But not all.