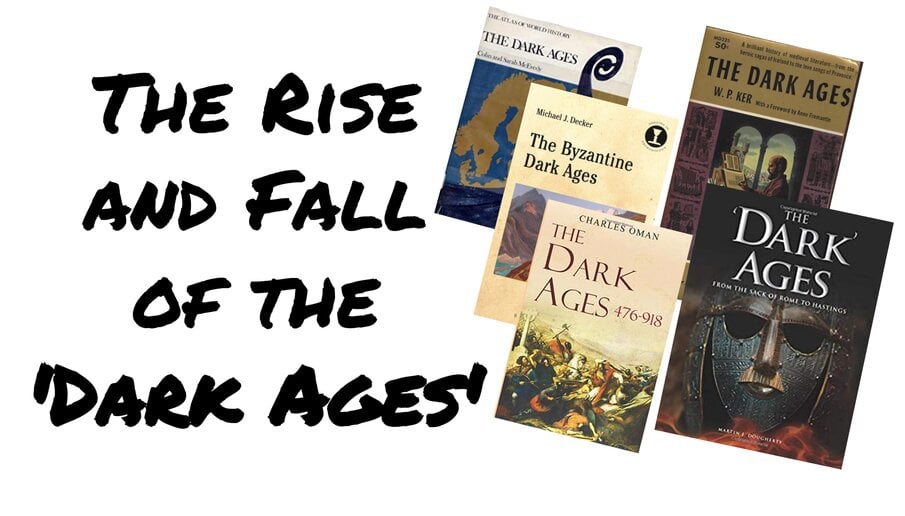 For five hundred years, the phrase ‘Dark Ages’ has allowed the living to signal their moral and intellectual superiority over those long dead and unable to reply.

The dead would seem to be a safe target, or at least one that can’t easily fight back. The phrase “Dark Ages” accuses those who lived long ago of not being too bright, and perhaps none too sanitary as well. Yet this phrase has become hotly contested in recent years.

When used by Reformers of the 17th century, it meant that the papacy had concealed Christian truth during the Middle Ages (500-1500). Later, it was used to suggest that human progress had halted for a thousand years, a catastrophe that could be blamed on an excess of religion. In the 20th century, it was defined as a period of decline that followed the fall of the Western Roman Empire in 476.

“The term “Dark Ages” is now rarely used by historians because of the value judgment it implies,” according to Encyclopædia Britannica. In the last thirty years, scholars have embraced alternatives such as “Late Antiquity,” “Migration Period” and “Early Middle Ages.”

During the Reformation, Protestants accused the Catholic Church of having concealed true Christian doctrine during the Middle Ages. For example, Anglican theologian Richard Sibbes asked in 1620, “What is the reason that former times were called a dark times, the times of Popery, a dark age?” In 1624, Archbishop George Abbot of Canterbury spoke of, “the gloomy dark Ages before Luther.” Abbot would go on to be the lead translator for the King James Version of the Bible.

The phrase “Dark Ages,” or an equivalent, is far more common in English and in Scandinavian languages than it is in the language of any Catholic country. The French and Italian phrases equivalent to Dark Ages (Fr. âges obscurs, It. secoli bui) appeared here and there, but were never mainstream or used as period names (Gautier). In the post-war period, usage shifted from Early Middle Ages (Fr. début du moyen âge, It. Alto Medioevo) to Late Antiquity (Fr. antiquité tardive, It. tarda antichità). This Catholic/Protestant divide suggests that the origin of the phrase is sectarian.

Perhaps the best-known essay on the Dark Ages is “Petrarch’s Conception of the Dark Ages,” written in 1942 by German historian Theodor Mommsen. Mommsen does not provide an example of usage by Petrarch (l. 1304 – 1374), but he does cite this passage:

Amidst the errors there shone forth men of genius; no less keen were their eyes, although they were surrounded by darkness and dense gloom.

The view that the term reflects attitudes of the Italian Renaissance is hard to square with the fact that the phrase almost never appeared in Italian prior to the 1960s.

Was there a decline?

A variety of metrics show that Europe was wealthier in classical times than it was in the post-Roman period:

Although 476 is one the best-remembered dates in history, nothing of outstanding importance happened in this year. It was the year that Odoacer (r. 476-493) ousted puppet Emperor Romulus Augustulus and named himself Italy’s first king. The Ostrogoths ruled Italy as the Romans under new management until the country was ruined by the Byzantine-Gothic War (535 to 554). In Byzantium, Emperor Justinian continued to rule in much the Roman way, producing outstanding monuments as well as the standard compilation of Roman law. Cataclysm hit during the Byzantine-Sassinian War of 602–628 and a “Byzantine Dark Age” followed.

Did the ‘Dark Ages’ really set human progress back by a thousand years? Beginning around 800, land was divided into strips for ease of plowing and a three-field system was introduced. This represented a decisive advance compared to classical agriculture. Despite the loss of Egypt and North Africa, the agricultural output of the Byzantine Empire increased with the growth of animal husbandry.

The twelfth century featured the advent of Gothic architecture, universities, and a revival of classical science, as documented by Charles Homer Haskins in The Renaissance of the Twelfth Century.

The Enlightenment and Romanticism

The enlightened eighteenth century idealized the philosophers and artists of ancient Rome while viewing the invading Goths and Vandals as villains. The Middle Ages were still dark, but no longer because the pope was thought to be promoting a false version of Christianity.

The Romantics of the nineteenth century held a more positive view of the medieval past. Walter Scott’s Ivanhoe: A Romance (1819) helped popularize chivalry. There was also a revival of Gothic architecture. A hero like Arthur, Alfred, or Charlemagne became all the more heroic when portrayed as battling the forces of civilizational decline. Usage of the term Dark Ages peaked around 1850. While French and Italian historians still spoke of “barbarian invasions,” the English starting referring to “migrations,” and the Germans to a “wandering of peoples” (Völkerwanderungen) that injected energy into a decadent empire and founded the modern nations of Western Europe.

Reformers, writers of the Enlightenment, and Romantics all agreed that the ‘Dark Ages’ and the ‘Middle Ages’ were two names for the same thing. Charles Oman’s The Dark Ages 476-918 A.D (1893) and W.P. Ker’s The Dark Ages (1904) argued that the meaning of the word should be restricted to the Early Middle Ages (500-1000). The acceptance of chivalry and Gothic architecture showed that the public no longer viewed the culture of the High Middle Ages (1000 to 1250) as backward, Ker wrote. He added that for the years 500 to 1100, the primary sources are in Germanic languages, while Latin and Latin-based languages are more prominent in the High Middle Ages. Therefore, Ker argued, dividing the period was a natural solution. Encyclopædia Britannica and other major reference works have followed this advice.

Since the publication of The World of Late Antiquity by Peter Brown in 1971, historians have gradually turned against both the term Dark Ages and the idea of civilizational decline. Brown defines Late Antiquity as 150 to 750, placing the narrative focus on the traces of antiquity that survived.

Many historians have abandoned traditional decline-and-fall terminology in favor of nonjudgmental phrases, a trend decried by historian Bryan Ward-Perkins of Oxford University in The Fall of Rome (2006). They longer use words like “crisis” or “decline” to describe the post-Roman world, but rather “transition,” “change” and “transformation.” Yet the mass archaeological evidence, according to Ward-Perkins, supports the view that there was a dramatic decline in standards of living from the fifth to seventh centuries.

While the Romantics saw the societal decline as a challenge for the hero to overcome, today’s historians often treat the word ‘Dark Ages’ as a slur. There have been dozens of “debunkings” over the years. The latest example is The Bright Ages by Matthew Gabriele and David M. Perry. They note that those who continue to use the term are complicit in the “depictions of sexism, rape, and torture” found in such shows as Game of Thrones and The History Channel’s The Vikings.

Game of Thrones is an image that leaps to mind when the term ‘Dark Ages’ is used. The struggle between the Lennisters and the Starks echoes that of England’s houses of York and Lancaster during the War of the Roses (1455 -1485). The scheming Cersei can be compared to Margaret of Anjou, wife of Henry VI. Ned Stark’s head is displayed on a pike, much like that of Richard of York after he was killed in the Battle of Wakefield in 1460. For the most part, the show is pure fantasy with dragons, ice zombies, unpredictable seasons, and other elements that have no basis in the history of any period.

With a television series based on Bernard Cornwell’s Winter King in development by Epix, the post-modern Dark Ages may have to compete with a Romantic view. The novels were hugely popular when they came out in 1995 to 1997. They feature Arthur presiding over a decaying post-Roman Britain. “In the Dark Ages a legendary warrior struggles to unite Britain,” as the blurb puts it.

Trends for the future

“Modern scholars cringe at any reference to the term ‘Dark Ages,’” according to a 2021 book review in the New York Times. “Late Antiquity” is the academically favored term nowadays, with usage growing at an explosive rate. But The History Channel has yet to follow up its series on The Dark Ages with one entitled Late Antiquity. ‘Dark Ages’ is certainly the term that the general public is most familiar with, beating the competition on Google Trends. The rise of the new term has not come at the expense of older ones. The usage of “Dark Ages” on Google ngram has rebounded to a level not seen since the 1950s. In the past, specialists have tried replacing “buffalo” with “bison” and “brontosaurus” with “apatosaurus” without much success. Usage for apatosaurus peaked in 2001, according to ngram. They’ve got an uphill fight this time around.

Peter Kauffner has worked as a teacher and as a newspaper reporter in the United States, Vietnam, and Hong Kong.

Perrin, Jean Paul, and Abbot, George (1624). A Treatise of the Perpetuall Visibilitie and Succession of the True Church in all Ages. Augustine Matthewe and John Norton for Robert Miloyrne.

Sibbes, Richard (1620). “A Description of Christ”. The Bruised Reed and Smoking Flax. Philadelphia: Presbyterian Board of Publication.

Ward-Perkins, Bryan, The Fall of Rome and the End of Civilization, Oxford University Press, 2006