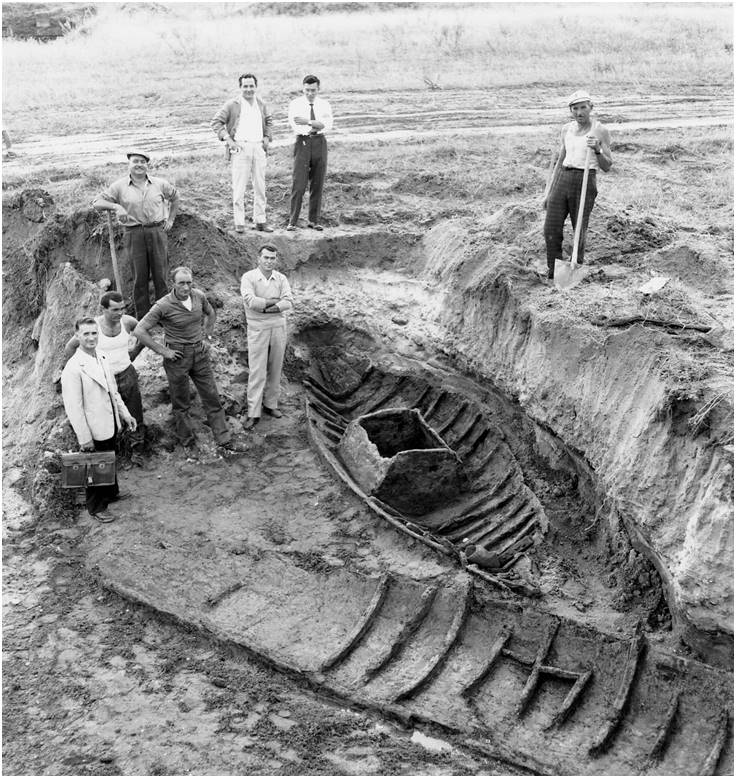 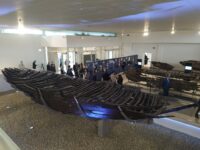 The Museum of the Ships of Fiumicino is home to the remains of five Roman ships from the imperial era that were discovered during construction of the Leonardo da Vinci International Airport in the 1950s and 60s. It is one of the most important discoveries ever made as regards Roman civilian naval technology, and an invaluable source of information on imperial shipbuilding.

The ships are of three different types. Ships Fiumicino 1-3 are caudicarii, barges with flat bottoms and high sides that were used as transport vehicles on the canals and lagoons linking the sea at Portus inland to the Tiber and on to Rome. They played a vital role as the primary modes of transport of people and merchandise from the port to the Eternal City.

For the principal waterway servicing the capital of a vast empire, the Tiber is not very accommodating. It is shallow, winding, floods in the rainy season and churns with treacherous currents and rocky shoals. These barges had to be towed with ropes by pulling crews on the river bank to reach Rome’s main inner port in what is now the Testaccio neighborhood. Fully laden at its 70-ton capacity, the largest of the caudicarii would have taken three days to travel the 20 miles from sea to city.

The fourth is a sea-going vessel. It is small with a 4-5 ton capacity, and was likely used for commerce rather than longer voyages in the open sea. It may have been small, but was extraordinarily well-made, from the design to the execution. It has a streamlined hydrodynamic design and was expertly crafted from high-quality materials. It was highly maneuverable 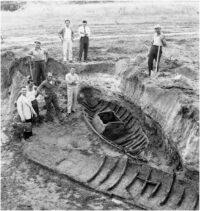 Fiumicino Five is a fishing boat, navis vivara, a modest little rowboat  that is unique in the world. It is in an excellent state of preservation, the hull almost complete. What makes it one of a kind is that it still contains the wooden well the fisherman would use to hold his catch alive before heading to shore at the end a day’s fishing. The square well was built in the middle of the boat consisted of four wooden walls inclined slightly inward centered over the keel. Holes on either side of the keel could be unplugged to ensure the exchange of water for the catch no matter how long the work day. The pine plugs are still present. The well could hold about 80 gallons of water.

Sea fish were a luxury food, sold for high prices to the homes of the rich and aristocratic in Rome. Fresh water wish were the staples of the budget-conscious diet. A fisherman who could deliver his catch still living to the markets of Rome would make good money for his trouble.

The boats were discovered during the construction of the Leonardo da Vinci Airport in the 1950s and 60s. Excavations unearthed structures from the Roman port and, between 1958 and 1965, five ships in close proximity to each other. The ships were conserved inside a wooden hangar built at the find site ensuring the fragile wood vessels would be preserved for eventual public display within the confines of the ancient port basin built and expanded by Claudius and Trajan. The hangar became the Museum of the Ships of Fiumicino in 1979.

Structural problems forced the museum’s closure in 2002, and kept it closed for almost 20 years. The museum recently completed an extensive renovation program and reopened its doors in October 2021. It certainly could not be more conveniently located for visitors flying into Rome. You can literally see the airport a few hundred feet away from the museum windows. Two minutes on an airport shuttle, and you can while away a layover exploring ancient Roman modes of transportation.