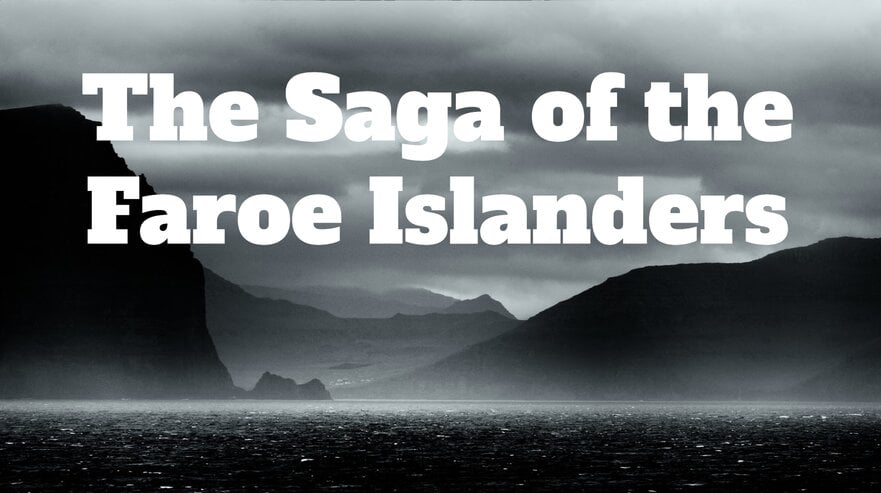 Ever since reading The Saga of the Faroe Islanders I felt that it has the makings of a great Tarantino film. If the director is still looking for material for what will be his tenth and final film as director he should definitely consider this saga. While it is violent, it is also surprising, with the main hero unceremoniously killed halfway through the plot, and another main villain who turns hero only to once again turn villain.

While the sagas of Icelanders excel at ambiguity The Saga of the Faroe Islanders leaves the reader with some haunting images that remain unresolved in the text. Like in a Tarantino film, by the end of the saga you are not sure if good has vanquished evil, if the author is actually critical of the problematic worldview presented by its characters, and if things couldn‘t have ended differently if we could all just get along. Also, expect a bloodbath.

The saga, written in 13th-century Iceland, starts with a dispute between kinsmen over control of the Faroe Islands that leads to a violent ambush. Things get weird quickly, though, when the two brothers who were set up as heroes die, alongside Hafgrímr, who until that point was established as the saga‘s villain. Faced with the two young sons of the deceased heroes, Thrand (Þrándr) suggests killing them. When his co-conspirator is appalled by the suggestion Thrand acts like this wasn‘t a serious suggestion. He then promises to foster the two children as compensation, but instead sells them into slavery. The story of Thrand is like a typical Tarantino villain, for he is compelling, more interesting than the good guys, and has the best lines.

I‘ll not trouble you here with the intricacies of the plot – true to Icelandic saga style these are better experienced than described – but I do want to focus on some twists and turns that made me think of Tarantino, and why it would be an ideal addition to his film repertoire. The two children that Thrand very reluctantly spared grow up to be the picture-perfect heroes Sigmund (Sigmundr) and his sidekick cousin Thorir (Þórir). They grow up in Norway and arrive back in the Faroe Islands with vengeance on their minds. After a long back and forth battle with Thrand, the two cousins swim away from a dangerous battle.

Whoever swam (or put a toe) in the North Sea knows one thing about it; it’s very cold, and its waters are quite turbulent and challenging. So, understandably, Thorir ends up drowning, while Sigmund arrives on the shore barely alive, only to be found by the almost ridiculously named Thorgrim the Bad (Þorgrímr illi) and his sons, who end up killing him for the ring on his finger.

A few days ago I had a conversation with fellow Old Norse scholar Arngrímur Vídalín who described the scene like this (I’m paraphrasing here): “The hero of the saga gets whacked for the silliest reason, and then Thrand, shocked by how dishonorable his nemesis Sigmund’s death was, puts on this weird séance show and reveals that it was Thorgrim the Bad (what’s up with his name?) that killed him, and then has him executed because he’s annoyed that he didn’t get to kill Sigmund himself.”

The fact that this killing happens almost halfway through the saga gives us an opportunity to see how the Faroe Islands fare under Thrand’s rule, which, to put it mildly, is unpleasant. Next, King Olaf the Saint (Óláfr helgi) tries to collect tribute from the island. Thrand goads his violent nephews to assassinate one of these tax collectors, the son of the dead hero Sigmund; in true Tarantino form, this is done when the poor fellow is on his way to relieve himself. Things go sideways quickly, though, and the nephews start to solve everything with violence, killing several of the king’s tax collectors.

Eventually, the nephews go to the farmstead of Thorhall the Rich (Þórhallr inn auðgi), where Thorhall’s wife has long intimate conversations with the foremost of the nephews, Sigurd (Sigurðr). Eventually, Thorhall is killed, but in a mysterious way; he is stabbed with a thin blade under his left arm – the killer’s identity is not clear. Sigurd finds someone to pin the blame on and kill, takes over the household and marries Thorhall’s wife. Gaut the Red (Gautr inn rauði) soullessly kills the head of another household and marries his wife. This taking over of someone’s household might remind you of the Manson family in Tarantino’s Once Upon a Time in Hollywood.  The third nephew Thord (Þórðr) then tries to marry the widow of Sigmund – the hero that died through the machinations of his uncle Thrand. This leads to the death of the nephews, and as a result Thrand also dies from heartbreak.

This plot could clearly be adapted into a crime thriller set in the late Viking Age. Definitely something that Tarantino could turn into storytelling gold! It even fits with his fondness of disjointed narratives: The Saga of the Faroe Islanders is in fact a saga reconstructed in the nineteenth century, since it does not exist as a whole piece in the extant medieval manuscripts. (If you want to troll a scholar who likes this saga, tell them that it never actually existed and see how they react. From experience; it is hilarious.)

To learn more on this understudied saga, Andreas Schmidt is the current leading authority on all things related to The Saga of the Faroe Islanders, so I highly recommend reading his stuff. If you know Dutch, check out Simon Halink’s piece comparing Thrand (Tróndur) with Redbad. If Danish is your language, see Andras Mortensen’s piece discussing the saga as a historical source.

Dr. Yoav Tirosh will soon begin a postdoc on disability in the sagas of Icelanders at the Centre for Disability Studies at the University of Iceland. He is also an external member of CVM (Center for Vikingetid og Middelalder) at Aarhus University. He creates the Viking Comics by Yoav webcomic about life in Iceland and Vikings. You can learn more about his comics on Instagram, Facebook, or Twitter @RealMundiRiki.