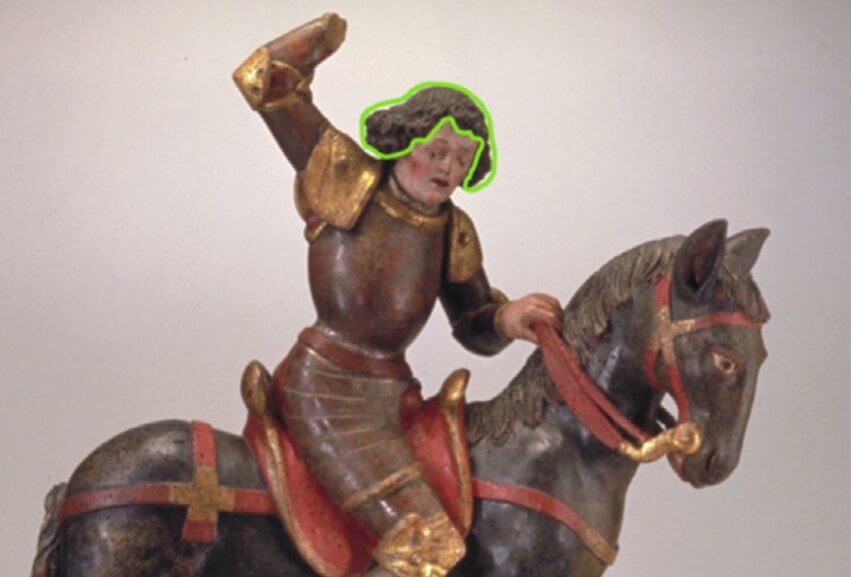 Last year researchers revealed that medieval artisans were somehow able to make use of a form of nanotechnology to create an ultra-thin metal known as Zwischgold. Now new scans of medieval artifacts have helped to determine how this was done.

Zwischgold is a metal foil made from gold and silver that was made in Germany and Switzerland as early as the 13th century. It was used in small amounts for artworks such as sculptures, paintings and manuscript illustrations. A previous study found something very remarkable about this foil – it was incredibly thin, with a thickness of between 50 and 260 nanometres (nm). To understand how thin this really is, the width of a single human hair is between 80,000 and 100,000 nanometres.

To understand more about Zwischgold, scientists at the Paul Scherrer Institute (PSI) created nanoscale 3D images of this material. Minute samples of it were taken from an altar and wooden statues originating from the fifteenth century. The altar is thought to have been made around 1420 in Southern Germany and at its centre is a depiction of the Virgin Mary cradling Baby Jesus. The sample was taken from a fold in Mary’s robe. The other samples came from medieval items held by Basel Historical Museum.

“Although Zwischgold was frequently used in the Middle Ages, very little was known about this material up to now,” says PSI physicist Benjamin Watts. “So we wanted to investigate the samples using 3D technology which can visualise extremely fine details.”

Although other microscopy techniques had been used previously to examine Zwischgold, they only provided a 2D cross-section through the material. In other words, it was only possible to view the surface of the cut segment, rather than looking inside the material. The scientists were also worried that cutting through it may have changed the structure of the sample. The advanced microscopy imaging method used today, ptychographic tomography, provides a 3D image of Zwischgold’s exact composition for the first time.

The PSI scientists conducted their research using X-rays produced by the Swiss Light Source SLS. These produce tomographs displaying details in the nanoscale range – millionths of a millimetre. “Ptychography is a fairly sophisticated method, as there is no objective lens that forms an image directly on the detector,” Watts explains. Ptychography actually produces a diffraction pattern of the illuminated area, in other words an image with points of differing intensity. By manipulating the sample in a precisely defined manner, it is possible to generate hundreds of overlapping diffraction patterns. “We can then combine these diffraction patterns like a sort of giant Sudoku puzzle and work out what the original image looked like,” says the physicist. A set of ptychographic images taken from different directions can be combined to create a 3D tomogram.

The advantage of this method is its extremely high resolution. “We knew the thickness of the Zwischgold sample taken from Mary was of the order of hundreds of nanometres,” Watts explains. “So we had to be able to reveal even tinier details.” The scientists achieved this using ptychographic tomography, as they report in their latest article in the journal Nanoscale.

“The 3D images clearly show how thinly and evenly the gold layer is over the silver base layer,” says Qing Wu, lead author of the publication and an art historian at the Cologne Institute of Conservation Services. “Many people had assumed that technology in the Middle Ages was not particularly advanced. On the contrary: this was not the Dark Ages, but a period when metallurgy and gilding techniques were incredibly well developed.”

Unfortunately there are no records of how Zwischgold was produced at the time. “We reckon the artisans kept their recipe secret,” notes Wu. Based on nanoscale images and documents from later epochs, however, the art historian now knows the method used in the 15th century: first the gold and the silver were hammered separately to produce thin foils, whereby the gold film had to be much thinner than the silver. Then the two metal foils were worked on together, a complicated procedure that required highly skilled specialists. “This required special beating tools and pouches with various inserts made of different materials into which the foils were inserted,” Wu explains.

“Our investigations of Zwischgold samples showed the average thickness of the gold layer to be around 30 nanometres, while gold leaf produced in the same period and region was approximately 140 nanometres thick,” Wu continues. “This method saved on gold, which was much more expensive.”

At the same time, there was also a very strict hierarchy of materials: gold leaf was used to make the halo of one figure, for example, while Zwischgold was used for the robe. Because this material has less of a sheen, the artists often used it to colour the hair or beards of their statues. “It is incredible how someone with only hand tools was able to craft such nanoscale material,” Watts adds.

The 3D images do bring to light one drawback of using Zwischgold, however: the silver can push through the gold layer and cover it. The silver moves surprisingly quickly – even at room temperature. Within days, a thin silver coating covers the gold completely. At the surface the silver comes into contact with water and sulphur in the air, and corrodes. “This makes the gold surface of the Zwischgold turn black over time,” Watts explains. “The only thing you can do about this is to seal the surface with a varnish so the sulphur does not attack the silver and form silver sulphide.”

The artisans using Zwischgold were aware of this problem from the start. They used resin, glue or other organic substances as a varnish. “But over hundreds of years this protective layer has decomposed, allowing corrosion to continue,” states Wu.

The corrosion also encourages more and more silver to migrate to the surface, creating a gap below the Zwischgold. “We were surprised how clearly this gap under the metal layer could be seen,” says Watts. Especially in the sample taken from Mary’s robe, the Zwischgold had clearly come away from the base layer. “This gap can cause mechanical instability, and we expect that in some cases it is only the protective coating over the Zwischgold that is holding the metal foil in place,” Wu warns.

This is a massive problem for the restoration of historical artefacts, as the silver sulphide has become embedded in the varnish layer or even further down. “If we remove the unsightly products of corrosion, the varnish layer will also fall away and we will lose everything,” says Wu. She hopes it will be possible in future to develop a special material that can be used to fill the gap and keep the Zwischgold attached. “Using ptychographic tomography, we could check how well such a consolidation material would perform its task,” says the art historian.