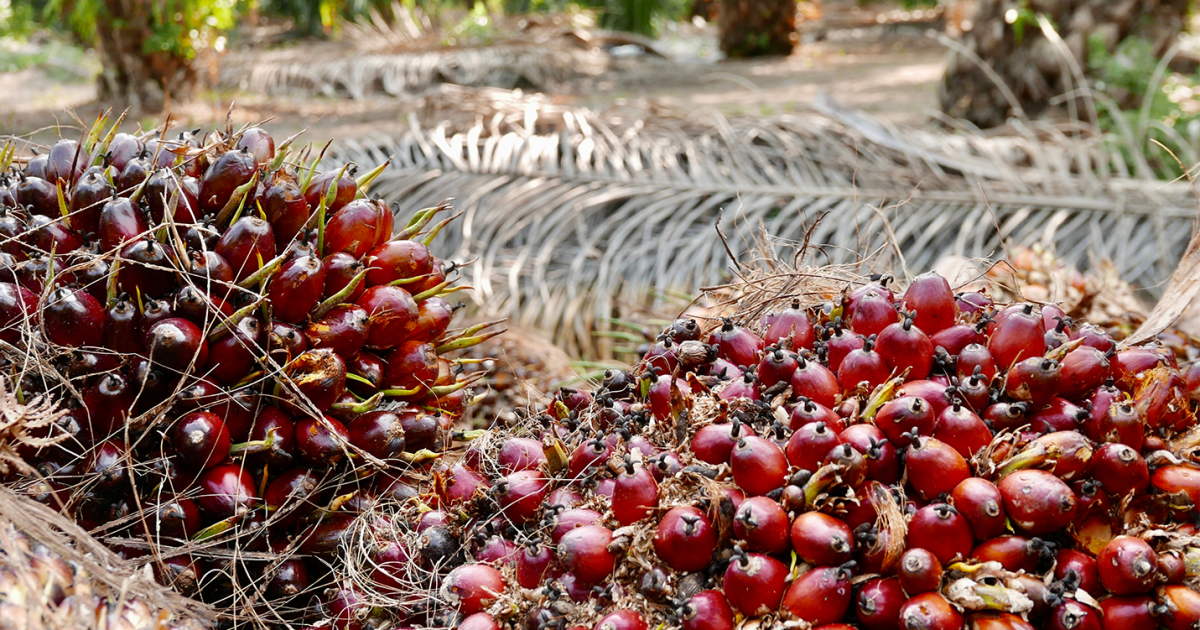 Tom Jeffries and Tom Kelleher met at Rutgers University in the 1970s while studying industrially useful microbes. Jeffries went on to run a yeast genomics program at the U.S. Department of Agriculture; Kelleher spent decades in the biomedical industry, working with biologics such as insulin, which are produced by genetically modified microbes in giant, fermenting vats. In 2007, the two reunited to build a company on the back of a grant from the National Science Foundation. Called Xylome, the Wisconsin-based startup aimed to find better methods to produce low-carbon fuel by feeding yeast agricultural waste.

Yet it was by accident that Jeffries and Kelleher turned their efforts a few years later to a different global environmental problem: palm oil.

The world’s cheapest and most widely used vegetable oil, palm oil production is a primary driver of deforestation and biodiversity loss in the tropics. These and other problems with the palm oil industry, such as exploitative labor practices, have for years driven interest in more sustainable options. But good alternatives have proven difficult to come by: Other vegetable oils have similar drawbacks to palm oil, and sustainable forestry practices are not always effective in the face of rising demand. Today, the world consumes nearly 70 million metric tons of palm oil each year, used in everything from toothpaste and oat milk to biodiesel and laundry detergent. Demand is expected to more than double by 2050.

But with advances in bioengineering and increasing concerns about sustainability, a number of companies like Xylome have developed microbial oils they say could offer an alternative to palm oil while avoiding its most destructive impacts. They join numerous other synthetic biology companies — from ventures hawking new biofuels and fertilizer to lab-grown meat — that aspire to solve environmental problems but share similar challenges scaling up production and demonstrating their approach is in fact more sustainable than the problem they’re trying to solve.

The world consumes nearly 70 million metric tons of palm oil each year, used in everything from toothpaste and oat milk to biodiesel and laundry detergent.

Last year, a startup called C16 Biosciences opened a gleaming new lab in Manhattan to develop a microbial palm oil alternative, backed by $20 million from Bill Gates’ climate solutions investment fund Breakthrough Energy Ventures. A California-based startup called Kiverdi is also working to manufacture yeast oil using carbon captured from the atmosphere, and a team of bioengineers at the University of Bath is at work scaling up its own strain of oily yeast. Xylome recently sent the first batches of its palm oil alternative — called “Yoil” — to a number of large palm oil suppliers and the FDA for testing.

Although enormous challenges exist to scaling up production at a cost that can compete with cultivated palm oil, and questions remain about how an emergent biotech industry in the Global North might affect palm oil-based livelihoods in the Global South, these microbial oils could help curb the relentless growth of oil palm, which threatens biodiverse areas along frontiers in South and Southeast Asia, Africa and Central America. If yeast oils can achieve a price low enough to compete with the trees (a big if), “that would make a huge difference in where palm oil comes from,” said Kelleher, now Xylome’s CEO. “It would all be microbial at that point.”

Over Zoom, Kelleher showed off a bluish photo of Xylome’s proprietary yeast strain, developed from an oil-producing species called Lipomyces starkeyi. Through the microscope, the yeast resembled dish soap suds. “You’re looking at yeast which are literally squashed,” he said. “They’re crushed to the outside wall because of the amount of oil produced in these yeasts.” Fed on corn syrup, the genetically altered strain is capable of giving over most of its total weight to lipids. “They do exactly what we do if we keep feeding ourselves sugar,” said Kelleher. “They get big.”

In 2013, Jeffries, now Xylome’s president, noticed the oil from this strain was remarkably similar to palm oil, which is prized for its distinctive blend of saturated and unsaturated fats. This blend is solid at room temperature and liquid at body temperature, perfect for chocolate coatings, soaps and cosmetics. Other parts of the versatile palm oil are used as fuels, solvents, lubricants and in many other products, especially in China, India and Indonesia.

The resemblance of the yeast oil to palm oil was discovered by chance — Xylome was going for diesel. But Jeffries and Kelleher realized there might be something to a palm oil alternative when Kelleher’s daughter told him about the growing interest in palm oil-free cosmetics to address environmental concerns identified by years of international activism targeting unsustainable palm oil.

Although palm oil production is responsible for less than 1 percent of deforestation globally, according a 2018 report from the International Union for Conservation of Nature, it is a major cause of deforestation in the tropics. In Borneo, for instance, oil palm cultivation has accounted for more than half of all deforestation over the past two decades. Future demand could contribute to even more deforestation. The same report found that more than 1 million square miles of biodiversity hotspots could be threatened by oil palm cultivation, potentially affecting more than 40 percent of all threatened bird, mammal and amphibian species, from orangutans and tigers to flycatchers and elephants. This deforestation also creates greenhouse gas emissions, as carbon-rich peat built up beneath virgin forests is drained, and trees are burned to clear land for planting.

Deforestation creates greenhouse gas emissions, as carbon-rich peat built up beneath virgin forests is drained, and trees are burned to clear land for planting.

Recognizing these impacts, suppliers — working through organizations such as the Roundtable on Sustainable Palm Oil (RSPO), which has certified palm oil supply chains since 2007 — have sought ways to increase oversight of palm oil production to ensure crops are not cultivated on biodiverse or carbon-rich land. While a growing number of palm growers are certified, the approach has limitations, said Janice Lee, an environmental scientist who studies palm oil at Nanyang Technological University in Singapore. For instance, it can be difficult to certify smallholder growers, who collectively represent most palm oil production in some regions. “Certification is not a silver bullet,” she said. About 20 percent of palm oil production is certified by RSPO.

Finding an alternative to palm oil has proven even more challenging. Other tropical oils — such as coconut oil — have lower yields than oil palm and would have even greater impacts if cultivated on the same scale. Other non-tropical oils — such as soy or corn oil — can be grown outside the biodiverse tropics, but they require additional processing to replace palm oil in many applications. That processing is expensive and produces trans fats, which the FDA banned in the United States in 2015.

Kelleher and Jeffries decided to market their yeast as a better alternative. The microbes in their lab produce an oil with a lipid profile almost identical to palm oil. The “bugs,” as they refer to the yeast, can also be fed with materials that don’t require tropical agriculture, such as corn or sugar cane, or waste materials, such as corn husks and wheat stalks, which could substantially reduce production costs. The microbial oils could also be produced anywhere, reducing the distance between factory and consumer.

The challenge has been getting the yeast to juice out oils at a scale and price that can compete with conventional agriculture — and to do it quickly enough to curb destructive oil palm development.

Advances in technology could help. In its Manhattan lab, C16 Biosciences is optimizing conditions to keep its genetically modified yeast strains happy. Christopher Chuck, a chemical engineer with the University of Bath team, is also working on more productive yeast strains, but rather than modify the microbes with gene-editing tools, his team relies on a process of directed evolution. This involves exposing yeast colonies to a regimen of stresses to spur them to produce more oil from cheaper feedstocks. Chuck said this approach can lead to more robust microbes; it also avoids the regulations that govern genetically modified organisms.

Xylome, which owns patents on methods of genetically modifying the yeast species Lipomyces starkeyi, is working to increase the yield of its corn sugar-fed strain. Another strain in development can be fed waste products from ethanol production to produce oil, which Kelleher claims could eventually produce an oil at half the current price of raw Malaysian palm oil. Decades of past research on using such fibrous, “cellulosic” feedstocks for biofuel has shown this to be an elusive target, but Kelleher and Jeffries are confident the company can get this approach to work. “The cellulosics are going to eventually prevail,” said Jeffries.

The University of Bath team is also working on more productive yeast strains, but rather than modify the microbes with gene-editing tools, his team relies on a process of directed evolution.

Jeffrey Linger, a bioengineer at the National Renewable Energy Laboratory, commented that development of such microbial oil alternatives is worth pursuing, although he thinks these companies have a difficult path ahead to develop workable strains that can be manufactured at large scale and that can use cellulosic feedstocks. “There are so many knobs you can turn, so I don’t want to say it’s impossible,” he said. “I also don’t want to say it’s easy.”

Even with improved strains, there are limits to how far the microbes can be pushed. In a “limits-of-science” model, Chuck’s group envisioned a way microbial oils might reach price parity with palm oil in the future. They found that even in an ideal scenario, microbial oils would still be more expensive than cultivated palm oil, and that a more likely best-case scenario is microbial oils around four times more expensive. “I don’t know who is going to pay for that,” commented Lee. However, if more valuable co-products such as amino acids or proteins could be manufactured along with the oil, microbial oils could plausibly compete with traditional palm oil, Chuck said. Price might also matter less if environmentally conscious consumers are willing to accept higher prices for palm oil-free products.

To be viable, microbial alternatives would also need to be joined by regulatory policies phasing out unsustainably produced palm oil and helping producing countries to diversify their economies, said Chuck. Subsides or carbon taxes could also improve prospects for yeast oils, since the carbon footprint of microbial oils is likely to be lower than palm oil cultivated on deforested land. However, the full life-cycle emissions of yeast oils has not been studied in detail.

“How do we make sure we aren’t replacing one terrible thing with another?” said Chuck.

And long before any microbial oils could be made available, curbing the immediate impacts of palm oil production will require more sustainable forestry, Sara Cowling, a spokesperson from the Roundtable on Sustainable Palm Oil wrote in an email. “Our stance remains that palm oil can and should be produced sustainably.” Diana Chalil, founder of the Consortium Studies of Smallholder Palm Oil in Indonesia, added that future deforestation could also be prevented by helping smallholder growers to increase the yield of their existing oil palm crop.

With 70 million metric tons of oil produced each year, there’s room for more than one solution.

Indeed, with 70 million metric tons of oil produced each year, there’s room for more than one solution. Microbial oils would not have to replace all or even most of traditional palm oil production to have significant environmental benefits, Chuck said. They would just have to curb growth in the industry and could start by replacing palm oil in more expensive products, such as cosmetics, the strategy companies such as C16 Biosciences and Xylome are pursuing.

“I don’t think we’re going to disrupt what they’re producing today at all,” said Kelleher. “We really represent an alternative for the growth of the industry.”

It could be the start of a not-so-cosmetic change.