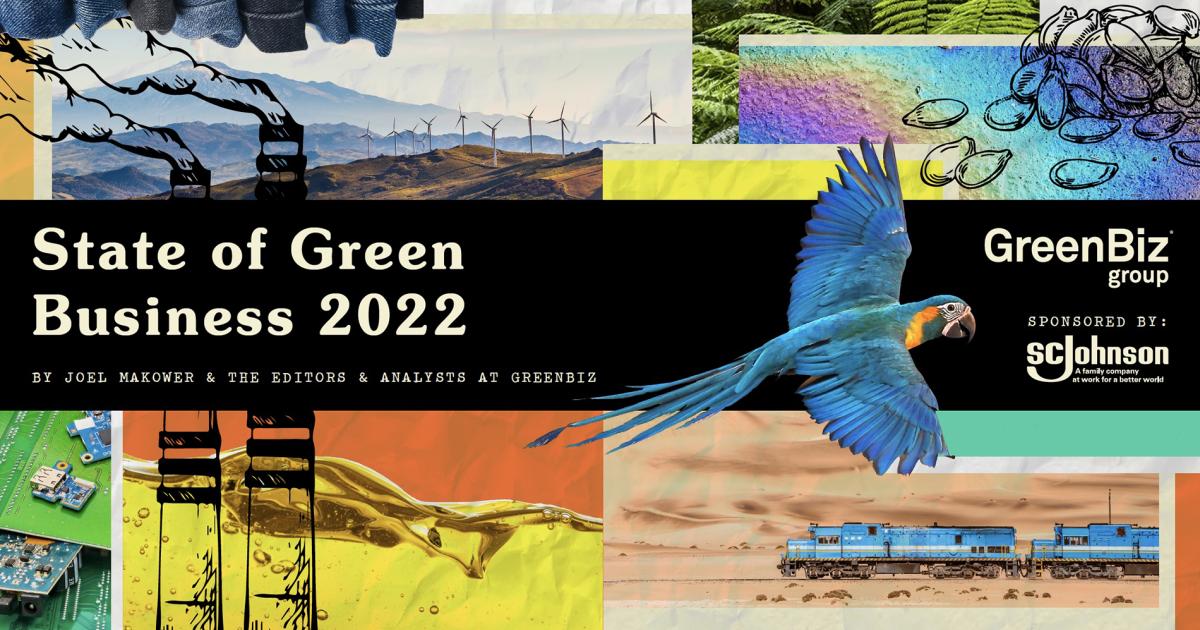 Adapted from the 2022 “State of Green Business,” published today by GreenBiz Group. Download the report here.

We find ourselves in uncharted and unfamiliar territory. Again.

The worlds we collectively inhabit — corporate sustainability, sustainable finance, the circular economy, climate tech — are all reaching inflection points, growing and changing faster than many could have imagined. Along the way, they’re roiling industries, companies, jobs and career paths — mostly for the better but also in a be-careful-what-you-wish-for kind of way.

The Age of COVID has coincided with the rise of nearly every aspect of sustainable business: companies’ commitments to achieving net-zero greenhouse gas emissions; the mind-blowing uptake of green bonds and sustainability-linked loans; the inexorable growth of renewable energy, alongside its declining price; the mainstreaming of electric vehicles; the rise of concern about biodiversity loss and its economic impact, and more.

The worlds we collectively inhabit are reaching inflection points, growing and changing faster than many could have imagined.

Indeed, the past two years of pandemic life seem to have left sustainable business relatively unscathed. With good reason: Despite our self-imposed isolation, the klieg lights focused on companies’ environmental and social commitments and performance have grown increasingly brighter and hotter, in lockstep with the rise of concern about the scale, scope and pace of change. With the signs of a changing climate becoming ever more apparent — and costly — the business world is finally recognizing that sustainability is not merely a nice-to-do activity.

Which is not to say that companies are solidly on the case. True, the pace of change has quickened, with more companies making bigger commitments, but it’s far from what’s needed to address the challenges before us. Carbon emissions, which dropped in tandem with the tanking global economy during 2020, resumed their relentless climb in 2021, faster than many scientists predicted, according to the Global Carbon Project. And scientists expect emissions to rise even further in 2022 as the global economy continues to pick up steam.

That’s just one data point, albeit a significant one, casting a pall over the corporate sustainability landscape. There’s the continued loss of biodiversity spurred by land-use changes from economic growth coupled with the ravages of a changing climate. There’s the ongoing loss of fisheries and marine ecosystems upending the seafood industry. There’s the growth of water stress due largely to population and economic growth: Just over half — 52 percent — of the world’s projected 9.7 billion people will live in water-stressed regions by 2050, with most in developing economies, according to the MIT Integrated Global System Model Water Resource System.

That’s the duality in which the world of sustainable business exists: impressive progress, innovation and achievements, but nowhere near enough to stem the tide of the terrifying environmental and socioeconomic challenges ahead.

Still, there’s no denying that the pace of change is quickening inside companies. The number of consortia, partnerships, initiatives and innovations can be overwhelming, even breathtaking at times. Whereas not long ago, the center of gravity could be found inside a handful of sectors — consumer goods, information technology, retail and apparel come to mind — today, there’s no part of the economy untouched by sustainable innovation.

Witness the rise of climate tech, shorthand for a stunning array of technologies and solutions aimed at decarbonizing business and commerce. They represent the convergence of leading-edge thinking in artificial intelligence, blockchain, green chemistry, synthetic biology, advanced materials, remote sensing and other disciplines and technologies. Individually and in concert, these future-facing advances stand to reinvent large swaths of the economy.

One challenge, and opportunity, is whether and how these innovations scale quickly enough to offset the growing global economy, and whether they will be accessible to those at every rung of the economic ladder — in particular, communities, businesses and individuals in rapidly growing economies in Asia, Africa and South America.

It won’t be easy. If the inequitable distribution of COVID vaccines is any indication, the world’s richest countries are ill-prepared to adequately care for those in need. To the extent that we can view the current pandemic as a peek into the kinds of global emergencies we may increasingly be confronting — well, it’s a sobering reality check.

One bright spot in all this is the world of finance, which has finally recognized both the business risks and opportunities of a climate-changing world. The world’s largest banks, insurance companies, institutional investors and pension funds are increasingly moving funds out of polluting industries — or, at least, companies within those industries deemed to be least prepared to meet the new environmental realities — and into companies and funds that seem to be part of the solutions.

It’s a highly imperfect process. The ability to accurately distinguish climate leaders from laggards continues to befuddle the world’s largest investors and financial markets. Many of the banks that profess to be shifting funding away from polluting companies and industries are still backing coal mines and oil wells. Investment funds purporting to focus on companies that score well on environmental, social and governance (ESG) issues still have polluting companies in their portfolios.

The ability to accurately distinguish climate leaders from laggards continues to befuddle the world’s largest investors and financial markets.

It will be a long, slow process to shift completely away from the bad to the good, assuming we can agree on what “good” even means. The sobering challenge: We don’t have that kind of time.

One area of growing focus are companies’ lobbying efforts and political support of legislation and public policy that can accelerate the kinds of changes scientists say we need to make. For years, companies willing to stand up against the well-funded fossil-fuel lobby were relatively few and far between. That’s just beginning to change. The pressure of activist and advocacy groups pushing businesses to get off the sidelines and take a stand is rising.

If corporations do — and that’s a big “if” — the private sector could further burnish its credentials as a positive force for change. However, if businesses opt for short-term profit over longer-term survival, it will be that much tougher to make progress. Either way, the story of corporate climate advocacy will be one of the more interesting to watch in the year ahead.