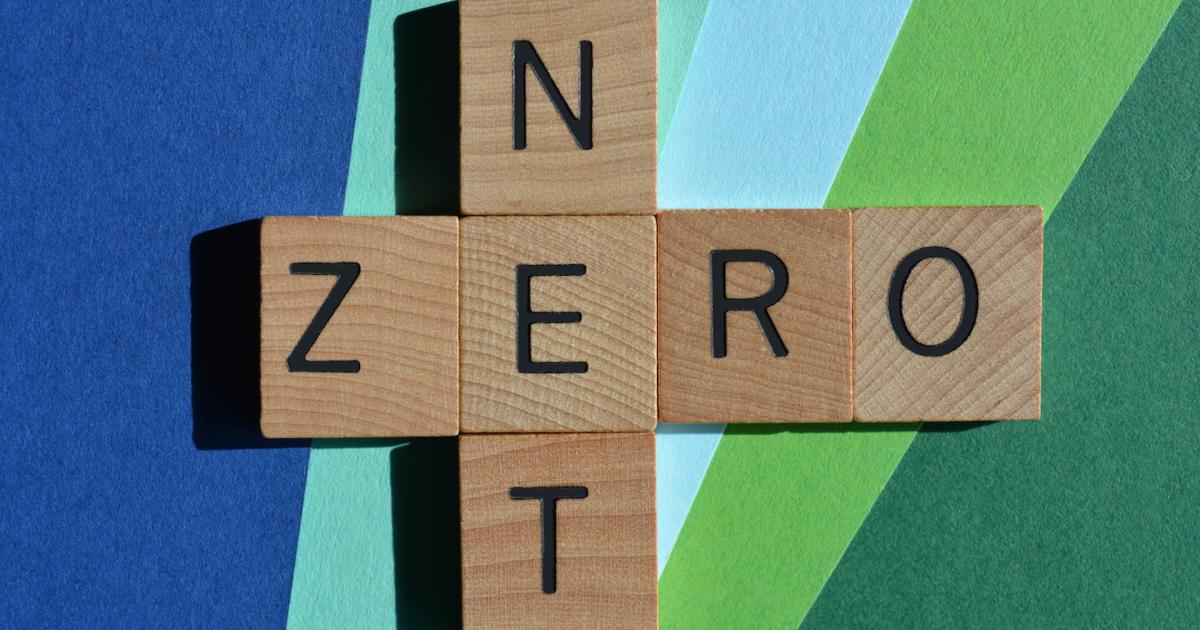 From a slew of company announcements to COP26 in Glasgow, “net zero” dominated conversations in the sustainability world in 2021. Large corporations and financial institutions are increasingly pledging to bring their greenhouse gas emissions as close to zero as possible by the distant deadline of 2050.

However, achieving net zero is not just a simple matter of setting targets. Companies must also lay out clear pathways to reach those goals, and they need to act with urgency.

Scientists say the world needs to attain net-zero emissions by 2050 to limit global warming to no more than 1.5 degrees Celsius above pre-industrial levels to avert some of the worst impacts of climate change. The United Nations Intergovernmental Panel on Climate Change has found that net human-caused carbon dioxide emissions would need to fall by about 45 percent from 2010 levels by 2030 in order to have any hope of achieving net-zero emissions by 2050.

Climate change could have huge financial costs for corporations that don’t act now. Almost 80 percent of the S&P Global 1200, which includes the world’s largest companies, will be exposed to moderate-to-high physical risks from climate change by 2050, according to S&P Global Trucost data. That’s under a moderate climate scenario that assumes strong mitigation actions to reduce emissions to half of current levels by 2080. This scenario is likely to result in warming of over 2 degrees C by 2100, overshooting the goals of the 2015 Paris Agreement.

Under such a scenario, our analysis finds that 16 percent of S&P Global 1200 companies will suffer moderate-to-high water stress risk while 8 percent of major global companies face moderate-to- high wildfire risk. Water stress reflects the balance between renewable water supply and total water withdrawals, including municipal, industrial and agricultural use.

With 70 countries adopting some form of net-zero pledge, either as a proposal, a stated policy or national law, S&P Global Platts Analytics finds about 80 percent of today’s direct CO2 emissions from energy combustion are covered by some long-term net-zero decarbonization target. However, Platts data shows major shortfalls in the expected execution of country-level net-zero targets.

And where governments are not taking the needed policy steps, the private sector might be expected to take on more of the burden of leadership and action.

Companies are moving slowly. Analysis by S&P Global Sustainable1, based on data from CDP, a global environmental disclosure framework for investors and companies, demonstrates that less than a quarter of all companies that responded to CDP’s climate survey and were assessed in the 2021 S&P Global Corporate Sustainability Assessment as of November have set a net-zero target.

The lack of progress by a large universe of companies contrasts starkly with the widespread net-zero commitments made by top firms. Most of the 30 largest companies in several sectors have made net-zero pledges as of December, according to an analysis by S&P Global Market Intelligence. That includes 21 of the 30 largest U.S. and European oil and gas firms, 26 of the largest U.S. utilities and all 30 of the largest American, Canadian and European banks.

The location of a company’s headquarters may also influence whether it can achieve net-zero goals. For example, an analysis by Platts demonstrates that Japan is expected to reduce current emissions by more than 50 percent thanks to favorable policies and regulations, supportive market conditions as well as advances in technology.

Where credit is due

The way that companies tackle the impact of climate change on their business can also influence their credit ratings. Out of 30 ratings changes by S&P Global Ratings on corporates or infrastructure due to environmental concerns in 2021 (through October), 27 of these were negative, with 12 downgrades, while 11 were placed on credit watch with negative implications and four were downward outlook revisions. Most rating changes in corporations due to environmental factors were among energy firms and utilities.

Markets appear to have rewarded companies that are compatible with a net-zero economy. S&P Paris-Aligned & Climate Transition Indices, which track equities collectively aligned to a 1.5 degrees C scenario and net-zero emissions by 2050, have generally outperformed their market cap-weighted parent indices across all regions. While much of this outperformance can be attributed to industry and factor allocation, there is still stock-specific alpha, which is positive for the most part. However, it is important to note that there is no clear evidence to prove this alpha is driven by climate or environmental, social and governance factors.

S&P Global Trucost data shows a general trend of declining Scope 1 and 2 emissions. Scope 1 emissions, which are direct emissions from owned or controlled sources, and Scope 2 emissions, which are indirect emissions from the generation of purchased electricity, steam, heating and cooling, fell 13 percent among S&P Global 1200 companies between 2016 and 2020. There was a 6 percent drop in emissions from 2019 to 2020 alone. That can be attributed in part to the start of the global COVID-19 pandemic, which put a brake on economic activity globally.

Scope 1 and 2 emissions intensity, which is a measure of a company’s carbon emissions relative to the revenues it generates, declined 21 percent from 2016 to 2020 among the S&P Global 1200, signaling that companies can generate revenues while lowering their carbon footprint. However, emissions intensity was unchanged between 2019 and 2020, largely due to a rise in Scope 2 emissions, while Scope 1 emissions fell.

[Richard Mattison is a mainstage speaker this week at GreenBiz 22, the premier annual event for sustainable business leaders]

The real challenge ahead for companies will be how to address Scope 3 emissions, which stem from assets not owned or controlled by the company or organization but upstream or downstream of the company in its value chain. S&P Global Trucost data shows that, on average, Scope 3 emissions account for 84 percent of total emissions.

Scope 3 emissions are inherently harder to calculate, partly because they depend on accurate emissions information from suppliers. The lack of transparency and accountability for emissions created in corporate supply chains is a significant concern when assessing the achievability of net-zero commitments and completeness of reporting against these targets.

The reduction in Scope 1 and 2 emissions comes as the number of companies committing to science-based climate targets has sharply risen. Science-based targets help companies reduce their share of carbon emissions in line with what scientists say aligns with the goals of the Paris Agreement.

As of 2021, more than a third of S&P Global 1200 companies have set or committed to setting a science-based target, according to figures from the Science Based Targets initiative, or SBTi, which has developed a standard for corporate net-zero target setting. Of those companies, 39 percent have also pledged to achieve net zero. In 2016, just 13 companies had set or committed to a science-based target.

The role of mandatory disclosure

Net-zero commitments may be voluntary, but companies with a clear pathway to carbon neutrality will be better prepared for a raft of forthcoming climate-related regulation and mandatory disclosures in jurisdictions around the world. The European Union took the lead in 2018 with the launch of its Sustainable Finance Action Plan, which led to the creation of a broad package of rules that are significantly changing the sustainability landscape. There is the EU green taxonomy — a dictionary of sustainable activities designed to steer companies as they adapt their business strategies to climate change — and several countries are developing their own taxonomies. U.S. regulators are developing a slew of climate-related disclosure rules.

Almost 80% of the S&P Global 1200, which includes the world’s largest companies, will be exposed to moderate-to-high physical risks from climate change by 2050.

There is also growing momentum for making voluntary disclosure frameworks mandatory, such as the influential Task Force on Climate-related Financial Disclosures (TCFD). A strong signal for compulsory TCFD disclosure came in June, when the G7 group of countries said they backed the idea.

Starting in April, the TCFD recommendations will become mandatory for more than 1,300 of the largest U.K.-registered companies and financial institutions. Switzerland has said it would make TCFD reporting binding, and while the EU has not officially adopted the TCFD for its 27 member states, it is undertaking a reform of its Non-Financial Reporting Directive. Calls for consistent climate disclosures also prompted the creation of an International Sustainability Standards Board in November.

There are increasing signs that companies are taking disclosure of the climate risks in their business seriously. There has been a tenfold increase in the number of companies supporting TCFD reporting, with nearly 3,000 companies backing the framework in 2021, according to TCFD data. That compares to just 280 in 2017, the year companies could start disclosing climate risks using the TCFD framework.

It’s important to note that supporting the TCFD is not the same as making climate-related disclosures. A 2021 TCFD status report reviewed the disclosure of 1,651 public companies over the 2018 to 2020 period and noted “significant progress is still needed.” On average, only one in three of the companies reviewed disclosed climate-related information aligned with the TCFD recommendations, although disclosure increased at a much faster pace between 2019 and 2020 than in previous years. Disclosure of climate-related information grew by 9 percent between 2019 and 2020 compared to 4 percent growth between 2018 and 2019.

The role of carbon pricing

Amid the transition to a low-carbon economy, companies will have to factor carbon pricing into their business strategy. Carbon pricing is a mechanism that entices countries and companies to lower their emissions by switching to renewable energy, and is increasingly set by governments or markets to charge emitters for each ton of carbon emissions. A 2021 World Bank report noted that “potential of carbon pricing is still largely untapped, with most carbon prices below the levels needed to drive significant decarbonization.”

Carbon prices in the EU have hit record highs buoyed in part by political announcements, such as measures announced by Germany’s new coalition government to align the country’s decarbonization pathway to 1.5 degrees C.

The lack of progress by a large universe of companies contrasts starkly with the widespread net-zero commitments made by top firms.

Major companies face $256 billion in carbon pricing costs by 2025, representing 10 percent of earnings, according to S&P Global Trucost data. Figures from the CDP show that 43 percent of S&P Global 1200 companies have set an internal carbon price. Twenty-four percent have indicated they intend to do so in the next two years, while almost a third have no plans to do so.

Companies will need to ensure that they step up their commitments to reduce emissions further and have clear net-zero pathways if they are to be in line with the Paris Agreement by 2050. Increasing mandatory disclosure will enable them to assess their climate exposure, while rising carbon costs and internal carbon pricing will act as mechanisms to protect their businesses from the worst impacts of climate change.

After a year when the United Nations warned that the world is facing a “code red” for humanity, progress by the world’s largest companies in reaching net-zero emissions remains worryingly slow. As investors accelerate their net-zero strategies, companies need to be more proactive and transparent in how they are managing climate risk and opportunity. Supply-chain emissions present a particular challenge. Measuring emissions across a business, setting robust science-based targets and reporting climate-related risks in line with TCFD recommendations will set companies on the right road to achieve net zero.