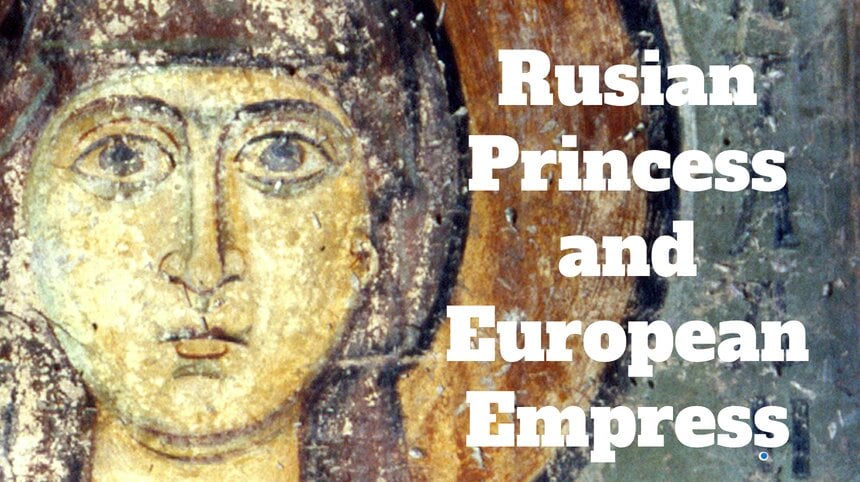 In the summer of 1089, the German chronicler Ekkehard records that, “The Emperor celebrated, in Cologne, his wedding, taking to wife the widow of Margrave Udo [Henry III] the daughter of the king of the Rusians.” The ceremony was conducted by the Archbishop of Magdeburg, who married the German Emperor Henry IV to princess Evpraksia, daughter of the Rusian king Vsevolod Iziaslavich. After the wedding, Evpraksia was crowned empress of the German Empire, which was also celebrated in a later diploma of Henry IV’s, under the name Adelheid. Though many Rusian women had married royalty from throughout Europe in the eleventh century, Evpraksia was the first to become an empress. Her story is a fascinating one, and one which sheds light not only on Rus and the German Empire, but on relations throughout Europe.

Evpraksia’s marriage to Emperor Henry IV was not her first. Her first husband though was also named Henry – Henry III of Stade, who was margrave of the Saxon Nordmark. The couple were approximately the same age at the time of their marriage, in the middle teen years, which was normal for elite marriages in this period of European history. The rationale for the marriage of a Rusian princess and a German margrave runs through the politics of medieval Europe as a whole, as well as the always fraught issue of church-state relations.

Emperor Henry IV faced opposition from Pope Gregory VII in something which has since come to be called the Investiture Controversy. The crux of the issue was whether or not the emperor, or any secular ruler, had the ability to make priests, bishops, or archbishops, or whether that was the sole purview of the church, specifically the papacy. For centuries, rulers had done just that, awarding benefices to loyal individuals, making them archbishops and building churches and cathedrals. Pope Gregory VII led a reform movement, ultimately bearing his name as the Gregorian Reform. He decided that creating ecclesiastics, churchmen, was only possible for the papacy and individuals appointed by the papacy. While citing ecclesiastical precedents such as the laying on of hands, it also served to centralize ecclesiastical power in the hands of the pope; a not insignificant factor when the church controlled over a third of the total territory of Europe.

As part of his dispute with Pope Gregory VII, Henry IV raised his own pope, Clement III. Clement III has been given the title of “Anti-pope” by modern historians indicative of his status as loser in the battle for the papacy. At the time, however, the situation was not so clear and it looked very possible that Clement III would be recognized by most of Europe as pope, and in fact he did sit in Rome for some time.

To add credibility to his candidate’s campaign for the papacy, Henry IV worked to increase relations with neighbouring powers, in this case also inclusive of Rus. The idea being that if the Rusian Church, largely independent but titularly under the control of Constantinople, could be brought into Clement III’s orbit, it would be a major coup for him. Thus, Henry IV reached out to King Vsevolod to make arrangements for a marital tie to help seal their relationship with one another. King Vsevolod had worries of his own, chiefly the Polish ties of his chief rivals in Rus, the Iziaslavichi family, and Henry IV (often a foe of the Poles anyway) most likely agreed to help Vsevolod if any trouble arose. Given that Henry IV was already married, and much older, the marriage was arranged with a young margrave, Henry III.

Evpraksia’s arrival to marry Henry III occurred in the early 1080s and was recorded in one chronicle record as arriving “in this country with much pomp, with camels burdened with precious clothes and stones, and also with countless riches.” The quote itself is an allusion to the arrival of the Queen of Sheba in Jerusalem from the Bible, the sentiment was clearly intended to apply to Evpraksia. A foreign princess from afar, arriving with great wealth and a train of animals and servants; in fact her baggage train may also have included camels as they were found on the steppe south of Rus. This image also reinforces the idea that princesses did not travel alone – even though she is the only one mentioned by name, clearly it would take a great many people to operate such a baggage train, and thus would end up comprising a small pocket of Rus in whatever land they ended up residing in.

Henry III, perhaps unfortunately for Evpraksia, died soon after they were married and Evpraksia was left a teenage widow, without children. She was turned out of Henry III’s territory when his brother took over as margrave, and she took up residence in a nunnery whose abbess was Emperor Henry IV’s sister. It was only a year or so later that Henry IV’s own wife, Bertha, died (of natural causes) and the two arranged to be married, making Evpraksia empress of the German Empire.

Evpraksia’s second marriage was much longer, but no happier than her first. Clement III’s message to the Rusian Church arrived at the desk of the Greek Metropolitan Ioann II who resided in Kyiv. Unlike the Rusian elite who were happy to marry people from throughout Europe, no matter their Christian faith, Ioann II was part of the Greek ecclesiastical hierarchy who were taking part in the disagreements between the Constantinopolitan and Latin Churches. Thus, there was no hope to be had for an agreement between him and Clement III. It also seems that there was a larger realignment of politics with regard to the Normans in the Italian peninsula, the new pope Urban II, and the Byzantine emperor, and Evpraksia became the agent for some of these changes.

After only a few years of marriage, Evpraksia left her husband and went over to the side of the papacy, led now by one of Gregory VII’s successor, Pope Urban II. On behalf of Pope Urban II, Evpraksia spoke at gatherings of bishops throughout Europe, telling her tale of a young marriage to Henry IV and Henry’s atrocious, abominable behavior which classes him as a “Nicoletian;” a reference to a group from the Book of Revelation known for their sexual deviancy. The presence of a young woman, most likely in her 20s, speaking about sex and sexual relations to a group of bishops was effective and more bishops left the side of Henry IV and came over to support Urban II. The climax of her campaign was a speaking role at Pope Urban II’s papal synod at Piacenza, which marked a high point in his conflict with Henry IV (and perhaps not coincidentally was the beginning of what would become the crusades).

Effectively having won for her side, against her husband’s, Evpraksia left Rome and returned to Rus, via Hungary where she had relatives. In Rus we see her once again in the records in 1106 when she takes monastic vows and becomes a nun. The year is particularly interesting because it is also the year that Henry IV dies. Given the idea that a nun was a bride of Christ, it seems that Evpraksia did not remarry, or commit herself to ecclesiastical life, until her husband was dead. Also, providing us with information about communication between the German Empire and Rus.

The final entry in Evpraksia’s story comes in 1109 when she dies. The Rusian chronicle, always short on information regarding women, provides a comparatively fulsome entry noting that “Evpraksia, the daughter of Vsevolod, died on July 10 and was laid in the Crypt Monastery by the southern portal. A chapel was built over her in which her body lies.” The Kyivan Caves Monastery, or Crypt monastery, was the holies monastery in all of Rus, and her burial there, with her own chapel, is a mark of the esteem in which she was held by the monks and by the elites within Rus who helped decide such affairs. For us as modern people, it is also a good reminder that though Evpraksia married two Germans, including serving as empress of the German Empire, and worked with the papacy, she was not reviled or exiled from Rus, but honored and supported.

The idea of a schism between churches is one that has been read back into the past, but is clearly not current at this time in the eleventh and twelfth centuries. Evpraksia and her life are proof of that.

Christian Raffensperger is the Kenneth E. Wray Chair in the Humanities at Wittenberg University, and currently is the Archie K. Davis Fellow at the National Humanities Center. His work presents Rus not as a principality or a collection of principalities but as one of the realms of medieval Europe. Click here to view his university webpage.

Top Image: An image of a female saint in the Church of St. Sophia of Kyiv, dating to the 11th century – Wikimedia Commons