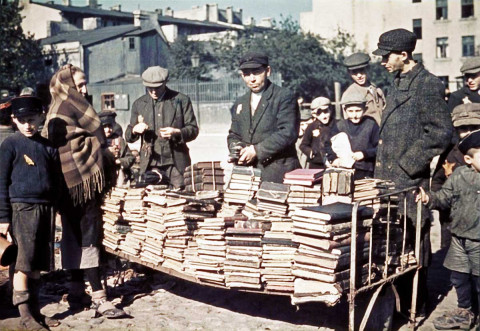 When the Nazis occupied Warsaw in September 1939, anti-Jewish laws were immediately promulgated. Among them were laws limiting access to books. Lending libraries were closed in the Jewish quarter and Jews were forbidden from using public libraries.

A ghetto was established in the autumn of 1940, enclosing nearly half a million Polish Jews into an area of just 2.4 per cent of the city, surrounded by ten-foot brick walls. Their official daily rations consisted of a meagre 184 calories. An estimated 83,000 died from starvation in less than two years and hundreds of thousands were deported to Treblinka extermination camp during the summer of 1942.

While many Jewish leaders and relief organisations in the ghetto were primarily concerned with providing food, clothes and shelter in response to overcrowding, hunger and Poland’s bitter winters, there were some who addressed another hunger.

Basia Berman was among the few Jewish librarians employed by the Warsaw Public Library before the war. Before the ghetto was sealed, she had created a wandering library in her valise, delivering books from her collection to homeless children.

When the Warsaw Ghetto was sealed in November 1940, a branch of the Warsaw Public Library on 67 Leszno Street was included in its boundaries, forcing the library to be evacuated. Berman managed to obtain permission to use the building in the name of CENTOS, a children’s welfare organisation, and covertly established an underground children’s library there.

Many books in her collection were acquired by Lejb Szur, founder of the Tomor publishing house in Vilna before the war. He salvaged books from destruction, gathered banned books and rescued private libraries, stockpiling between 10,000 and 20,000 books for a lending library in his apartment on 56 Leszno Street. Szur frequently separated books from his ever-growing library in the ghetto for Berman’s library. He took his own life during the Aktions (deportations) of 1942.

To mask the treasure trove of Yiddish and Polish books, Berman decorated the rooms with toys, dolls, paper cutouts and simple, illustrated picture books, giving it a child friendly appearance. On occasion, the library also held Yiddish book readings, discussions and lectures. It quickly grew and had designated lending hours.

Berman encouraged children to read Yiddish books, to immerse them in their own literature, language and cultural identity, as a way to resist the annihilation of Yiddish culture along with European Jews. She would lend the children two books, one in Polish and the other in Yiddish. For many, it was their first experience of reading Yiddish and learning the Hebrew alphabet.

Importantly, the children’s library was also providing books for the poorest of the ghetto children, those in hospitals or quarantined for typhus, and refugee children, who were forced into the ghetto from areas outside Warsaw. ‘The thirst for knowledge that the children showed in those terrible times was truly wondrous’, Berman commented in her memoir, City Within a City (2012). ‘The book became a vital need, almost like bread.’ Many books were never returned, taken with children sent to the death camps.

The Warsaw Ghetto survivor Rachel Auerbach recalled seeing a young boy in the courtyard of 66 Leszno Street during an Aktion as his mother gathered their belongings. They were being sent to the Umschlagplatz, the assembly point for deportation. Chaos and confusion engulfed the boy on every side. ‘But the twelve-year-old boy, immersed in his newly discovered worlds, lost and swept away, is standing in the corner of the courtyard, not hearing or seeing what is happening around him’, Auerbach wrote in her memoir of 1974, Varshever Tsavoes (Warsaw Testaments). ‘He is reading a tattered book with a red binding.’

By the spring of 1941 the Judenrat, the Jewish council in the ghetto, was permitted by the Nazi authorities to grant permits for lending libraries, restricting books to Yiddish and Polish. By this time, Berman had been covertly providing the children of the ghetto with reading material for months.

Berman and her husband Adolf escaped from the ghetto in September 1942 and found help on the ‘Aryan’ side of Warsaw, where they became leaders in the Jewish underground. They were double underground activists, posing as Poles and taking on dangerous missions to rescue fellow Jews from the ghetto. After the war, Berman collected books from destroyed Jewish libraries around Poland, some of which remained in Warsaw while others were sent to the National Library of Israel.

As an underground librarian in the Warsaw Ghetto, Berman helped lead the Jewish community in a subtle, yet defiant form of resistance. Books were a source of life and sustenance for the human spirit, a way to preserve one’s humanity amid a dehumanising reality.