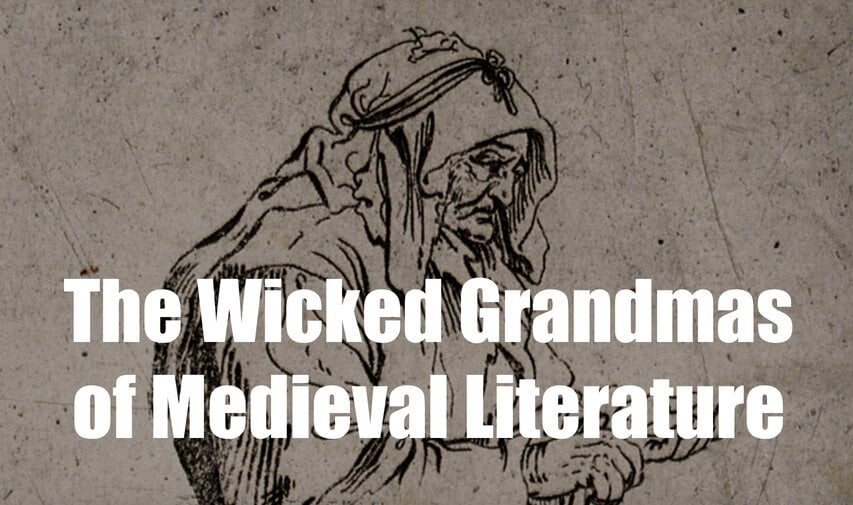 Grandmothers today tend to be understood as kindly and caring, but in the Middle Ages, some of the evilest characters of the literary world were the grandmothers.

You are probably familiar with the story of Sleeping Beauty. A king and queen are unable to conceive a child. With the help of a fairy they eventually do, but after the child is born, the king and queen forget to invite one fairy to the baby’s christening. That fairy is very mad and puts a curse on the child. Despite the parents’ best efforts, the curse is fulfilled when the princess pricks her finger on a spinning wheel and falls into an enchanted sleep. She is rescued from said sleep by a prince after 100 years. They fall in love and live happily-ever-after.

In the original version, the story goes on beyond happily-ever-after. After the rescue, the prince and princess are married and have several children together. Then the prince’s mother, who happens to be descended from ogres, intervenes. She orders a servant to take the children from their mother while their father is away at war. She then tells him to kill the children and cook them so that she can eat them. The servant is unwilling to do that, so he hides the children and their mother and offers a deer to the evil grandma for dinner. Eventually the evil grandmother discovers that her grandchildren are still alive and tries to kill them once again. Fortunately, the prince rides in just in time and throws her into a pit of vipers. You can see why Disney chose to skip that bit.

You might also know that while today evil stepmothers are one of the more common villain characters, in the original tales, mothers and grandmothers were also sometimes evil. The original version of Hansel and Gretel, for example, features a mother (rather than a stepmother) abandoning her children in the woods. The Grimm Brothers changed the character to a stepmother because the idea of a mother abandoning her own children was far too horrific for Victorian sensibilities.

But evil mothers, and especially evil grandmothers, are common to many traditional tales. They are especially common in medieval romances.

Grandmothers in the Middle Ages

Today we tend to think of grandmothers as kindly, caring, and supportive. I personally rely heavily on my mother and mother-in-law to help with my children, and my children’s grandmothers are among their very favourite people. Of course, not everyone is as lucky as I am, but many popular books and television shows foster this image of the kindly, caring, helpful grandma.

The role of grandparents in the Middle Ages, however, seems to have been a bit different. According to Nicholas Orme’s Medieval Children grandparents rarely lived with their grown-up children and seem not to have offered all that much support. While historical records confirm that there were a few rich grandmothers who left bequests to their grandchildren in their wills, the individuals more commonly mentioned as helping with the rearing of children were godparents.

If you look at the literature from the time, attitudes towards grandmothers couldn’t be more different than today. The grandmothers of medieval literature aren’t the kindly figures we know. Most were downright evil. Here are two of my favourites.

The Grandmother Who Ordered the Murder of her Grandchildren

The first grandmother of medieval literature that I want to bring in appears in the romance of the Cheuelere Assigne, which was composed in England sometime in the second half of the fourteenth century. It’s a really remarkable romance, and its primary villain is an evil grandma.

The story takes place in the court of the King of Lyon and his wife Beatrice. Like in many fairy tales, the king and queen are longing for a child, but have been unable to conceive one. Eventually they do, and after nine months, Beatrice gives birth to not one, not two, but seven children. Each is born with a silver chain around their neck.

When Beatrice gives birth, however, the king’s evil mother, who is described as devoted to Satan, decides to create some sorrow. She takes the babies and replaces them with seven puppies. She then accuses the queen of adultery and bestiality and has her sent to prison. She then sends her grandchildren off with a servant, ordering him to drown the children in the first lake he sees. The servant is (of course) unwilling to do so. So, he leaves them in the forest where they are found by a kindly hermit who takes them in and raises them.

Eleven years later, the evil grandmother Matabryne discovers that the children are still alive. She sends another servant to kill and capture them, insisting that he bring the chains back as proof that he has done so. The servant finds them and manages to get the chains off six of them. But, as soon as he removes their chains, the children turn into swans and fly away. One child retains his chain and escapes, staying in human form. The servant returns with a cup he has made from half of one chain, and Matabryne delights in the death of her grandchildren saying that she will now be able to ensure the death of her daughter-in-law and secure the kingdom for herself.

In the meantime, the seventh child, who still has his chain and his human form, learns of his mother’s imprisonment and returns to court to pursue justice. He tells the king that Matabryne is in league with the devil and that he wants to fight for Beatrice. He does, and he wins. Matabryne tries to flee, but the boy pursues her. He catches his murderous grandma and burns her on the pyre intended for his mother. All but one of the children are then returned to their human shape and the tale ends (mostly) happily-ever-after.

Another wicked grandma appears in the Middle English romance Emaré. It was also composed in England in the late fourteenth century. The romance is quite long, so I won’t summarize the whole thing. But, generally, it follows the trials and tribulations of its heroine Emaré, who possesses a beautiful cloak.

A little way into the romance, Emaré arrives in the kingdom of Galys. Eventually, she catches the eye of the king of that country, who decides that he is going to marry her. His mother, our soon-to-be wicked Grandma, opposes the match because she believes that Emaré is a fiend. The king refuses to listen to his mother, and the “old queen” as she is called, leaves, furious and refuses to attend the wedding.

The couple lives happily married for a time and conceives a child. But, while Emaré is pregnant, the king is called away to help the King of France in a war.

Soon Emaré gives birth to a son. A letter is prepared to let the king know of the birth of the child. But the old queen intercepts the messenger. She bribes him with new clothing and money and makes him drunk on ale and wine. When he passes out, the old queen switches the letter with one that tells her son that Emaré has given birth to a devil with three heads: a lion’s head, a dragon’s head, and a bear’s head. She describes the baby as a “foul matted-haired fiend.”

So, the grandmother orders her grandson and daughter-in-law to be cast into a boat with no food or water. Emaré carries her son to the sea where they head out on the water to certain death (to the great delight of the old queen).

When the king returns and discovers the old queen’s treachery, she is sent into exile. Emaré and her son are of course fine, but they go through many trials before they are finally reunited happily with the king in the end.

Why so Many Wicked Grandmas?

As you can see, medieval literature features some pretty wicked grandmothers. This is a stark difference from today which tends to depict grandmothers as kindly and caring.

In the Middle Ages, however, there seems to have been some lingering fear over the potential danger the older ruling generation could present. Both of the grandmothers mentioned above are former queens who lost most of their power when their husbands died and their sons took the throne. They try to regain some power by getting rid of their daughters-in-law and grandchildren.

Far from being kind, caring, and devoted in a motherly kind of way, the grandmothers of medieval literature are powerful and ruthless. They are interested in securing power by any means necessary and perhaps reflect a social anxiety over the deadly impact that the older generation could have.