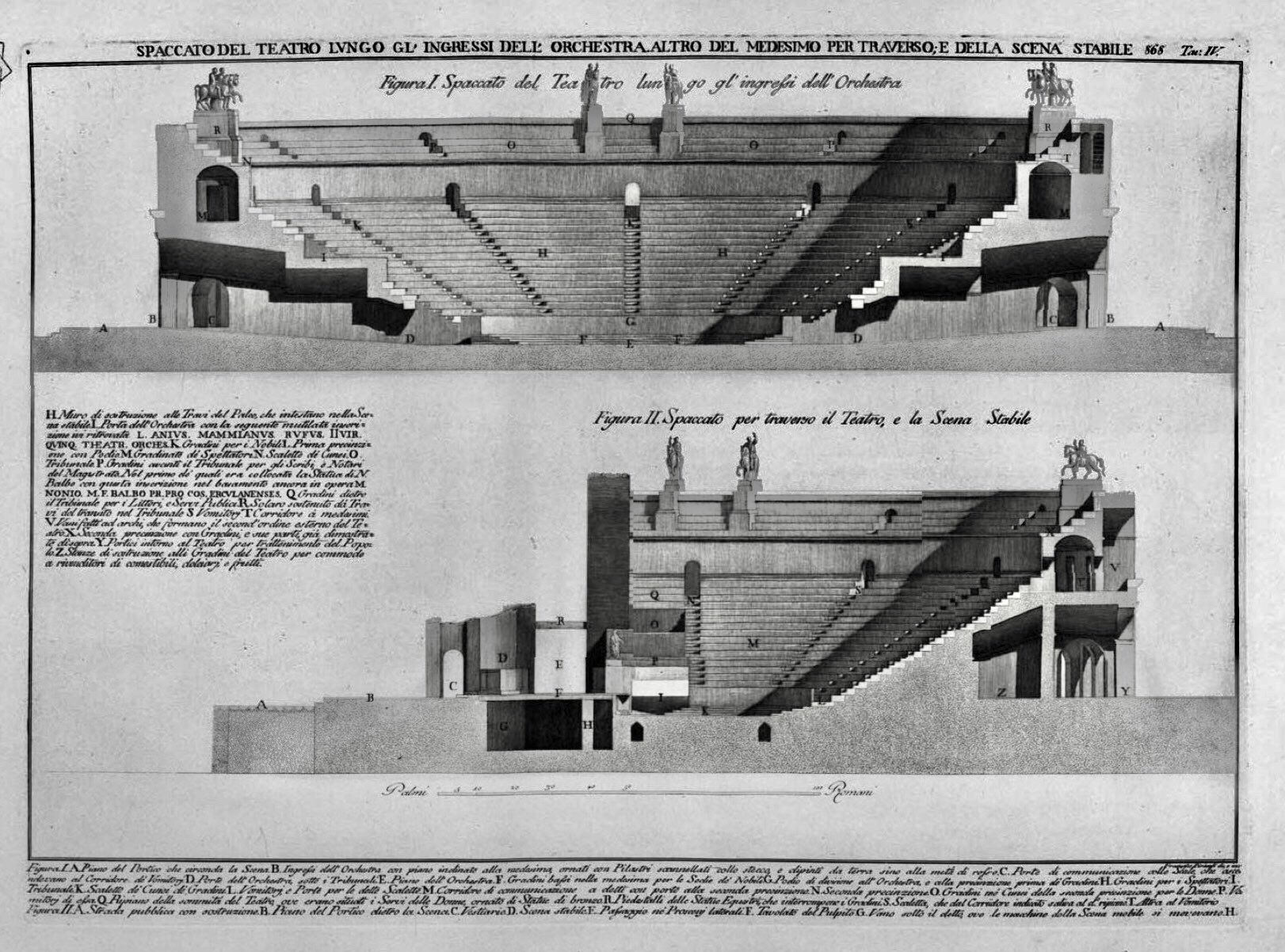 Herculaneum’s theater was built in the 1st century A.D. during the reign of Augustus. Iniscriptions found at the site document the name of the sponsor — Lucius Annius Mammianus Rufus — and of the architect — Publius Numisius. It had a capacity of about 2,500 people (half of Pompeii’s theater) and was designed in the traditional Roman fashion with a cavea divided into three horizontal orders corresponding to the social status of the ticket-holder.

The ancient theater was the first monument to remerge from the hardened volcanic rock that had covered the Vesuvian sites for 1,650 years. What would later prove to be the ruins of the theater were first encountered by a farmer digging a well the early 1700s. When the news that ancient remains had been found filtered back to local potentate Prince Emanuele Maurizio of Lorraine, Duke of Elbeuf, in 1709 he bought the property and funded excavations that recovered, among other artworks, three statues of women that were the first major sculptures recovered from Herculaneum.

The Herculaneum women, elegantly garbed in draped gowns, originally decorated the stage of the Roman theater. Representing honorable women of the elite, they are copies of Greek originals from the 4th century B.C. that were popular throughout the Mediterranean in the imperial era. Unearthed just before excavations ceased in 1711 out of concern that the modern town above would collapse, the statues are now in the Dresden Skulpturensammlung.

The prince had no idea what he was pillaging. He thought it was a Temple to Hercules. It wasn’t identified as a theater until excavations resumed in 1738 by order of King of Naples and Sicily Charles III Bourbon. Much like the Duke of Elbeuf, his aim had little to do with archaeology and everything

to do with harvesting statuary and antiquities to furnish his new palace, and they were systematic about it, digging tunnels that paralleled the architecture to strip it of its decorative statuary, including portraits of the imperial family, local magistrates, gilt bronze equestrian statues and chariots with bronze horses. Even the columns were pillaged. The Bourbon looting program ended in 1762 under pressure from renown art historian Johann Joachim Winckelmann who had sternly criticized the treasure hunting approach to excavation.

It was a popular stop on the Grand Tour in the 18th and 19th centuries, accessed by a Bourbon-era staircase built 65 feet down into the hardened volcanic rock separating the ancient city from the modern one. Visitors today will tread the same path, descending into the theater through the 18th century tunnels. All tours will be guided and limited to no more than 10 people at a time.

“The theater is located in a nerve center for the restitching of the two Herculaneums, the ancient and the modern, where we have concentrated the efforts of urban regeneration to create new public spaces with the collaboration of the Municipality and the Packard Humanities Institute. The theater area is also a privileged place to access the famous Resina market and the historic

center of Herculaneum…. “The visit will be a real exploration experience,” says park director Sirano, “on the trail of visitors who over the centuries have passed through the wells and tunnels created by the engineers of the Bourbon army by torchlight. An underground path that transports us back through the centuries and makes us the protagonists of a discovery that is renewed every time before our astonished eyes.”

The theater will be open to visitors ever Saturday from now until December, minus a two-month summer break in July and August.