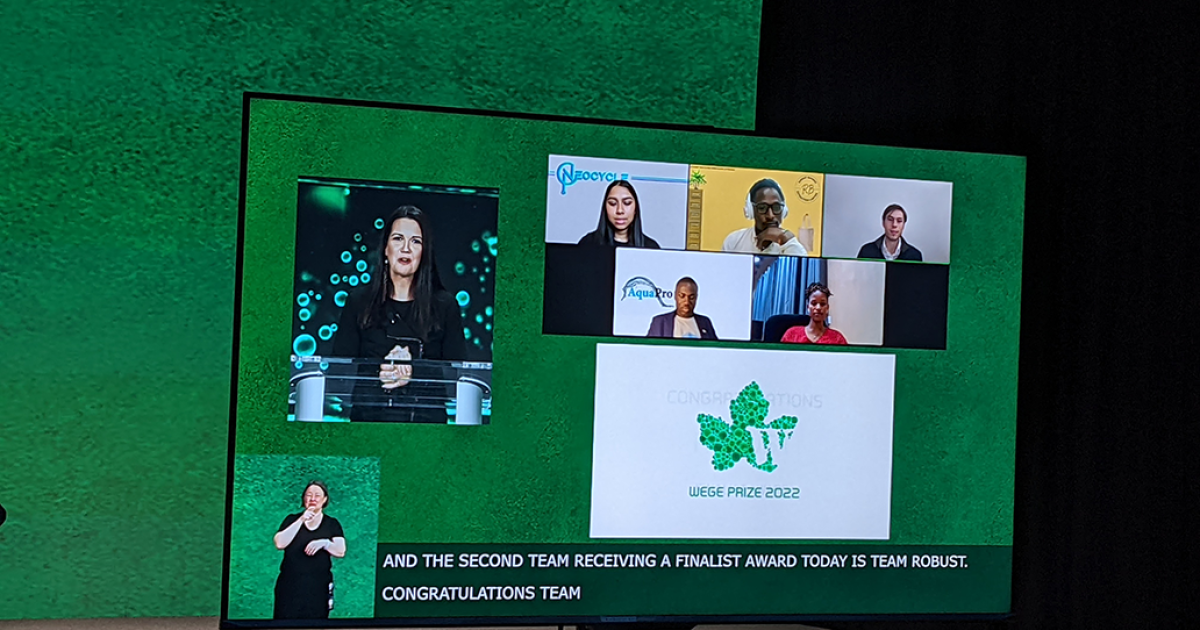 Wicked problems are those that have innumerable causes, are hard to describe and do not have seamless solutions. “Environmental degradation, terrorism and poverty — these are classic examples of wicked problems,” according to a Harvard Business Review article.

Solving wicked problems is the challenge for the Wege Prize, an annual competition that invites college and university students around the world to “collaborate across institutional, disciplinary and cultural boundaries to redesign the way economies work.”

The competition was established nearly a decade ago by the Kendall College of Art and Design of Ferris State University (KCAD), and it looks for five characteristics in solutions:

“With climate change and so many other pressing global issues coming to a head, the world needs people who can work across boundaries to solve problems now more than ever before,” said Gayle DeBruyn, a KCAD professor and leader of the Wege Prize, in a statement. “Every Wege Prize team is advancing a thoughtful and creative approach for helping transition our linear economy of taking, making and disposing, into a circular one that’s restorative by design.”

The most recent competition, which concluded Friday, included a nine-month, four-phase process that required more than a dozen semifinalist teams to grow their ideas from an informal proposal into a robust and feasible solution informed by research, market analysis and real-world prototyping and testing.

(Disclosure: I interviewed the finalists for a video series leading up to the competition.)

Last week, Wege Prize judges shared their feedback on the solutions and crowned three winners. Here are their solutions.

Solution: Create an organic pesticide fertilizer to replace chemical products and increase farmers’ access to this alternative. The product is designed to be used as a pesticide and fertilizer simultaneously.

The product is made from farm organic waste and idle resources, such as invasive bushes growing near forests and bush areas, in various communities. “People don’t know how to make use of [the invasive vegetation] so we want to benefit from those and be able to make our product,” Marie Merci Uwimbabazi, a Green Promoters team member from Rwanda Institute for Conservation Agriculture, told me during our interview.

Uwimbabazi and her four team members grew up on farms, and two of them are studying conservation agriculture, so they’ve used those experiences as inspiration and a knowledge base to help them develop their proposed product.

Problem: Increasing demand for rare earth elements (REEs), which are in short supply

Solution: Use electronic waste to develop a sustainable synthetic biology approach for circular REE extraction, recovery and usage. E-waste, which can end up in landfills, can be a big source for these elements, which Neocycle team member Subasthika Thangadurai from the University of Calgary identified as the two floating rows of elements on the periodic table. (Remember the periodic table of elements?) There are 17 REEs, but here are just a few that you may or many not recognize: uranium; cerium; and holmium.

To extract the REEs, the team uses a protein called lanmodulin to grab onto the elements to extract them. “The biology is a little more complicated than that, but hopefully that’s a clear overview of how it works,” Thangadurai told me.

Neocycle has started establishing relationships with local recycling facilities. “That’s going to be absolutely crucial” as the team starts small, iterates and tries to scale, said Colin Webster, an education program manager at the Ellen MacArthur Foundation and a competition judge, during the awards ceremony.

Solution: Agriculture is one of the major contributors to water pollution, so this team developed an aquaponics system to cultivate Tilapia fish, vegetables and duckweed.

Why these foods? The aquaponics system that this team created is based on circular economy principles. So, the water from the fish tanks, which are high in nutrients, is used for the crops and recirculated through the tanks.

The system is designed to reduce fertilizer application in growing organic crops, cut water usage by 90 percent, maximize crop yield and contribute to the circular economy. Their team’s concept lessens the contribution of agriculture in polluting water bodies because the sources of pollutants, such as chemicals used in farming, are either eliminated or kept in the loop through the reuse of uneaten fish feed and their waste matter.

The team also plans to establish relationships with recycling and composting companies “to make sure the waste from the fish and vegetables are collected, converted to compost and incorporated back into our system,” Joshua Addai Amoah, Aquapro team member from the Kwame Nkrumah University of Science and Technology, told me.

These are just a few examples of solutions to the world’s resource and climate challenges. The teams will continue to pilot and iterate on them, and eventually, they’ll need more funding.

Who will invest in them?