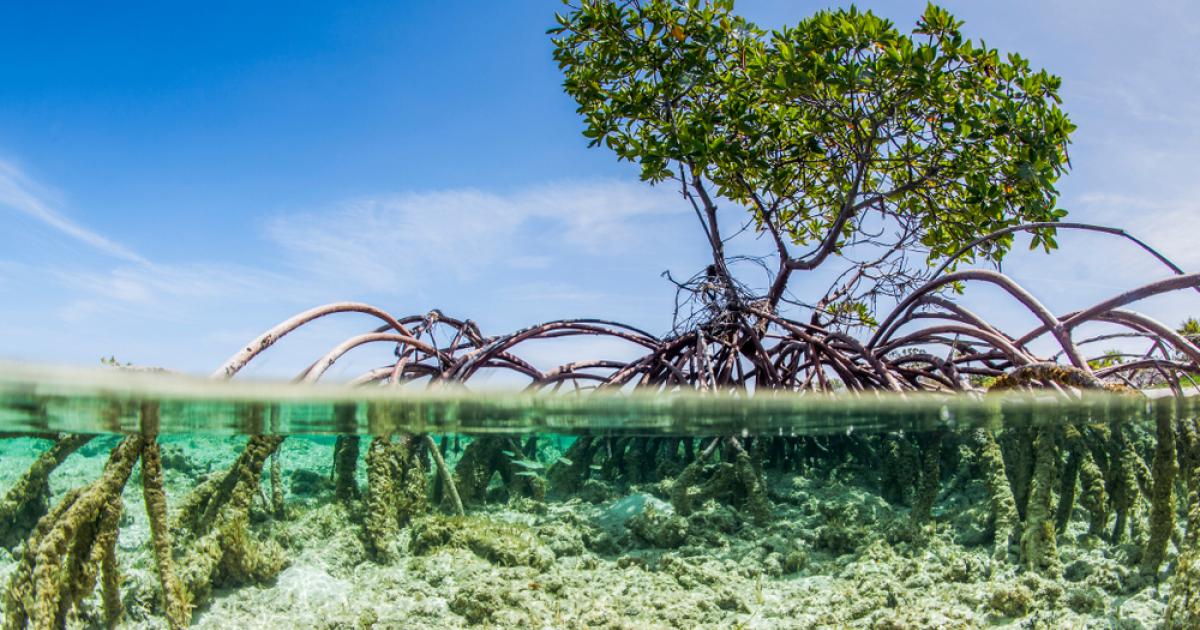 This story was originally published by Grist. You can subscribe to its weekly newsletter here.

Seagrass beds and mangrove trees in the Bahamas’ crystal-clear waters may soon be drafted into the fight against climate change.

The Caribbean country plans to offer “blue carbon” credits this year as a way for companies internationally to offset their emissions, the country’s prime minister announced last week. The island nation will be one of the first to sell ocean-based credits, and hopes to use the proceeds to invest in climate resilience projects.

Coastal ecosystems, such as seagrass meadows and mangrove forests, are some of the world’s most powerful carbon sinks, storing three to five times more carbon per hectare than tropical forests. They do so mainly by storing dead and decaying plant matter in the ocean floor, as well as sequestering carbon by pulling it straight from the air and water. Last year, an international team of researchers found that these marine habitats already store up to 30 billion tons of carbon — nearly as much as the world emitted in 2021 from fossil fuel burning alone.

The Bahamas is home to more than 1,600 square miles of mangrove forests and other marine ecosystems that serve as valuable carbon sinks — at least $300 million worth, according to Prime Minister Philip Davis. But they’re threatened by damage from hurricanes and coastal development, issues that he said the revenues from the carbon credit sales would help address.

“I want to see a Caribbean that is not dumped on any further,” Davis said at the Caribbean Renewable Energy Conference in Miami, according to Bloomberg. “We are a major carbon sink for the world, and we need to benefit from cleaning the Earth’s atmosphere.”

It might allow polluters to keep polluting. It’s like: ‘Watch my beautiful blue carbon project over here, while I’m not doing anything about my emissions over there.’

Carbon offsets work in two ways: Companies can pay to preserve already-existing ecosystems, preventing new carbon from being released into the atmosphere. Or they can finance the rehabilitation of degraded or destroyed habitats, which then go on to absorb additional carbon dioxide. Both methods allow corporations and individuals buying credits to continue polluting, as long as their emissions are equal to the carbon being stored by the project they support — the basis for claims to “carbon neutrality.” In theory, these methods can be an important tool to combat climate change, and conservationists are promoting blue carbon projects as a way to preserve threatened marine habitats.

The Intergovernmental Panel on Climate Change, the United Nations’ major climate body, has promoted blue carbon as a way for nations to meet their obligations under the Paris Agreement, and countries such as the United States, Australia and Kenya have already begun including marine habitats in their carbon accounting. Corporations have also seen an opportunity in blue carbon; Apple and Gucci have both invested in projects that preserve mangrove forests in Central and South America.

But similar carbon offset programs targeting forests and grasslands have been plagued with accusations of fraud; developers have been caught inflating the amount of carbon sequestered by forests or preserving land that was already protected. And some ecosystems have been destroyed by wildfires even after they were claimed for credits.

They’ve also been criticized as a form of “greenwashing,” excusing companies and countries from the work of actually transitioning to carbon-free energy sources — a possibility that some experts fear could be repeated with “blue carbon” credits.

These issues, however, haven’t slowed the rapid expansion of carbon markets, which are expected to be worth as much as $546 billion by 2050, according to BloombergNEF, a clean energy research firm.

“You shouldn’t let anybody convince you or say that this is the silver bullet to solve climate change, because it’s not. The opportunity is actually quite limited,” Cath Lovelock, a coastal ecology researcher at the University of Queensland, Australia, told China Dialogue Ocean. “And it might allow polluters to keep polluting. It’s like: ‘Watch my beautiful blue carbon project over here, while I’m not doing anything about my emissions over there.’”