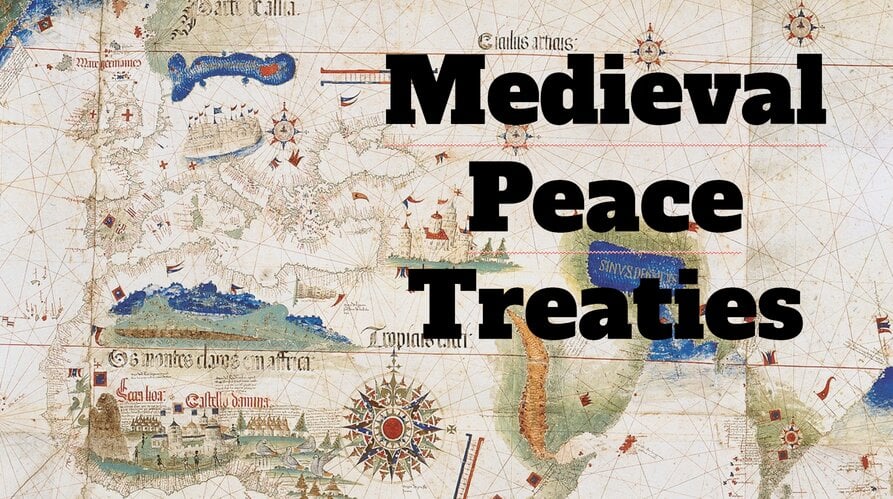 Wars and conflicts rarely end with one side totally defeating the other. Even in the Middle Ages enemies understood the value of diplomacy, and hundreds of peace treaties were signed (although many were not followed). Some would have profound consequences. Here is our list of the ten most important peace treaties of the Middle Ages, arranged chronologically.

This was an agreement between the Muslim rulers of Egypt and the Christian rulers of Nubia (present-day Sudan), in which both sides promised not to attack each other, and to have free trade and travel between their two states. The agreement also stipulated that Nubias would send 360 slaves each year to Egypt, and in return would receive shipments of wheat and lentils. The peace lasted about 700 years, making this the longest-lasting peace treaty in history.

The Carolingian Empire built by Charlemagne and his son Louis the Pious would splinter apart after the latter’s death in 840. After a brief civil war, the three sons of Louis concluded a treaty that split the empire into three states – Charles the Bald would rule West France, Lothair I would receive Middle Francia, and Louis the German would get East Francia. West Francia and East Francia would eventually form into the nations of France and Germany.

The ninth-century would see large parts of Europe threatened by Viking raiders, which would eventually compel the French king Charles the Simple to seek an alliance with a Viking leader named Rollo. In return for defending France against other Norse attackers, Rollo was given the land of Normandy, where he and his followers settled. Rollo also converted to Christianity and married Charles’ daughter Gisla. He and his descendants would establish the Duchy of Normandy, which would become a major force in French, English, and European affairs between the tenth and twelfth centuries.

The Norman chronicler Dudo of St. Quentin adds one more amusing detail to this event. Some bishops there tried to convince Rollo that he should kiss Charles’ foot in recognition of the honours given to him, but the Viking responded:

“I will never kneel before the knees of another, nor will I kiss anyone’s foot.” Thus, urged by the prayers of the Franks, he has ordered a certain warrior to kiss the king’s foot. The warrior, at once laying hold of the king’s foot, has brought it to his own mouth and has planted a kiss on it while standing upright, and has caused the king to topple backwards. And so great laughter and great uproar is occasioned among the people.

To gain Venice’s support in its wars against the Normans, the Byzantine Empire had to give them generous trading privileges, including their own district within Constantinople. The agreement would allow the Venetians great economic advantages, spurring them on to build a maritime empire in the Mediterranean Sea. The Venetians would eventually become even more powerful than the Byzantines.

The Investiture Controversy was a key conflict between the Holy Roman Empire and the papacy, lasting almost fifty years. The main issue was which authority had ultimate control over the appointment of bishops and other important church officials. The agreement made in 1122 was seen as a papal victory, as it limited the role emperors had in ecclesiastical affairs. It would mark the beginning of an era that saw the papacy playing a more active role in European politics.

The Third Crusade began after Saladin, the Ayyubid ruler of Egypt and Syria, captured Jerusalem in 1187. After several years of fighting, the armies reached a stalemate, leading to an agreement between Saladin and the English king Richard the Lionheart. Along with a three-year truce, the treaty solidified Saladin’s control over Jerusalem but did allow for Christian pilgrims to have access to the city.

An agreement between Henry III of England and Alexander II of Scotland that set out the boundary between their two kingdoms and kept the peace for most of the remaining thirteenth century. These borders are largely the same today.

During the Hundred Years’ War between France and England, both sides looked to gain the support of other allies in western Europe. The French made an agreement with Castile, and soon after the English and Portuguese signed their own treaty, which in part says:

There shall be between the respective kings and their successors, their realms, lands, dominions, provinces, vassals, and subjects whomsoever, faithfully obeying, true, faithful, constant, mutual, and perpetual friendships, unions, alliances, and leagues of sincere affection; and that, as true and faithful princes, they shall henceforth reciprocally be friends to friends and enemies to enemies, and shall assist, maintain, and uphold each other mutually, by sea and by land, against all men that may live or die of whatever degree, station, rank, or condition they may be, and against their lands, realms, and dominions.

This alliance has been renewed over the centuries and is considered the oldest active treaty in the world.

In the late fifteenth century the Spanish and Portuguese kingdoms were eagerly seeking to dominate maritime trade in the Atlantic Ocean and take control of the lands discovered by Christopher Columbus – the Americas. After an attempt to get the Pope to mediate the claims, John II of Portugal made an agreement with Ferdinand II of Aragon and Isabella I of Castile that specified the line of demarcation that divided the Americas. Within a few decades, both the Portuguese and the Spanish were able to establish empires through overseas colonies.

By the end of the Middle Ages the House of Hapsburg had become one of the major powers in Europe, with Maximilian I ruling over the Netherlands, Burgundy, and Austria. In 1499 a local conflict led Maximilian to attack the Swiss Confederacy in hopes of taking control of their lands. However, the Swiss forces quickly defeated the Hapsburgs and their allies, and Maximilian was forced to agree to a treaty that formally accepted Swiss independence, thereby creating the state of Switzerland.

These and other peace treaties from throughout history can be found in Carving Up the Globe: An Atlas of Diplomacy, edited by Malise Ruthven and published by the Belknap Press in 2018.

This article was first published in Medieval Warfare magazine Issue IX:4 – you can buy that issue here. You can also get new issues of the magazine through our Patreon – click here to learn more.