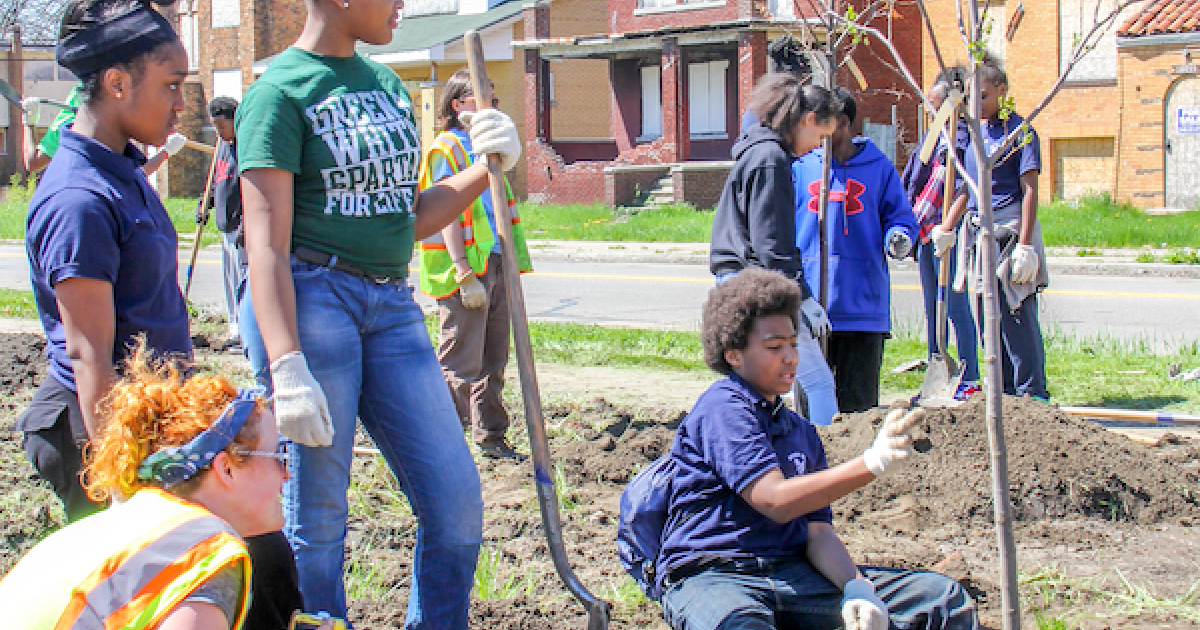 This article is sponsored by American Forests.

In 2007, environmentalist Bill McKibben started the Step It Up campaign, which organized rallies in cities and towns across the U.S. in support of reducing greenhouse gas emissions by 80 percent by 2050 and other goals. A movement was off and running, but the multiple, difficult-to-quantify goals had the potential to hold it back.

That December, NASA climate scientist James Hansen said that atmospheric CO2 must stay below 350 parts per million to prevent catastrophic changes. McKibben and his group immediately saw the potential of this simple data point: a straightforward, science-based rallying cry that would translate easily around the globe.

Their next campaign, 350.org, quickly grew into the leader of the global climate movement. The organization has spurred and led protests and actions around the world, including the International Day of Climate Action in 2009, the first People’s Climate March in 2014 and resistance to the Keystone Pipeline that prompted then-President Barack Obama to reject it.

The success of 350.org in mobilizing action illustrates that while movements are driven by values and vision, data is critical to their effectiveness. Data can support values, frame a problem or theory of change or help tell a story.

Since 350.org’s founding, the democratization of data has broadened how activists, nonprofits, corporations and ordinary citizens can leverage larger data sets for social change on any scale.

One example of this second-generation push is American Forests’ tree equity work, which aims to ensure that the neighborhoods that need trees the most have enough to experience optimal health, economic and climate benefits. With few exceptions, socioeconomically disadvantaged neighborhoods predominantly populated by people of color have less tree cover than wealthier, whiter neighborhoods.

In 2021, American Forests released a first-of-its-kind free public tool, the Tree Equity Score (TES), which combines data on socioeconomic status, existing tree cover, population density and other information for 150,000 neighborhoods and 486 metropolitan areas to give each census block group a score to indicate the relative need for trees there.

TES data makes discrepancies in tree equity clear: Urbanized neighborhoods with mostly people of color have 33 percent less tree canopy on average than majority white neighborhoods. And neighborhoods with 90 percent or more of their residents living in poverty have 41 percent less tree canopy than communities with only 10 percent or less of the population in poverty. These disparities are especially critical, because people of color living in socioeconomically disadvantaged neighborhoods are particularly vulnerable to climate change impacts. For instance, they have higher asthma rates than other groups. And with fewer trees to absorb air pollutants, they are more exposed to smog — a dangerous air pollutant that can make it difficult to breath, triggering asthma attacks and spiking emergency room visits. This has become a severe issue as climate change-induced heat waves are increasingly common, and heat intensifies smog.

Anyone can access TES data via a simple easy-to-use platform from which they can download data or explore the data from within a map. Advocates, organizations, corporations and community members can use this tool to make an evidence-based case for where to plant trees to improve tree equity. Armed with this evidence, they can mobilize and build support for government and business to invest in planting in those locations. As a result, municipalities big and small are using TES to create more equitable living conditions, showcasing how easily accessible data can catalyze an inclusive movement for change.

An example of this dynamic is the city of Phoenix, which in 2021 pledged to use TES to create tree equity across the city and increased its funding for urban forestry by $1.6 million. In one of the first actions of that effort, the Arizona Sustainability Alliance (AZSA) used the TES map to identify the lowest-TES census block groups in El Mirage, a town near Phoenix, and found a tree-less elementary school there at which to do plantings. The group approached the school principal and municipal officials about the effort and found a warm reception. Without the data to help them choose where to plant and by their own admission, AZSA would have simply asked, “Who do we know in El Mirage?” to get started on the project. What they discovered in using TES instead is that people respond to objective data that helps to convey priority and need.

Corporations, for their part, rely on TES to identify where the greatest needs to support urban plantings exist and provide educational outreach. For example, Microsoft supported the El Mirage planting that was driven by TES data, and Salesforce is assisting the city in meeting its other goal to increase tree canopy in each of its 185 parks to 25 percent. Bank of America is supporting the development of Tree Equity Score Analyzer in Phoenix, a deeper-dive tool that will provide more specific information on neighborhoods and individual parcels of land where trees can be planted in order to achieve equitable tree cover.

TES is helping fuel a movement to green our cities and advance equity at the same time. TES data that anyone can access helps cities and even individuals make the case for planting trees where they’re most needed. Doing so helps create a world in which everyone can experience the health, wealth and resiliency benefits trees provide, regardless of their race, income or location.

For more information about Tree Equity Score and how companies, cities and nonprofits are using data to make tree-planting decisions, contact [email protected]