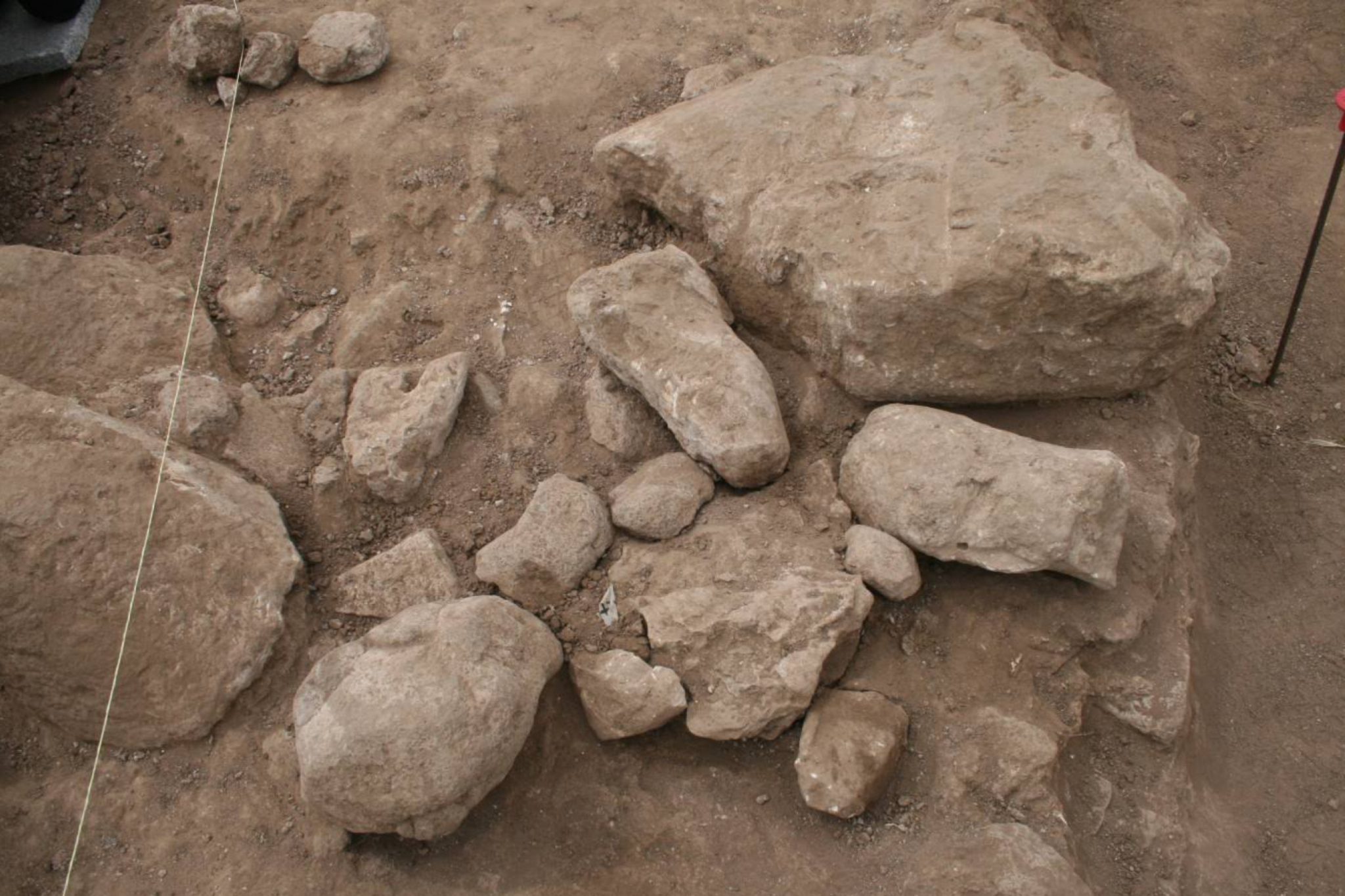 A new excavation of a prehistoric necropolis of Mont’e Prama in Cabras, western central Sardinia, has unearthed the fragmented remains of two giant statues from the Iron Age Nuragic culture. Two large torsos, a head and other fragments recover indicate the statues were of a form known as Cavalupo-type boxers, characterized by their nude torsos, short skirts and the curved shield they hold over their heads or in front of their bodies.

The necropolis was first discovered by accident in 1974 when farmers stumbled on ancient tombs and a funerary road. The tombs date to between 950 B.C. and 730 B.C. when the Nuragic civilization, named for the “nuraghe,” stone towers of indeterminate purpose they erected all over the island, was the dominant culture on Sardinia. Subsequent excavations at Mont’e Prama discovered thousands of fragments of monumental sculptures that were reassembled as much as possible to reconstruct 28 statues representing different types of fighters — 16 boxers, five archers and five warriors. They are now on display at the Giovanni Marongiu Civic Museum in Cabras.

The statues were not originally placed in the necropolis. They were brought there from somewhere else and deliberately broken. The limestone to make them was quarried not far from Cabras, but the original locations where the finished statues were erected are unknown, as is their purpose and the reason for their destruction. It’s not even clear when they were broken, whether it was the result of an internal struggle between Nuragic communities or by invaders like the Phoenicians of Tharros in the late 7th century B.C. or the Carthaginians in the second half of the 4th century B.C.

After the earlier excavations in the 1970s and early 1980s, there was a lull of 30 years before archaeologists returned in 2014. Over the next two years, thousands of fragments of more sculptures were found and two boxers were recomposed from them. Archaeologists are back again now, and this time they’re taking a multi-disciplinary approach, working with anthropologists, restorers and architects to gather as much information from the context as possible and to recover the fragmentary sculptures with a conservatorial perspective.

“While the small and medium-sized fragments are found daily, documented in situ lying on the ground and then recovered,” said the Superintendent, Monica Stochino. “The two large and heavy blocks of the torsos will need time to be freed from the sediment that envelopes them and so we can prepare what we need for their safe. “The discovery,” adds the Superintendent, “rewards the constancy and validity of the archaeological method of progressive exploration through preliminary probing and systematic investigation phases, measured and carried out in the ways and times allowed by the availability of resources and the parallel elaboration of excavation projects, restoration and exhibition of the finds and enhancement of the site.”

The current excavation will continue throughout the spring, and the Superintendency has already secured funding to the tune of 600,000 euros for the next excavation. They’ll be pouring four times that amount into an even more daunting project: the restoration of sculptures found in fragments during the 2014-2016 dig. The museum will be expanded and updated to accommodate the influx of Nuragic giants.