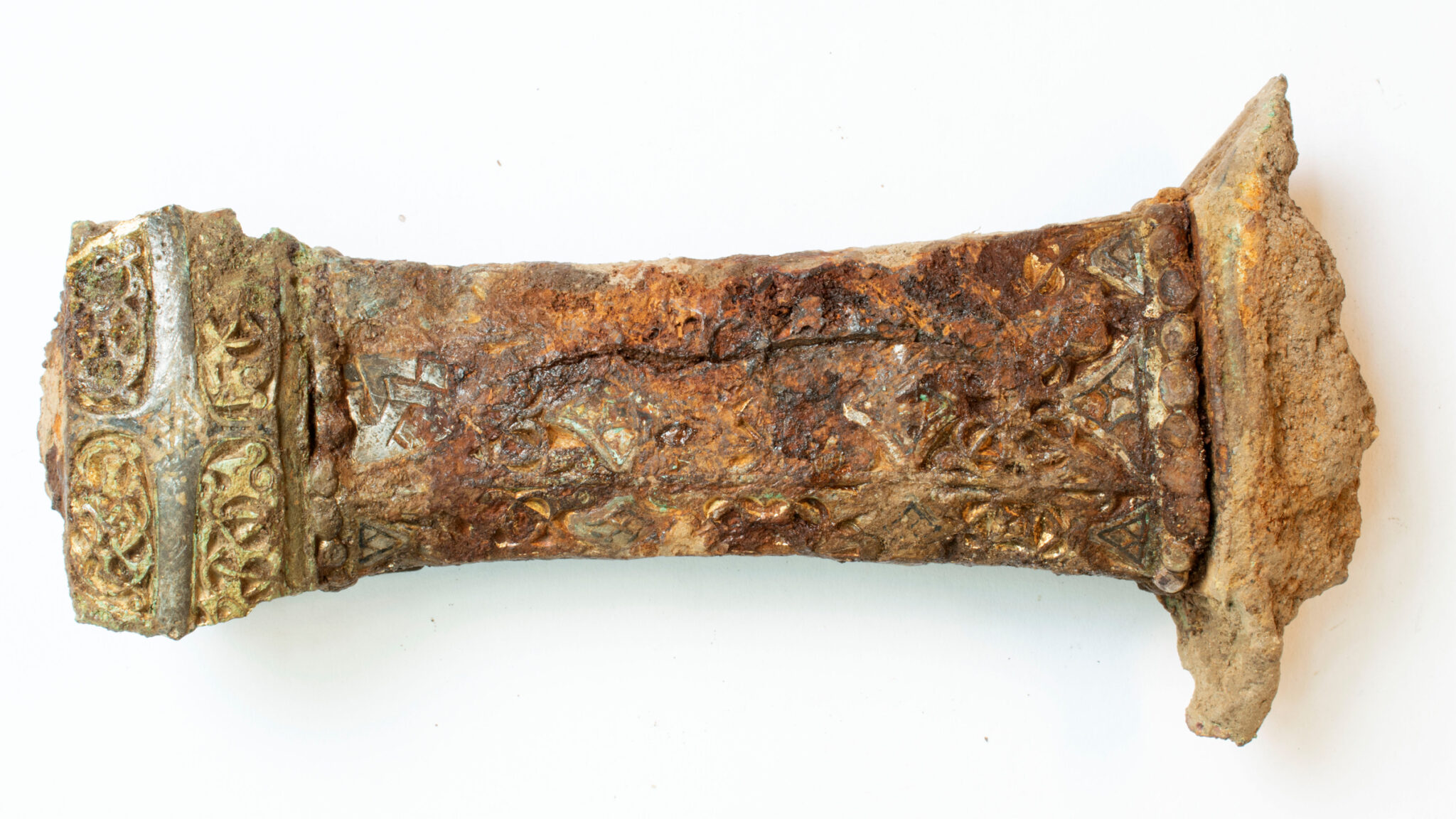 Two pieces of a Viking sword hilt of exceptional quality and rarity have been reunited after 1200 years. The first piece was discovered last year by a metal detectorist in a field in Stavanger, southwestern Norway. It was a small irregular piece and the finder had no idea what it was, so he handed it in to the Stavanger Museum of Archaeology for further investigation. A year later, a friend of the finder returned to the field and found a large sections of an ornately decorated sword hilt. Museum conservators realized this was a match for the little fragment found the year before.

The hilt is from the most ornamented and heaviest Viking sword types, known as a D-sword. Only about 20 D-type sword pieces have been found in Norway, and they were either imported and/or copied meticulously by local smiths. The decorative style dates it to the early 9th century.

It is still difficult to see the details in the hilt, but the décor includes gilded elements of the typical animal styles found during the Iron and Viking Age, from ca 550-1050, according to the press release. The hilt also contains geometrical figures in silver, made with the so-called niello technique. This means that a metallic mixture of sorts was used to make black stripes in the silver.

Both ends of the crossguard are formed as animal heads.

“The technique is of a very high quality, and both the lavish and complicated decor and the special formation of the crossguard make this a truly unique find,” archaeologist Zanette Glørstad from the Museum of Archaeology, University of Stavanger, says in the press release.

The closest comparable example is a bronze sword hilt with silver gilt inlay and niello enamel discovered on the Isle of Eigg (now in the National Museum of Scotland in Edinburgh ).

The hilt pieces were found in the Gausel area of Stavanger on a field adjacent to the farm where the richly-furnished tomb of a Viking woman was discovered in 1883. Dubbed the Gausel Queen, the elite woman was buried with 40 artifacts of exceptional quality — bronze, silver and gold jewelry, knives, drinking horns, a cooking pan, fittings from a reliquary box — including rare and expensive imports from Ireland.

The Queen was not alone. Other Viking graves have been found there, and many more are known to have been destroyed during agricultural work. Even with spotty old archaeological practices, accidental discoveries and looting marring the archaeological record, more and more varied Medieval Irish metalwork has been discovered in this area than in any other place in Europe. Archaeologists believe this part of the coast was one the major departure points for Viking ship voyages westward across the North Sea.

The hilt is now undergoing cleaning and conservation before it goes on permanent display at the museum.