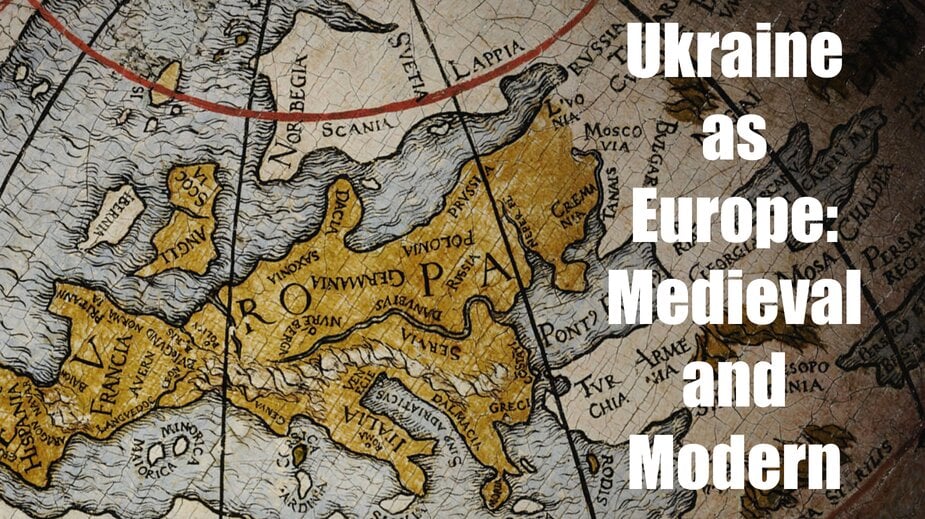 On Thursday, February 24, Vladimir Putin initiated an invasion of Ukraine. Some commentators immediately said that it was the first land war in Europe since World War II, intentionally or otherwise ignoring conflicts in Georgia, Azerbaijan, and the Balkans. But the roots of the current war, and many of those other conflicts, can only be understood through looking at the medieval history of the region.

One of the underlying, though often overlooked preconceptions regarding the debate over whether to defend Ukraine, or how far to defend Ukraine, are our ideas about what is and what is not Europe. Is Ukraine part of Russia as Vladimir Putin has contended in his article, “On the Historical Unity of Russians and Ukrainians”? Is it part of Europe, as we saw with attempts at Association Agreements with the EU in the last decade? I would suggest that modern history does not have the answers to this issue and that, as Putin did, we need to go back further to understand the early history of the region to accurately understand that Ukraine is, and was, part of Europe. If we can shift our perceptions of what is and is not Europe, it will help make the argument that Ukraine should be defended against aggression.

As part of a justification of his annexation of Crimea, Putin contended that “Kiev is the mother of Russian cities.” This statement is both right and wrong. Beginning in the tenth century, Kiev was the capital of a polity known as Rus, or Kievan Rus, which extended from Novgorod in the north nearly to the Black Sea in the south. Over the next three centuries this polity extended to the northwest to control area between the Volga and Oka Rivers, territory which would become the heartland of Muscovy, an entirely different polity.

During the medieval period, Kievan Rus was part and parcel of medieval Europe. There are many ways to demonstrate this fact, but one is the immense interconnectivity of the ruling families of Europe. Just in the eleventh century alone, Rusian women became the queens of France, Hungary, Poland, Norway, the empress of the German Empire, and one just missed out on becoming queen of England as well. These women, when they married into other kingdoms in Europe, took with them a confessor, servants, soldiers, and others and their court was a center of Rusian influence. In the case of France, the Rusian woman – Anna Iaroslavna – married Henry I Capet. It was her influence that led to the newly introduced name, Philip, of their son; a name which would become quite common in French history. Anna also left a record of her royal rule, signing a document ANNA REGINA (Queen Anna), utilizing Cyrillic script. These women are representative of the connections that Rus made with the rest of medieval Europe.

Though, if we choose to go beyond those, we can see robust economic connections which stretched from Scandinavia to and through Rus, going both to Central Asia and to the eastern Roman Empire, better known as Byzantium; but also ties proceeding from the German Empire to and through Rus in an east-west route as well. Religious ties for Rus were not just with Byzantium, as is often discussed, but with other religious leaders such as the papacy. In the second half of the eleventh century, for instance, Pope Gregory VII crowned a Rusian king, and Pope Urban II sent relics and a service for St. Nicholas to Kiev as part of arranging ties with Rus. Rus was part of the medieval European political, economic, and religious world.

If all of this is true, then why do we not consider Kyiv, the capital of modern Ukraine, as part of Europe? A big reason for this is that scholars in both Russia and the West have created divergent narratives of the progression of history. In the West, we have privileged a progression from Greece to Rome and from Rome to England and France and eventually to the United States. This narrative creates a normative version of medieval and early modern Europe that is largely focused on the West and the eventual nation-states of England and France via their predecessors. Russia has done the same: their narrative goes from Rome to Byzantium to Rus to Muscovy and thus Russia, creating a continuum that connects Moscow, the modern Russian capital with Constantinople and Rome in an attempt to aggrandize and legitimate the Russian nation-state. That narrative took Rus from European history and added it to Russian history.

There were, of course, protests to this construction of narratives. In the late nineteenth and early twentieth century, Mykhailo Hrushevsky wrote a multi-volume series entitled, History of Ukraine-Rus’ which laid the foundation for the idea of Ukraine as a nation-state, claiming Rus for its own past. Hrushevsky was not just a historian, and a good one, but also serving as the first president of the Central Rada, the parliament of independent Ukraine following the collapse of the Russian Empire in 1917. His Rus though, was not just a precursor to a modern nation-state but a polity integrated into the European political system. The counter-narrative offered by Hrushevsky was only successful in a few circles and struggled to gain ground against what he called the traditional scheme of Russian history.

Can medieval history change our perceptions of a modern conflict? The most positive answer I can give is only a maybe. But it is vital to understand how and why our perception of the world was created. If we can understand that Putin’s narrative is grounded in a traditional scheme of Russian history that ran unopposed for centuries because western scholars were interested in burnishing the history of the West and its associated nation-states, then we can also understand why it is difficult to convince even the educated public of those western nations why Ukraine is part of Europe; and also why Ukraine is worth defending. It has often been observed that history is a river, and given the modern environmental turn we know very well that it is important to understand what goes into the river upstream to understand the consequences downstream.

Serhii Plokhy, The Frontline: Essays on Ukraine’s Past and Present (Harvard Ukrainian Research Institute, 2021) – this can be read online – please see Chapter 3: Russia and Ukraine: Did They Reunite in 1654? and Chapter 18: The Russian Question

Top Image:  Detail of the globe from The Ambassadors by Hans Holbein in 1533