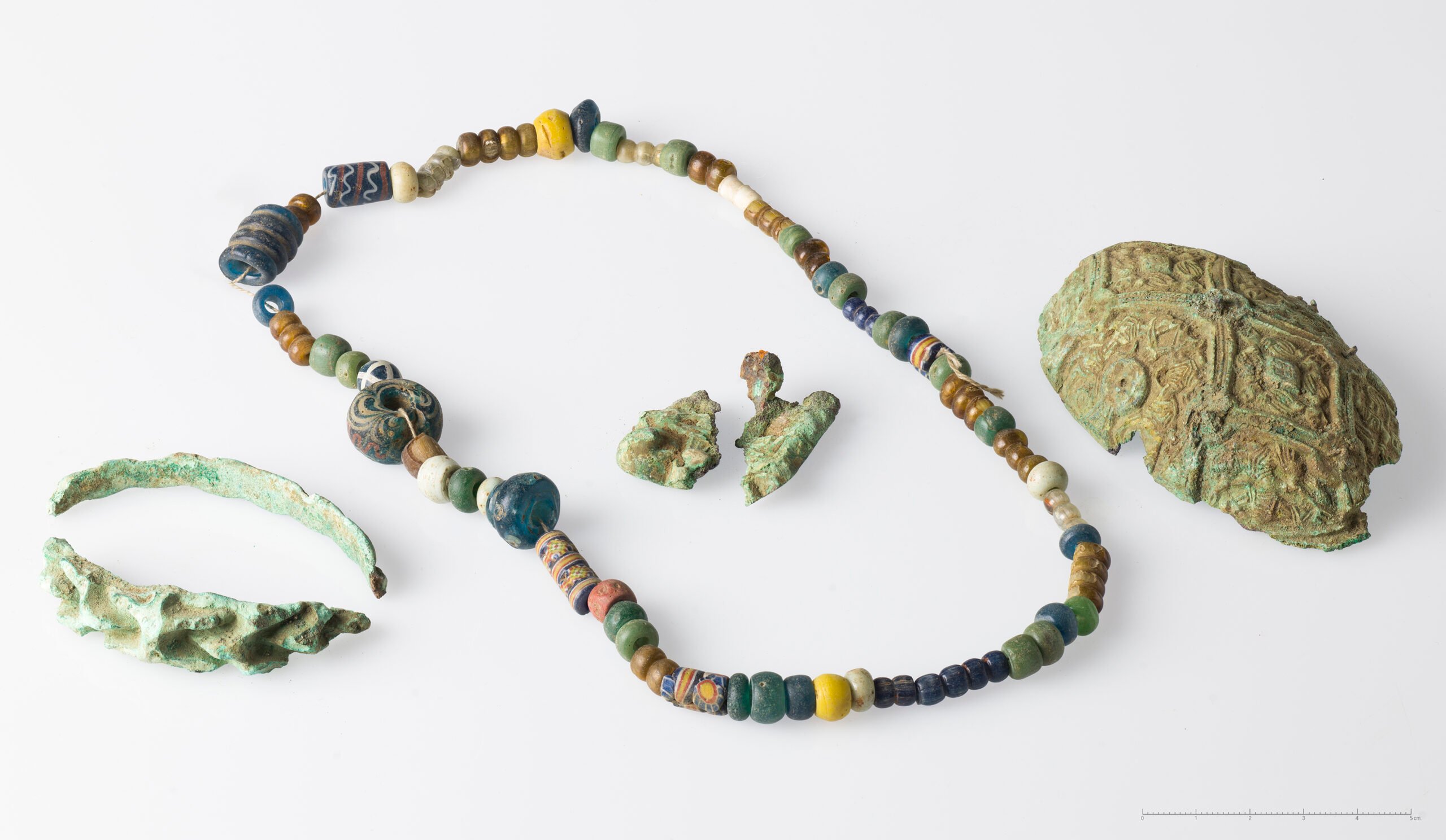 Archaeologists at the Museum of Archaeology at the University of Stavanger could hardly believe their eyes when dress accessories typical of a Viking Age woman was delivered to the museum. Now the archaeologists may have traced the origin of the jewellery.

Archaeologist Kristine Orestad Sørgaard hardly needed to cast a glance at the jewellery to date them. “This find is typical of the Viking Age, she says. “Both the oval brooches with silver plating, the equal-armed brooch and the two bracelets are typical of the period. In addition, the woman had brought with her a string of beads with over 50 beads.”

The oval brooches held up an apron dress and they are characteristic of women’s graves from the Viking Age. They were used in pairs with a third brooch, which held a shawl or cloak together. The beads hung like a chain between the two oval brooches.

The archaeologists believe the find is from the early Viking Age, especially because one of the beads, a mosaic bead, dates from around 850. The beads also include silver- and gold- foiled beads, which were intended to mimic solid silver and gold. Such beads were very popular in Viking times.

The Frafjord-woman would have had a say about this jewellery before she died.

“We believe – based on the careful selection of grave goods – that high status men and women in the Viking Age had thought carefully through what they wanted to bring with them in their graves – to ensure themselves a prominent position also in the afterlife”, says Sørgaard.

The objects were found in Frafjord in Gjesdal municipality, on the southwest coast of Norway. The site itself is interesting:

“A lot of objects have been found in Frafjord and in the southern parts of Ryfylke from the periods before the Viking Age, but very little from the Viking Age itself. Obtaining such a piece in the history of the area is therefore very valuable”, says archaeologist Barbro Dahl, who has conducted many archaeological investigations in the region

Since receiving the find, the archaeologists have searched the museum’s archives to discover that the museum examined a demolished Viking Age grave in the exact same area in 1955.

The well-known Norwegian archaeologist Odmund Møllerop (1922-2006) was then in charge of the excavation of a Viking Age boat grave, containing the remains of a wooden funerary boat over 7 meters in length. The woman was buried with an axe, a heckle, a shield boss, scissors, and an iron weaving sword, but there was no jewellery. “It is tempting to conclude that this is in fact the missing jewellery”, Kris­tine Ore­stad Sør­gaard notes.

Despite working at the Museum of Archaeology since 2006, Sør­gaard has never come across anything like this. She expalins that “We often receive finds from private individuals, but never a find of this size. This is truly a magnificent find and even one we rarely come across on our own excavations.”

The jewellery is currently undergoing conservation at the Museum of Archaeology at the University of Stavanger. The donors do not know exactly when, how or where it was found.

“It is regrettable that we have lost this knowledge and that professionals did not have the opportunity to investigate the site when the discovery was made, since we have thus lost a lot of important information,” says Kristine Orestad Sørgaard. “For example, information about the most remarkable of the beads the woman brought with her: Three beads of blue glass.”

The three blue glass beads of the Frafjord woman are from the early Iron Age and thus several hundred years older than the other beads.

“Either this is heirloom, or the find is mixed with another find from another, much older grave. We will never know”, says Kristine Orestad Sørgaard, who emphasizes that this is the reason why it is so important that private finds are reported as soon as possible.

The archaeologist says that this type of dress accessory was typical of ladies in the Viking Age.

“The Frafjord woman belonged to the upper strata of society, because not everyone was fortunate enough to wear such jewellery,” Sørgaard explains. “The jewellery showed not only what status she had in this life, but also what social position she should take in life after death, and were thus important social markers, not only on earth, but also in the hereafter.”

The Frafjord woman’s equipment testifies to flourishing international contacts and trade. Oval brooches were mass-produced in towns such as Kaupang and Ribe, while several of the beads may have originated in the Mediterranean and the Middle East.

Finds in Norway that are older than from 1537 must be reported and delivered to the cultural heritage authorities.

“Such finds represent Norway’s cultural heritage and are pieces in the puzzle of our historic past. We really appreciate this delivery”, adds Sørgaard.

See more objects from the Museum of Archaeology at the University of Stavanger in DigitaltMuseum.

Top Image: The find consists of two oval bronze brooches with remnants of silver plating, an equal-armed brooch, a large bead jewellery with, among other things, silver and gold-foiled beads and a bronze bracelet. Photo: Museum of Archaeology, University of Stavanger