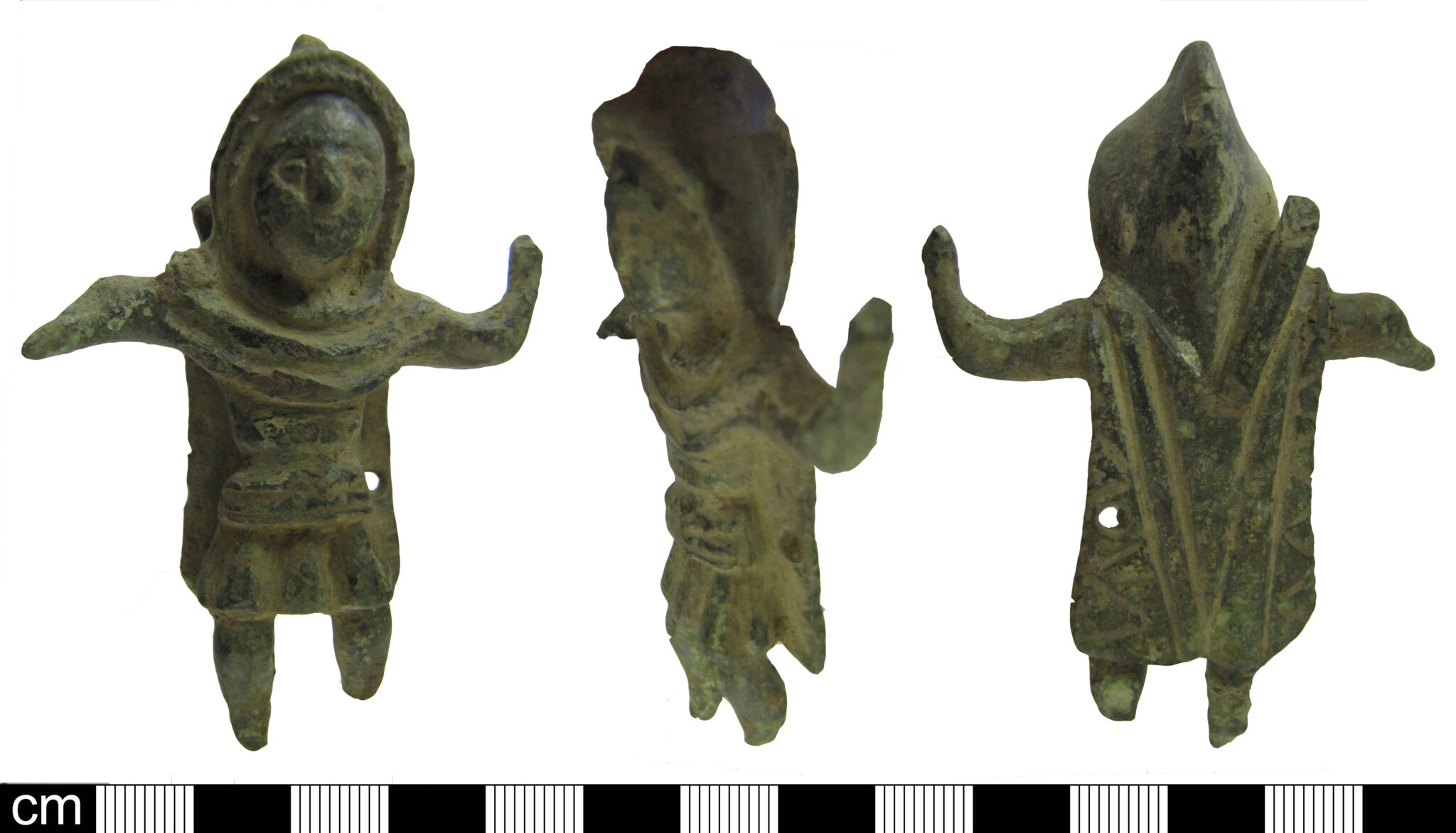 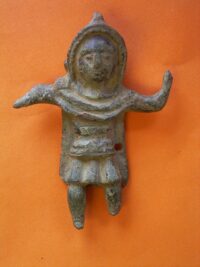 A unique Roman-era copper alloy figurine of a man wearing the birrus Britannicus, the characteristic heavy wool caped hood worn of native Britons, that almost fell through the cracks in the Treasure Act was saved from exile and is now one of the gems of the collection of the Chelmsford City Museum.

The figurine was discovered near Chelmsford in 2015 by a metal detectorist. It is just two-and-a-half inches high and weighs 66 grams (2.3 oz). The arms below the elbows and legs below the knees broke off in antiquity, but the figure’s posture is still evident. The right arm is held out horizontally with the elbow bent so that the missing forearm pointed down. The left arm is bent upwards at the elbow. The left leg is straight; the right bent at the knee suggesting the contrapposto position.

It’s his fashion that makes him unique. He wears a tunic with a pleated skirt belted at the waist. His birrus Britannicus crosses his shoulders at the front and then drapes all the way down his back to his knees. The back of the cloak is incised with a double V from the top of the shoulders to the bottom, perhaps meant to represent a quiver. Small v-shapes in a horizontal orientation decorate the left and right edges of the cloak and the deep triangle of the V. The hood is up, coming to point over the center of forehead that then crests down to the nape of the neck. 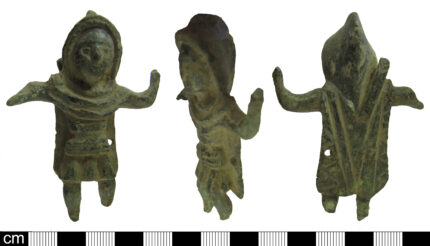 Copper figurines from the Roman period are not in and of themselves exceptionally rare, but they usually depict deities and the ones that do feature people in hooded cloaks are not wearing the birrus, but rather the Gallic style cloak. There are no known parallels of the Chelmsford birrus Britannicus figurine on the archaeological record, even though we know from the Edict of Diocletian that they were exported throughout the empire. Diocletian’s Edict on Maximum Prices (301 A.D.) fixed the price of the British hooded cloak at 6,000 denarii, 2,000 more than the highest quality of military mantle and 4,000 more than the best Phrygian hooded cloak.

An almost identical hooded figure, with contrapposto legs and raised arms, the right hand pointed down, the left up, is depicted in a 4th A.D. mosaic in the dining room at Chedworth Roman Villa in Gloucestershire, southwest England. The floor mosaic features personifications of the four seasons, one in each corner. Winter is wearing a birrus Britannicus over a tunic and trousers. In his right hand he holds a hare from the hunt; in his left hand is a branch denuded of leaves, a symbol of the season. It is the only known Roman-era mosaic depicting of a native Briton.

The figurine was not declared treasure because it’s not made of precious metals, even though it is a one-of-a-kind depiction and was deemed of national importance by the Portable Antiquities Scheme. It was sold for a comparative pittance of £550 ($730), and thankfully when the UK Ministry of Culture deferred an export license to give a local museum a chance to keep this most British of Roman figurines in Britain, the Chelmsford City Museum was able to acquire it.